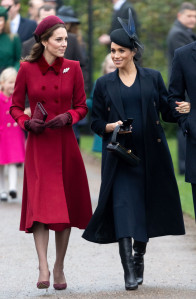 Duchess Meghan can’t escape the royal comparisons. The Suits alum “feels that there is a standard set very high by” her sister-in-law, Duchess Kate, an insider tells Us Weekly.

“It’s discouraging that the British public holds her up to that,” the source adds. “Meghan has this sense of isolation being in the U.K., subject to cruel British media. Her hands are tied and she isn’t allowed to defend herself. It has been very difficult.”

While they both married into the royal family, Meghan, 38, and Kate, 37, come from very different pre-marriage lifestyles.

The retired actress — who wed Prince Harry in May 2018 — was born and raised in California and didn’t move across the pond until getting engaged to the former military pilot, 34, in the fall of 2017. Kate, meanwhile, grew up in England like her husband Prince William.

“They are different women with different roles from different cultures,” the late Princess Diana’s former butler Paul Burrell told Us in April. “Kate knows that Meghan is no threat to her, and Meghan is mature enough to realize that her role is vastly different to Kate’s.”

The Entertaining With Style author, 61, noted that he doesn’t believe there is any “jealousy” between the two ladies, but is “sure that they have differences of opinion.”

“I have no doubt that Meghan is not a ‘yes’ person,” Burrell told Us. “[She] speaks her mind and voices her opinions as an American woman of today would and should.”

Though rumors of a rift between the duchesses have made headlines since before Meghan tied the knot to Harry, the twosome have been “bonding over motherhood” since the Duchess of Sussex gave birth to her and Harry’s son, Archie, in May.

“Meghan and Kate will be spending a lot more time together,” a palace insider explained to Us at the time, noting “they’ve become closer than ever.”