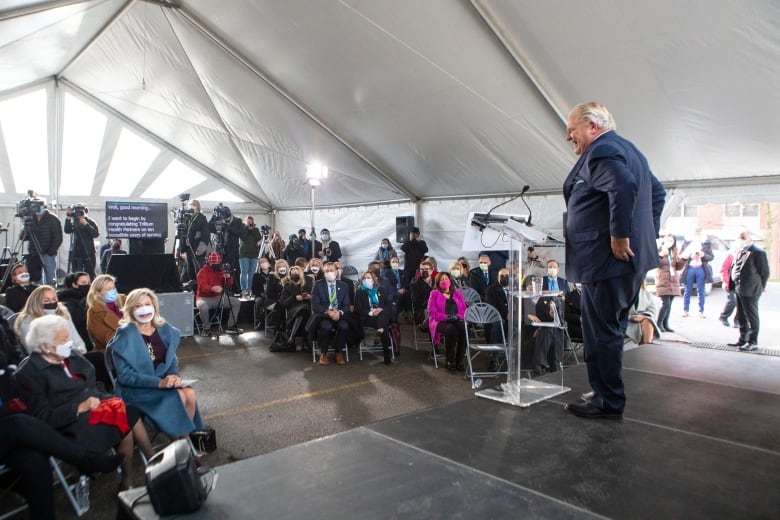 Just three months before Ontario’s provincial election, Premier Doug Ford’s government is spending an unknown amount of public money on an advertising campaign that the opposition parties are slamming as partisan.

“More jobs are being created. Bridges and highways are being built. Public transit is expanding and new homes are being constructed, all for a growing province,” says the narrator of a 30-second television ad, paid for by the government of Ontario.

The timing of the campaign and its upbeat tone have the opposition parties complaining that Ford is using taxpayer money to boost his Progressive Conservatives’ re-election chances on June 2.

The premier’s office refused to reveal the cost of the ads when asked Tuesday by CBC News.

“As we emerge on the other side of this pandemic, we are focused on building confidence in Ontario’s future,” said Ford’s press secretary Alexandra Adamo in an email. “We want people to know that Ontario is one of the best places to live, work, and raise a family.”

The 30-second television ad is running on outlets around the province, and appeared during the NFL’s Super Bowl, which typically has the biggest TV audience and most expensive advertising time slot of the year.

“I think there’s a sense of optimism. I think we’re coming out of the pandemic,” Bethlenfalvy said Tuesday at Queen’s Park. “Ontario is getting stronger. Prosperity, it’s something that we want to really focus on.”

But Auditor General Bonnie Lysyk said the ads are primarily designed “to create a positive impression of the current government,” not to deliver factual information about provincial programs or services.

“The statement ‘Ontario is getting stronger’ needed more content and evidence to back up the claim,” she said in an interview Tuesday.

Since 2005, Ontario law has required all government advertising on TV, radio and in print to be reviewed and approved by the province’s auditor general as non-partisan.

However in 2015, under then-premier Kathleen Wynne, the Liberals watered down the law to narrow the definition of what’s considered to be partisan. The only prohibition now is on ads that explicitly promote the governing party, the premier or cabinet ministers.

Current Liberal Leader Steven Del Duca, who was a cabinet minister in the Wynne government, didn’t answer directly when asked Tuesday if he regrets the change. He instead pivoted to criticizing the premier.

“Doug Ford is focused on an election campaign,” said Del Duca. “He chose to produce ads that were purely self-serving, and that should be something that we all regret.”

Del Duca said the advertising money would have been better spent on promoting confidence in the COVID-19 vaccines for children.

NDP Leader Andrea Horwath described the Ontario Is Getting Stronger campaign as “ads that pump up the government” and questioned the use of public money on it.

She also contrasted the campaign with the government’s move last year to impose strict new limits on advertising spending by organizations that are not political parties, such as unions.

“They muzzled everybody else in Ontario from being able to comment on what the important things are in this election,” said Horwath. “But the government can use public dollars to send out whatever message they want. It’s really problematic.”

Back in 2018, Lysyk found that creating a “positive impression of the governing [Liberal] party” was the primary objective of nearly $20 million worth of government advertising in the run-up to that year’s election.

For purposes of comparison, Ontario law limits each political party to spending no more than about $9 million on election advertising during the campaign period.

The Ontario Is Getting Stronger ads will have to stop appearing on TVand radio after this week. Under provincial law, non-urgent government advertising is banned for the 60 days before the official start of a general election campaign, as well as the campaign period itself. The campaign is scheduled to start on May 4.

The ads can continue to appear on the web because online advertising is not covered by the law.