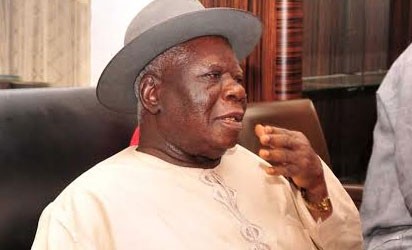 CONVENER and national leader of the Pan Niger Delta Forum, PANDEF, Chief Edwin Clark, yesterday, cautioned militants threatening to recommence bombing of oil installations and declare a Republic of Niger Delta, October 1, on account of Federal Government alleged apathy to the peace process in the region, to back out of the dangerous plot. Chief Clark, who spoke to Saturday Vanguard on phone on PANDEF’s Thursday meeting with Acting President, Prof Yemi Osinbajo, in Abuja, said PANDEF was now satisfied that the Federal Government meant well for the region and also disposed to dialogue with the regional body.

He also appealed to the militants, especially the groups that claimed to have withdrawn their mandate from PANDEF to simmer down, adding: “Rome was not built in day; the Acting President was honest, straightforward and forthright in his discussion with us and I do not see the need for war.”

Clark warned that any militant group that restarts hostilities in the region was on its own, and does have the support of the people of Niger Delta which he is the leader.

On the withdrawal of the November 1 ultimatum earlier given the Federal Government on dialogue, he said the group never issued ultimatum to government, explaining that it only urged it to set up a dialogue team to discuss with PANDEF or the body would pull out of further meetings with it.

However, factional president of the Ijaw Youth Council, Mr. Eric Omare, yesterday, described the withdrawal of the supposed ultimatum given to the Federal Government by PANDEF because of the mere promise of dialogue as “too hasty.”

The South-South leader said: “The press asked me the question after our meeting and I told them that we did not issue any ultimatum to the government, but if they misconstrue it as an ultimatum, we are withdrawing it, that is what I told them,” he said.

The elder statesman told Saturday Vanguard: “Our discussion with the Acting President centered on the 16-point agenda and what government is doing about them, the two-year Strategic Implementation Work Plan, SWIP also contains some things that will be done by the government and the International Oil Companies, IOCs.”

“So I do not what they (militants) are looking for, there is no need to go to war because between now and October 1, government would have started a lot of things based on what they told us. we are appealing to them, they mandated us to do something, government is ready, we had a long discussion with them,

“We are satisfied; government is also satisfied with our advocacy for the region. If there are still grumbles, they should tell us and we will take it up with government, “the elder statesman asserted.

The PANDEF national leader stated: “If we create insecurity in the area, the IOCs we are expecting to come and help us in development of the region will pull out. I can say from our meeting on Thursday that government is ready to act, we should give them the opportunity by being patient.”

He added: “Nobody is compromised among us as some people are insinuating, we are looking for how to improve our region, provide jobs for our youths, and we should give government time. They explained a lot of things to us, including what they are doing in the Ogoni cleanup, the amount Shell is paying yearly, what they are doing about water in the area and so on.”

“We asked questions on the Export Processing Zone, Ogidigben, Deep Sea Port, Gbaramatu, we discussed all these.

“It is true that MEND made a statement, but the representative of the group was with us. What I know is that the MEND people want amnesty, we are working on it, we did not abandon it, it is not automatic. We will see to it that those that merit amnesty based on political nature of their case will be looked into, but the criminality will surely be treated for what it is,” he said.

On the issue of dialogue, he stated: “Yes, government is now open to dialogue, we discussed our insistence on dialogue with Osinbajo and he now understands what we mean by dialogue and said that it will holding from time to time.”

“We told him that we had held dialogue with former military President, General Abdulsalami Abubakar in the time Kaiama Declaration, with former President Olusegun Obasanjo, the late President Umaru Yar’Adua, which resulted in the Presidential Amnesty Programme, and even ex-President Goodluck Jonathan despite the allegation that we did not do anything during Jonathan,” he said.

IYC kicks against withdrawal of purported ultimatum
The Ijaw Youth Council (IYC) worldwide has called on militant groups in the Niger Delta region threatening renewed hostilities to exercise restraint to still give room for peaceful resolution of the Niger Delta question. It is the inconsistent posture and lack of sincerity on the part of federal government towards resolving the issues that has led to agitators running out of patience and threatening to resume hostilities. However, we strongly believe that dialogue remains the best option towards resolving the issues.

“Our demand for dialogue with the federal government is to primarily address the resource ownership and control question which underpin the Niger Delta struggle over the years. It is only a resolution of the resource ownership question which gives the communities a stake in the natural resources found in their land that would lead to permanent peace in the Niger Delta region.

“The other issues on the PANDEF 16 -point agenda such as take-off of academic activities at the Nigerian Maritime University, construction of East- West Road, funding of NDDC, Amnesty programme, Ogoni clean up, etc are only palliatives, but not the root cause of the Niger Delta agitation,” Omare asserted.

According to him, “Therefore, any dialogue between the federal government and the Niger Delta people must be geared toward resolving the resource ownership and control question. We make bold to say that no amount of meeting between federal government and Niger Delta leaders would bring permanent peace to the region without addressing restructuring and the resource ownership question.”