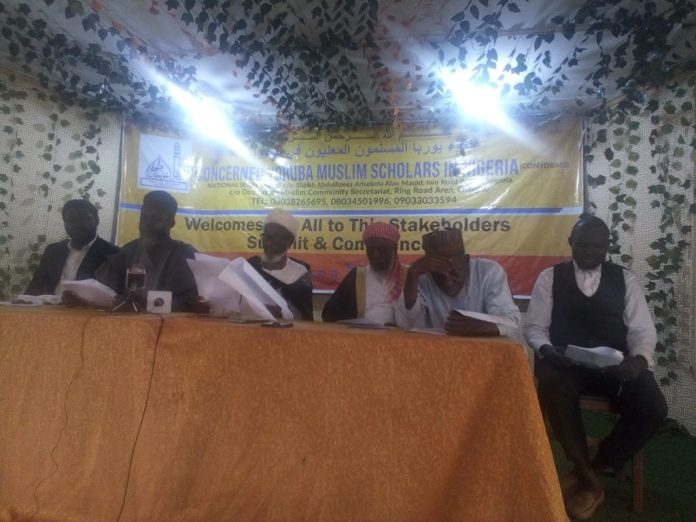 Concerned Yoruba Muslim Scholars in Nigeria (CONYORMS) have advised Nigerians not to complain about the Muslim-Muslim ticket of the All Progressives Congress (APC).

Our correspondent gathered that the decision has attracted several criticisms among some Nigerians.

The CONYORMS has, however, advised Nigerians not to complain about the decision.

CONYORMS while addressing a press conference in Ibadan on Monday said that the former governor of Osun State, Olagunsoye Oyinlola who is a Christian had a Christian Deputy in the person of Erelu Olusola Obada and the Muslims in the state did not complain.

CONYORMS President General, Shayk Abdulrasheed Mayaleke while addressing journalists, insisted that the organisation was shocked by the various oppositions that trailed the choice of Shettima as the running mate to Tinubu.

He insisted that CONYORMS finds it imperative to assert that the choice of Shettima as the running mate to Tinubu is most appropriate and well deserved.

“So, why are we complaining of the Muslim-Muslim ticket. The politicians know what they want. People should not complain.

“The Concerned Yoruba Muslim Scholars in Nigeria are alarmed at the hypocritical public outcry by some section of Christian leaders and followers against the choice of Senator Kashim Shettima as running mate to Asiwaju Bola Ahmed Tinubu for the 2023 presidential election.

“Unfortunately, people who are supposed to be a moral guide for a united and prosperous nation have now become agents of the opposition party just for a miserable price.

“We are greatly shocked at the height of the prejudice being expressed by opposition parties masquerading under different names or groups. It is therefore compelling to remind and enlighten well-meaning Nigerians about the potential of these great candidates who are of unassailable competencies.

“At this juncture, Concerned Yoruba Muslim Scholars of Nigeria find it imperative to assert that the choice of Kashim Shettima as the running mate to Tinubu is most appropriate and well deserved”.