Doctors said this Quebec man would die of COVID-19. His family had other ideas 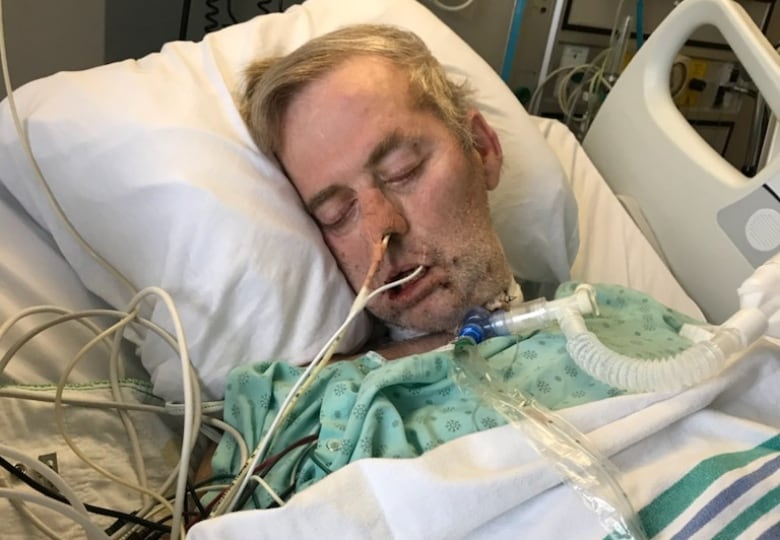 Peter Simard squints into the bright spring sunshine as his wife, Céline Lafrenière, pushes his wheelchair through the front door and down the ramp that’s just been built in front of their Gatineau, Que., bungalow.

“It feels good to be outside in the sun, be able to see my children,” says Simard, 59.

It’s especially sweet because Simard wasn’t supposed to be here. His doctors thought he would be another victim of COVID-19, but his family had other ideas.

Before everything went black, Simard remembers waking up on a Tuesday afternoon in August and picking up the phone.

Simard had started feeling unwell the week before, and that Friday, he learned he’d tested positive for COVID-19. His condition had deteriorated rapidly.

“It was not a joke, you could see he was struggling to breathe,” she said.

They had decided that it was over, and I was not ready for that.​​​​​​– Céline Lafrenière

When the paramedics arrived they gave Simard oxygen, but as soon as they removed the mask he’d start gasping again.

“It’s like someone’s holding your nose and your mouth, and you just can’t get any air,” he recalled.

A week after her husband was admitted, Lafrenière got a phone call from the doctor, who told her, “Peter’s not doing well.”

Simard was put in a medically induced coma and on a ventilator. Lafrenière had seen the statistics.

“I knew it was really, really bad then,” she said.

Buying time for a miracle

Simard tested negative for COVID-19 on Sept. 21, and his family was finally allowed to visit.

“It was really frightening and scary for all of us,” recalled Claire Simard, 37, the eldest of Peter’s five children. “We were all together, surrounding my dad with our love and our energy.”

But patients can only remain safely intubated for so long, so a few days later doctors had to perform a tracheotomy in order to keep Simard breathing on a ventilator. There was a complication, and he contracted a bacterial infection in both lungs.

With his lungs calcifying and his other organs failing, Simard’s prognosis was grim. Doctors called his three adult children and Lafrenière to a meeting on Oct. 3 and told them the medical team had run out of options.

“[The doctor] said, ‘Peter is going to die. There’s nothing we can do. He’s going to die,’ ” Lafrenière recalled.

But the family was adamant that they keep trying, and insisted the doctors continue with the dialysis that was keeping his organs functioning.

“I said, ‘It’s not me or you that’s going to make the decision. He will.’ And I was OK with that, you know? At least we would have tried everything,” Lafrenière said.

“They had decided that it was over, and I was not ready for that,” she said. “I said, ‘You read about miracles every day, why can’t he be one?’ “

She said the doctors got the message. Shortly after the meeting, they began administering prednisone, a steroid typically used to suppress the immune system and decrease inflammation in conditions such as asthma.

“That bought him time. It saved his life,” Lafrenière said.

CBC requested interviews with the medical team that cared for Simard at the Hull Hospital, but a spokesperson for the regional health authority declined the request, citing patient confidentiality.

On Nov. 2, Lafrenière arrived for her daily 45-minute visit.

Even though Simard remained in a coma, she’d spend the first 15 minutes catching him up on family news, the next 15 minutes reading from an inspirational book — Tony Robbins was a favourite — and the final 15 minutes delivering her own pep talk to her husband. She didn’t know if any of it was getting through, but she was going to keep trying.

That day, she walked into the room, said hello, hung up her coat and turned around to see her husband’s eyes half open.

It was the beginning of another long and no less harrowing journey for Simard and his family.

Paralyzed with Guillain-Barré syndrome, Simard was conscious but unable to move or communicate.

His son made him an alphabet chart and slowly, over the next several weeks, Simard was able to let his family know he was ready to make his comeback. Within six or seven weeks of waking from the coma, he began to speak.

Simard’s miraculous recovery continued at Gatineau’s La RessourSe rehabilitation centre, where he continued to impress medical staff. He even earned the nickname “The Cowboy” because of his gung-ho attitude.

“I exceeded every expectation that they set for me because I wanted to come home,” Simard said.

On May 13, he got his wish, returning home to a hero’s welcome, his wife and children at his side as they had been for the last eight and a half months.

The once vigorous 59-year-old knows he still has a long road ahead.

Before contracting COVID-19, Simard played hockey and cut down trees on a plot of forest the family owns in Quebec’s Pontiac region. He’d been promoted to general manager at Benson Truck & Trailer Specialists in Ottawa.

“There was nothing that I couldn’t do,” he said. “Today, I have a hard time lifting up a cup of tea.”

He’s able to walk about 10 metres before he has to sit back down, but just as he did in the hospital and rehab centre, Simard is showing progress every day. He’s aiming to get rid of the ramp in front of his house in six weeks and trade his wheelchair for a walker.

Simard credits his faith and his family and holds no ill will toward the doctors who thought he would die.

“The message is not … that the doctors were wrong. The doctors didn’t know,” Simard said. “My kids weren’t ready to let me go, and I wasn’t ready to go.”

Lafrenière’s advice to other families in a similar situation is twofold: don’t be afraid to question the advice of medical professionals, and never, ever give up hope.

“Don’t let people tell you that it’s over. You wouldn’t give up on yourself, don’t give up [on a loved one] either. That’s when they need you the most.”