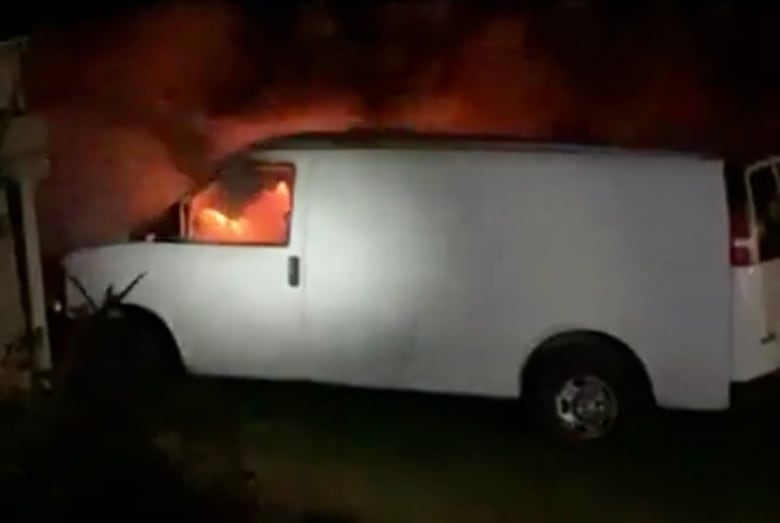 A top RCMP officer requested help to pay for extra policing costs during last fall’s fisheries dispute in southwest Nova Scotia, but the province’s justice minister resisted for two weeks and only agreed after two lobster pounds holding Mi’kmaw catch were vandalized, with one later burned to the ground.

The details of the financial dispute between the province and Mounties are contained in records, newly released to CBC under provincial freedom-of-information laws, that shed light on the overtime and expenses related to pulling in officers from the rest of Atlantic Canada to help police the area.

The Mounties have faced scrutiny for their handling of the tensions that followed the launch in September of Sipekne’katik First Nation’s self-regulated fishery in St. Marys Bay. Critics included federal Indigenous Services Minister Marc Miller who said the force should have done more to protect Mi’kmaw harvesters.

The Sipekne’katik fishery has been opposed by many commercial fishermen, who argue it should not take place outside the commercial season. Some have reacted with anger, and sometimes violence.

The records show that Mark Furey, who was Nova Scotia’s justice minister at the time, finally agreed to pick up the extra policing tab two days after mobs of commercial fishermen stormed the two pounds, in New Edinburgh and Middle West Pubnico, on Oct. 13.

His approval came only after initially balking at a request for help early that month from Assistant Commissioner Lee Bergerman, the commanding officer of Nova Scotia RCMP, who sent a second request just hours before the incidents.

The Justice Department said the province spent $5.1 million for the extra policing between Oct. 14 and Dec. 19.

“It just adds to what we went through. The RCMP weren’t there for us. There were officers in the area who were great, but overall they really failed our people,” he said.

“I remember the day we were stranded at the lobster pound. All day there were saying more RCMP are coming, more are coming. And it was just a bunch of lies. There was never more RCMP coming. So much of it could have been prevented.”

It’s unclear what impact, if any, the financial approvals had on the RCMP’s staffing plans.

“The number and type of RCMP resources that were deployed was based on operational needs,” Cpl. Chris Marshall, an RCMP spokesperson, said in an email. “In order to protect officer and public safety, we don’t discuss our operations, tactics and resources.”

Nova Scotia contracts the Mounties for policing in many rural areas of the province. Under Article 9 of the Provincial Policing Service Agreement, the minister of justice has the ability to approve additional spending in emergencies.

Marshall said the Article 9 request was for “additional and specialized resources to support the implementation” of operational plans.

RCMP maintained “a significant presence in the Meteghan area,” he said, and that included officers from across the province and P.E.I. who had “specialized training in de-escalation and crowd control.” The Meteghan area includes Saulnierville, where Sipekne’katik launched its fishery.

Furey stepped aside as justice minister this winter after deciding not to run for re-election, but remains an MLA and member of the Liberal caucus. CBC contacted his constituency office and the premier’s office several times requesting to speak with the former minister, but did not receive a response.

The records show that even before the province agreed to cover costs on Oct. 15, the Mounties had already sent in extra staff.

Bergerman provided the province with a breakdown of costs between Sept. 17, when the fishery started, and Oct. 4, the day a suspicious fire at a wharf destroyed a boat belonging to a Mi’kmaw fisherman. It showed the RCMP spent $787,835 policing the area during that period.

The exact number of officers involved is redacted in the documents.

On Oct. 2, Bergerman wrote to Furey saying she had sent RCMP vessels, underwater recovery and water transport teams, the provincial tactical team, members of the major crimes unit and “other specialized policing resources” to the St. Marys Bay area, in addition to asking for help from other provinces.

Bergerman requested help under Article 9, writing it would support sending more resources to St. Marys Bay and possibly Potlotek in Cape Breton, given plans for a self-regulated fishery there, “until we are confident that the current dispute and tension between Indigenous and Commercial Fishers in this province has been resolved and can be managed with resources within “H” Division.”

Furey, who was an RCMP officer before he entered politics, did not approve that request. The minister responded on Oct. 7 asking for further details about why the situation fit the article’s definition of an emergency — “an urgent and critical situation of a temporary nature” — and asked whether the federal government was responsible.

He referenced situation reports he had received that showed the extra officers who were initially deployed had gone back to their normal positions, leaving the Meteghan RCMP, the closest detachment to Saulnierville, to respond to “fishing related service calls.”

Request for help with ‘continued state of tension’

The same day commercial fisherman would descend on the two pounds, Bergerman responded to Furey’s questions, writing the Meteghan detachment was “a small unit that does not have the capability or capacity to appropriately deal with a large scale and volatile fishery dispute while at the same time maintaining service delivery to the communities they police.”

In that Oct. 13 letter, she asked for approval for additional policing “as a precautionary measure given the continued state of tension between Indigenous and Commercial Fishers and DFO.”

Furey approved her request on Oct. 15, referencing a phone conversation they had the previous day.

Sack, the chief of Sipekne’katik, said he has had numerous conversations with Furey and then-premier Stephen McNeil about his community’s concerns. That Furey didn’t consider what was happening in St. Marys Bay an emergency “goes back to systemic racism,” Sack said.

“Our people were left stranded,” he said. “For the province to be aware, and just sit back thinking about it, that doesn’t sit very well.”

On top of what was happening on the water and on the wharfs, with hundreds of non-Indigenous commercial fishermen setting up lobster-trap blockades in Saulnierville and in nearby Weymouth, Sack said members of his community were being threatened on social media.

He said they tried to work with the RCMP and pass on all relevant information.

“We expected — the whole serve and protect — that we would be safe. But for there to be six police officers dispatched and there to be hundreds of commercial fisher people. Just the ratios didn’t match up.”

He still thinks had RCMP laid charges faster, it might have changed things. Even after more police arrived, he said people still didn’t feel safe.

“That definitely didn’t change,” he said.

Sipekne’katik plans to resume its lobster fishery in June, outside the commercial season. Sack said his community’s safety continues to be a concern. He recently announced Sipekne’katik was contacting the United Nations asking for it to send peacekeepers.

To better understand what has changed – and what has not – since the 1999 Supreme Court ruling in the case of Mi’kmaw fisherman Donald Marshall Jr., CBC Indigenous reviewed two decades of coverage on Mi’kmaw fishing rights. 9:40

Last October, Sack and many others criticized the RCMP’s response to the violence, saying the force hadn’t done enough to protect Mi’kmaw fishermen.

Politicians debated the response in an emergency session of the House of Commons. Miller, the Indigenous Services minister, said the RCMP had “let down” Mi’kmaw fishermen grappling with the arson and abuse. Some called for the resignation of RCMP Commissioner Brenda Lucki when she defended the RCMP’s conduct.

Federal Public Safety Minister Bill Blair said he had approved a request to send RCMP resources to the area from other provinces.

That same week, Lucki wrote to Furey, saying Blair had approved the “temporary withdrawal of up to 10 per cent of the members of the Provincial Police Services from P.E.I. and N.B.” to be deployed and that the Nova Scotia government would cover all the associated costs.

Furey went on to approve Bergerman’s subsequent requests for extensions that allowed the extra support to continue into December, when the local commercial lobster season started.

“I appreciate that this situation is complex and ever changing the resources beyond the capacity of the division are required to maintain public safety,” Furey wrote on Oct. 27, the records show.

Bergerman wrote on Nov. 9 that the funding was covering extra police in “Yarmouth, Digby and Shelburne Counties as well as Richmond County.” On Dec. 1, she also said tactical officers from New Brunswick, P.E.I. and Newfoundland and Labrador had been in place for six weeks.

Earlier in 2020, Furey approved up to $3.7 million in extra spending under Article 9 to bring in additional RCMP officers to police rural detachments after 70 officers took leave in the wake of the mass shootings that killed 22 people, including Const. Heidi Stevenson.

However, Furey declined to extend that extra spending beyond August, even though numerous times Bergerman requested the support continue, given some regular members and civilian employees from the RCMP communications centre remained on sick leave as a result of the shootings.

Though the number of officers was redacted from records, Bergerman said that left 250 shifts that needed to be filled in September, in addition to the usual sick leave and leave associated with COVID.

At the beginning of September, Bergerman wrote to Furey again saying that due to the “acute situation” she planned to redeploy officers from traffic services for three months, and Furey approved sending up to 15 Mounties to the north-east Nova Scotia district.

There are about 1,450 RCMP employees in the province.