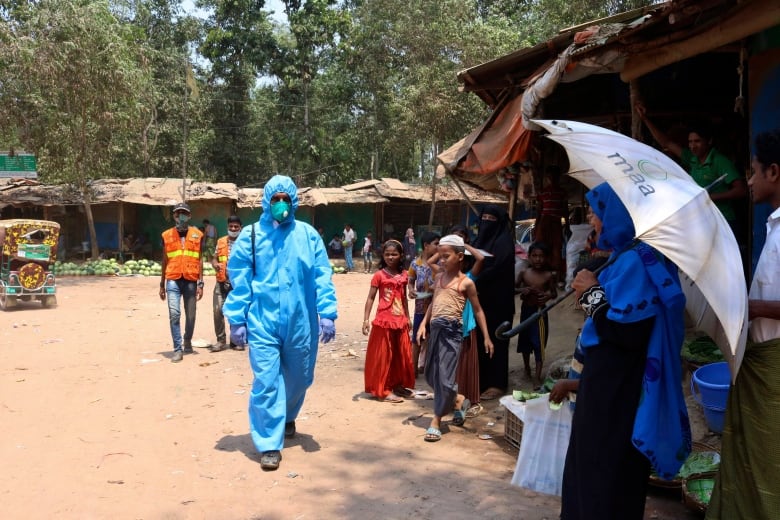 Dr. Fozia Alvi frequently travels from Airdrie, Alta., to Bangladesh, where her foundation Humanity Auxilium sends teams of doctors every other month to provide medical relief to some of the one million Rohingya refugees living there.

This week, the pandemic forced her to watch from afar as the first COVID-19 case appeared in the world’s largest refugee camp, which is home to some of the most crowded and unsanitary conditions on earth.

“It’s like a catastrophe waiting to happen,” she told CBC News.

“There’s absolutely no way to limit the spread of COVID-19 there.”

Alvi, a family physician in Alberta who was nominated for a Nobel Peace Prize for her humanitarian work last year, has been travelling to the region since 2017, when Myanmar’s army began mass killings of the country’s minority Muslim Rohingya population.

Canada was the first country to recognize the mass killings as a genocide, something Myanmar’s government has denied.

Alvi said the World Health Organization recommendations to wash hands frequently and physically distance are “a joke” to anyone who has seen the crowded camps, where most residents do not have access to clean water.

In the tents where medical treatment is provided, she said she can touch each wall by stretching out her arms, and often has to leave to catch her breath as the tents have no ventilation.

There is no electricity or access to ventilators or intensive care centres in the camps, she said — in the entire country of Bangladesh, there are less than 2,000 ventilators for the country’s 160 million people and ICUs are already full.

On Thursday, the first COVID-19 case was confirmed in the Bangladesh camps.

International aid workers have cautioned the pandemic could decimate refugee populations and shared fears that donors, facing crises at home, will forget about the more vulnerable communities abroad.

COVID-19 isn’t the only catastrophe that could be bearing down on the Rohingya refugee camps.

June is monsoon season in Bangladesh, and on Saturday, the Global Disaster Alert and Coordination System issued a red alert, cautioning that a cyclone is expected to make landfall in the small country on Tuesday, bringing a storm surge, heavy rainfall, strong winds and flooding.

Alvi, fears the additional psychological trauma for a population where many have witnessed murder and experienced physical and sexual violence, could push their physical and mental health to its limits.

“I would like to remind people that these people are victims of genocide,” she said.

Alvi’s organization is providing virtual training to health-care professionals and NGOs on the ground. While the Bangladesh government has disconnected internet access in the camps, at night, aid workers leave the camps and can access the internet from their own residences, where they can receive the training.

But she said she’d like to see the Canadian government step in and do more to help a population that was already so vulnerable before the pandemic hit.

In 2018, Canada pledged $300 million over three years to respond to the refugee crisis, a number that was half of what Canada’s special envoy to Myanmar, Bob Rae, had recommended.

Hundreds of refugees were rescued after two months at sea, who had tried to flee to Malaysia to escape the poor conditions in the camps but were denied entry due to fears they would spread COVID-19.

“More than half of them were children. They ran out of food rations five days into their journey and they were in the water for two months. There are lots of dead bodies, they were tossing them in the water,” she said, adding that smugglers had beaten and raped some of those trying to escape.

When the refugees were rescued, they were returned to the camps they had tried to flee.

“The Rohingya need hope, they need a vision of themselves for the future … it’s the basic human right that every human life deserves,” she said.

More than 22,000 people have tested positive for COVID-19 in Bangladesh and 328 people have died, as of Sunday.