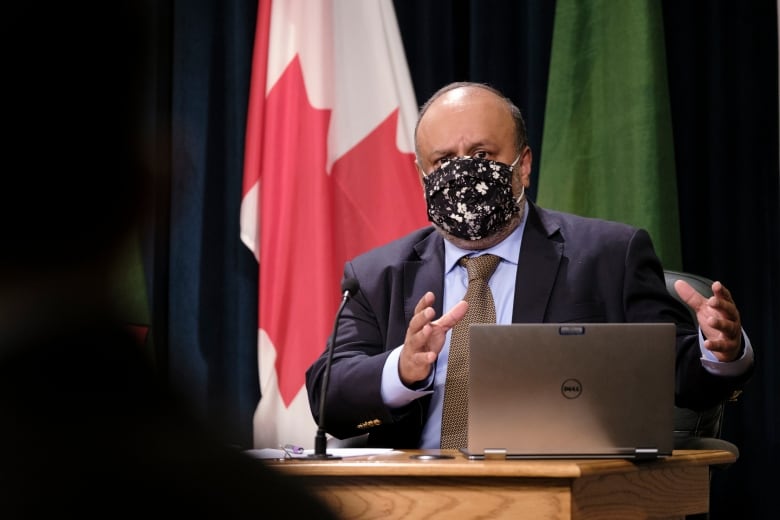 A judge has ruled the 13-year-old child of divorced Saskatoon parents should be vaccinated against COVID-19, despite legal opposition from the girl’s mother.

The father said his daughter was initially excited to receive her shot, but was then “bombarded” with false information by her mother and his own parents.

CBC News agreed to grant the father confidentiality in order to protect the identity of the daughter.

“[It felt like the] summer from hell,” the father said of his efforts to get his daughter protected against the virus that causes COVID-19.

He’s speaking out about the family rift and the judge’s decision in support of vaccination to offer comfort to other divorced parents who may be in a similar situation, he said.

“I can’t lose this case because it’s going to affect so many other people.”

The law firm representing the mother said she is appealing the decision and does not want the case publicized.

CBC News reached out multiple times to seek direct comment from her lawyer and did not hear back.

The father sought a court ruling that his daughter should get vaccinated in May, when she was 12.

In a Sept. 9 decision in Saskatoon’s Court of Queen’s Bench, Justice Michael Megaw ruled in favour of the father.

Megaw stated the mother expressed views challenging “the prevailing wisdom surrounding all of the health concerns arising from COVID-19,” including skepticism about the seriousness of the pandemic and a view that the Pfizer-BioNTech is experimental and dangerous.

“This case is not about whether there is, or has been, a pandemic with respect to the COVID-19 virus,” Megaw wrote. “The Pfizer COVID-19 vaccination is safe and effective for use in people, including both adults and children.”

Megaw’s decision arrived amid the fourth wave of the pandemic, which has brought an increase in the proportion of infections in Saskatchewan youth, including school students. Only children aged 12 and up are currently eligible to receive the vaccine.

The case may be one of the first of its kind in Saskatchewan involving COVID-19 vaccination, Megaw wrote.

While Megaw noted the mother said the daughter did not want to get vaccinated, “there is concern over how much [the daughter] has been influenced,” Megaw wrote.

“There is, moreover, concern over COVID-19 and the need to be vaccinated.”

“Yes, vaccines will be available next year, maybe, for children five to 11,” Shahab said earlier this month. “But if we go by current trends in parents of those children in various parts of Saskatchewan, [it] certainly does not give us great optimism for the uptake in children.”

The parents involved in the case divorced many years ago. Megaw reviewed submissions from both parents, including affidavits from doctors supporting either side.

Dr. William Code, an anesthesiologist and former tenured professor at the University of Saskatchewan’s College of Medicine, interviewed the daughter for an hour over video, according to Megaw’s decision. Dr. Code diagnosed her with a “possible” vaccine toxicity issue and gave her a vaccine exemption, Megaw wrote.

Megaw said he gave no weight to Dr. Code’s opinion because the possible diagnosis was “rather remarkably” based on the 13-year-old’s recollection of her own medical history, without any apparent input from the parents. The assertion of vaccine toxicity was “not clear from the material,” Megaw said.

“It can reasonably be concluded from the entirety of the material filed, and the submissions advanced, that the mother both opposes vaccination generally and questions the accuracy of the various COVID-19 information being disseminated by the health authorities,” he said.

Megaw said he drew that conclusion based on the mother’s brief, her “alliance” with the paternal grandparents, and a supporting affidavit from a B.C. doctor named Dr. Stephen Malthouse disputing the safety of the Pfizer vaccine.

Malthouse has been reprimanded by the College of Physicians and Surgeons of B.C. for spreading misinformation about COVID-19 vaccines. Megaw said he was not qualified to “opine” on the topic.

“The evidence before the court is that the paternal grandparents are opposed to vaccinations for COVID-19 and have been in contact with and, seemingly working with, the mother,” Megaw wrote.

According to Megaw’s decision, the mother alleged the father has been “punitive” to the daughter by enforcing COVID-19 protocols, including use of a sanitation station, online schooling and testing for COVID-19 if symptoms are shown, as well as limiting non-family members in the house and contact with unvaccinated people.

Such measures “were well known throughout society and I am unable to conclude any of the father’s measures were either unusual or overbearing,” Megaw wrote. The mother’s assertion that the measures are a form of psychological and emotional abuse is “rather difficult and overreaching,” he said.

While Megaw acknowledged the mother’s accusation that the father has been violent in the past — including reference to a late-2020 argument in which the father allegedly kicked the daughter — Megaw said that would be addressed in a separate court process about the family’s parenting plan and is “of no assistance” to deciding whether the daughter should be vaccinated.

“I 100-per-cent deny ever being violent,” the father told CBC News.

The father marshalled doctors of his own to help defend his position, including Dr. Alexander Wong, a Regina-based infectious disease physician who has been an outspoken advocate of COVID-19 vaccines and stronger public health measures from the Saskatchewan government.

Wong, who the judge called “eminently qualified” in the area of COVID-19, spoke to the daughter to answer her questions and reviewed the affidavits from Drs. Code and Malthouse, calling some statements from Malthouse “simply wrong,” according to Megaw’s decision.

Good news, everyone. Pfizer announced early this morning their vaccine was safe &amp; effective in kids b/w 5-12.<br><br>They’re expected to file for regulatory approvals by end of September. Jabs for kids should begin sometime in October.<a href=”https://twitter.com/hashtag/COVID19SK?src=hash&amp;ref_src=twsrc%5Etfw”>#COVID19SK</a><a href=”https://twitter.com/hashtag/COVID19AB?src=hash&amp;ref_src=twsrc%5Etfw”>#COVID19AB</a><a href=”https://t.co/F5ZVlYsDaI”>https://t.co/F5ZVlYsDaI</a>

The daughter’s pediatrician from birth said she should get vaccinated, noted Megaw.

“Counsel for the mother raised in argument that this physician had been bullied by the father into presenting the opinions which she did. I reject this submission outright. There is no such evidence before the court,” he wrote.

Megaw decided it’s in the best interest of the daughter to be protected against COVID-19 and that the father is entitled to arrange for the daughter’s vaccination — without the consent of the mother, but in consultation with the girl’s doctors.

“Those health-care professionals who have had direct involvement and treatment of this child … can continue to make the medical judgments they have been making in the best interests of this child,” he wrote.

The father said he approached his daughter’s doctors about the vaccination process last week, but that it had to be put on hold given the mother’s appeal of Megaw’s decision.

The whole process has been “unbearable,” he said, but the backing from other relatives and his employer has helped.

“They fully supported what I was doing in court; whatever time I needed, constantly checking in on me, asking me if I needed time off.”

The divorced parents have a second child, an 11-year-old boy who will be eligible for COVID-19 vaccination when he turns 12 or perhaps even sooner, depending on the progress made by Pfizer.

The father said he’s not worried about a repeat of his current legal quagmire.

“If it takes another court case, the second one should be very simple, because we have all the evidence already.”