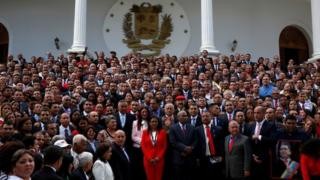 Venezuela’s controversial new constituent assembly has overwhelmingly voted in favour of assuming the powers of the opposition-led parliament.

Parliament has rejected the move. President Maduro says the new assembly will end political unrest, but many say it is a slide towards dictatorship.

Mrs Ortega said she feared for her life after being sacked by the new assembly.

Once a staunch supporter of President Maduro, she had become a strong critic of his socialist government in recent months.

Her whereabouts had been unknown following her dismissal on 5 August.

On Friday Mrs Ortega told a regional conference via videolink that she had evidence that Mr Maduro was embroiled in a corruption scandal involving the Brazilian construction company, Odebrecht.

Odebrecht has admitted paying bribes to win contracts in 12 countries, though no Venezuelans have been named.

The Venezuelan parliament said citizens and the international community would not recognise the constituent assembly’s new powers.

The head of the Organization of American States (OAS) Luis Almagro called the move an “illegitimate dissolution” of the elected parliament.

The heads of the parliament and the new assembly have been trading insults on social media.

Mr Maduro’s wife and son are among the 545 members of the new assembly, which was set up following a controversial election earlier this month.

More than 120 people have been killed in violent protests since April.

The president’s opponents want to hold a vote to remove him, blaming his left-wing administration for food shortages and soaring inflation in the oil-rich country.

What is the new body – and why is it so controversial?

Constituent assemblies are set up for the specific purpose of drafting or adopting a constitution, and as such can fundamentally change how a country is run.

Venezuela has seen waves of violent protests, and Mr Maduro presented the assembly as a way of promoting “reconciliation and peace”.

An ally of Mr Maduro, former foreign minister Delcy Rodriguez, is president of the new body

How widely is it supported?

The election for the constituent assembly was marred by violence and accusations of fraud.

Venezuela’s electoral authorities said more than eight million people, or 41.5% of the electorate, had voted, a figure the company that provided the voting system said was inflated.

The opposition boycotted the poll and also held an unofficial referendum in which they said more than seven million Venezuelans voted against the constituent assembly.

How does the international community see it?

The US has imposed sanctions on Mr Maduro, with the Trump administration calling him a “dictator”.

The European Union and major Latin American nations say they will not recognise the new body.

Mr Maduro retains a major ally in Russia, however, and has the support of several left-wing nations in the Americas.