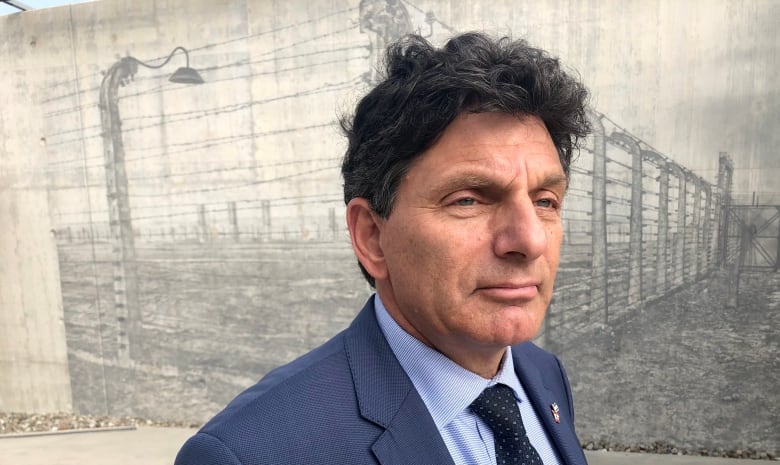 At the National Holocaust Monument in Ottawa on Tuesday, they gathered to remember the Babi Yar massacre.

Over two days in late September 1941, nearly 34,000 Jewish men, women and children were herded through the streets of Kyiv in Nazi-occupied Ukraine, stripped of their clothing and forced into a narrow ravine where they were mown down with machine guns. Dead and wounded alike were then buried where they lay.

At the solemn ceremony, which happened the same day provincial officials unveiled details of Ontario’s vaccine passport system, there was little sympathy for those who have been protesting against such passports and vaccine mandates — some comparing themselves to victims of Nazi brutality.

“It’s a total desecration of the memory of … those that were killed during the Holocaust,” said prominent Ottawa lawyer Lawrence Greenspon, who co-chaired Tuesday’s commemoration. “It’s incredibly insulting.”

The comparisons are “vile,” agreed Andrea Freedman, CEO of the Jewish Federation of Ottawa.

“They’re dangerous, and they’re a gross and wilful distortion of history,” she told CBC News.

It’s difficult to say whether the sentiment is widespread among the protesters, or representative of an extreme fringe. Protesters wearing yellow stars like those Jews were forced to wear in Nazi-occupied Europe have been seen at demonstrations across Canada.

At a demonstration in Calgary last week, one protester held a picture of Anne Frank, the teenage diarist who died in a Nazi concentration camp.

One internet meme making the rounds shows two forearms, one wearing a proof-of-vaccination bracelet at a baseball game, the other bearing a six-digit tattoo from a concentration camp.

“Those who fail to learn from history are doomed to repeat it,” the caption reads.

But CBC News spotted no sign of demonstrators comparing their cause to the plight of Jews during the Second World War when about 50 gathered on Monday near the Civic campus of The Ottawa Hospital.

Freedman rejects any such comparisons as not only wrong-headed, but potentially dangerous.

“There can be absolutely no comparison between torture and persecution, to getting a vaccine or wearing a mask, and quite frankly making such comparisons just trivializes the horrors of the [Holocaust],” she said.

For Freedman, that distortion is linked both to a general and growing ignorance about the Holocaust.

“It’s a lack of knowledge, it’s a lack of education and it’s a wilful ignorance of understanding the complexities of history,” she said.

That’s particularly true when it comes to hospital protesters comparing themselves to Frank, who’s believed to have died of typhus.

“The irony of this is that Anne Frank perished from a treatable disease,” Freedman said.

Increasingly, politicians are speaking out against such comparisons, too.

“Please think about the millions of Jews and others murdered and tortured and stop using this analogy,” he wrote on Twitter last week.

I find it unbelievable and appalling that so many anti mask and anti vaccine activists continue to compare public health guidelines to fight Covid 19 to the Holocaust and nazism. Please think about the millions of Jews and others murdered and tortured and stop using this analogy

“I really wish there was a way that we could stop it from happening, but I don’t think that the criminal law is at current equipped to be able to do that,” said Greenspon.

At the commemoration on Tuesday, several speakers alluded to a key lesson of the Holocaust: that such evil is only made possible when others look away. For that reason, Freedman says everyone has a duty to denounce such comparisons.