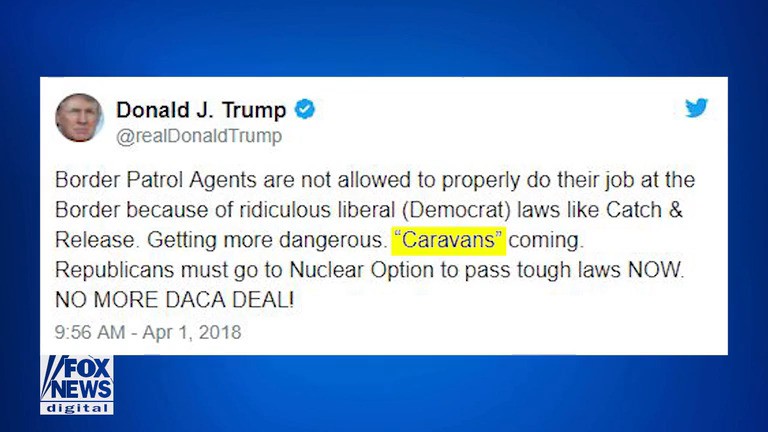 Homeland Security Secretary Kirstjen Nielsen on Monday warned the “caravan” of Central American migrants arriving at the southern U.S. border that they could face prosecution, detention and deportation, as President Trump called on the agency to block the group.

The announcement came as a group of about 50 migrants who left southern Mexico in March reportedly reached the U.S. border, planning to seek asylum.

“DHS continues to monitor the remnants of the ‘caravan’ of individuals headed to our Southern border with the apparent intention of entering the United States illegally,” Nielsen said in a statement. “A sovereign nation that cannot—or worse, chooses not—to defend its borders will soon cease to be a sovereign nation. The Trump administration is committed to enforcing our immigration laws – whether persons are part of this ‘caravan’ or not.” Nielsen outlined immigration law in her statement, warning those attempting to enter illegally.

“If members of the ‘caravan’ enter the country illegally, they will be referred for prosecution for illegal entry in accordance with existing law,” Nielsen said. “For those seeking asylum, all individuals may be detained while their claims are adjudicated efficiently and expeditiously, and those found not to have a claim will be promptly removed from the United States.”

DHS and the Justice Department have developed a “partnership” to “ensure that all cases and claims are adjudicated properly.” Nielsen said that included sending U.S. Citizenship and Immigration Services asylum officers, Immigration and Customs Enforcement attorneys, and Justice Department immigration judges and prosecutors to the U.S.-Mexico border.

“If you enter the United States illegally, let me be clear: you have broken the law. And we will enforce the law through prosecution of illegal border crossers,” Nielsen said.

Earlier Monday, Trump tweeted that he had “instructed” Nielsen not to allow “large caravans of people” into the U.S., calling the situation a “disgrace.”

“Despite the Democrat inspired laws on Sanctuary Cities and the Border being so bad and one sided, I have instructed the Secretary of Homeland Security not to let these large Caravans of people into our Country. It is a disgrace. We are the only Country in the World so naïve! WALL,” Trump tweeted early Monday.

The “caravan” left the Guatemala-Mexico border in late March and grew to more than 1,000 migrants. More migrants will reportedly be arriving at the U.S. border in the coming days. Last week, Mexico’s National Immigration Institute said its agents found hundreds of migrants packed into trucks in the Gulf Coast state of Veracruz, in the north-central state of Hidalgo, and in central Mexico.

The caravan peaked at around 1,500 people, but has mostly shrunk under pressure from Mexican migration authorities who vowed to separate the migrants with a right to stay in Mexico from those who did not, and Trump’s call for the National Guard to help secure the border.

“Mexico, whose laws on immigration are very tough, must stop people from going through Mexico and into the U.S. We may make this a condition of the new NAFTA Agreement. Our Country cannot accept what is happening! Also, we must get Wall funding fast,” Trump tweeted Monday.

“Let today’s message be clear: our nation has the most generous immigration system in the world, but this is a deliberate attempt to undermine our laws and overwhelm our system. There is no right to demand entry without justification. Smugglers and traffickers and those who lie or commit fraud will be prosecuted to the fullest extent of the law,” Attorney General Jeff Sessions responded.

“Promoting and enforcing the rule of law is essential to protecting a nation, its borders, and its citizens. But, as President Trump has warned, the need to fix these loopholes and weaknesses in our immigration system is critical and overdue.”

The Trump administration has been in negotiations with Mexico and Canada over the North American Free Trade Agreement (NAFTA) for months, efforting renegotiation for the agreement that the president has said has killed jobs in the U.S.

As for his central campaign promise to build a wall along the U.S.-Mexico border, Trump has received $1.6 billion as part of the omnibus spending package signed last month, for technology and some replacement of existing border fencing. But the wall, in total, is estimated to cost approximately $20-25 billion.

Nielsen on Monday also asked that congressional leadership “work with the administration to pass legislation to close legal loopholes that prevent us from securing our borders and protecting Americans.”