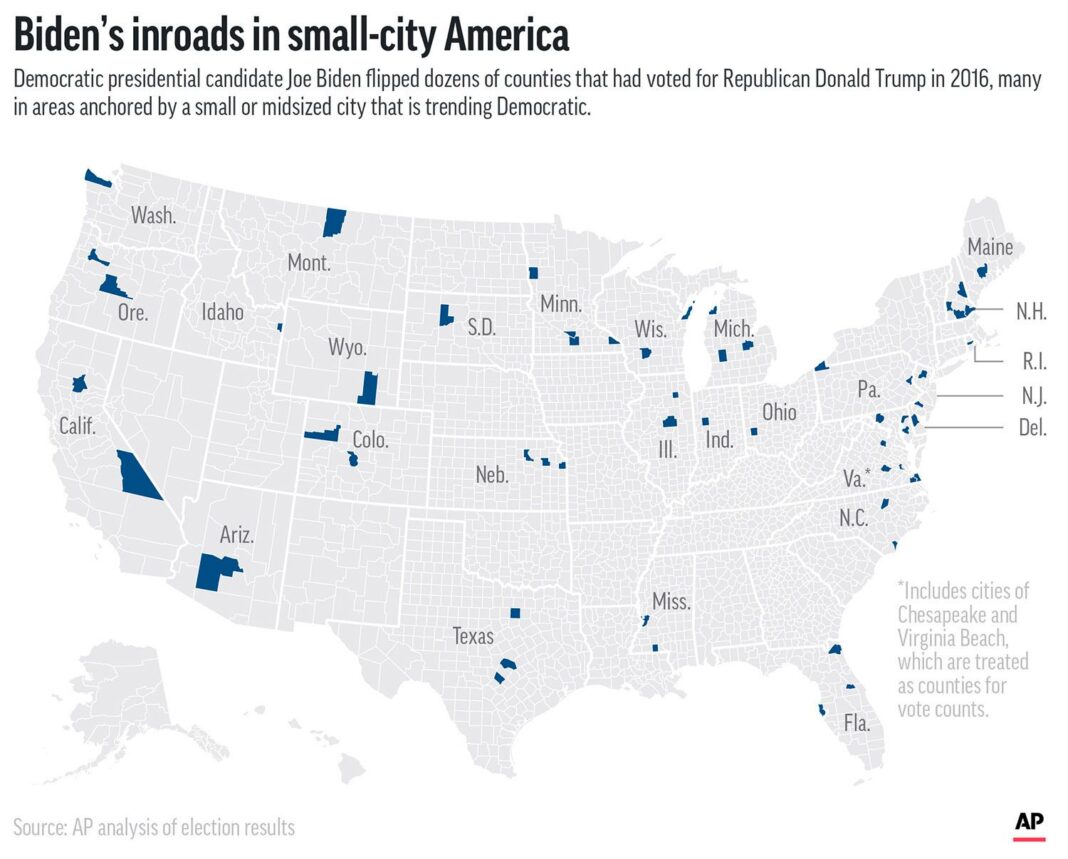 Biden , MANKATO, Minnesota (AP) — Mary McGaw grew up in a Republican home on the rural prairie of south-central Minnesota. But as she moved from her tiny town of Amboy to Mankato’s nearest city to study nursing, her politics migrated too.

McGaw was moved by the plight of the underinsured and became concerned about the viability of safety programs. She cast her vote for Democrat Joe Biden in November, and nearly three months later, she is pleased with how hard the new president is fighting for his priorities.

“He’s trying to get something done, even though there’s pushback from all sides,” said the 37-year-old registered nurse, who now works at a Mankato branch of the Mayo Clinic.

McGaw’s transformation drives Democrats’ hopes as they charge into what the party considers its new frontier: small-city America.

Their similarities are striking: Most include universities or, like Mankato, large medical centers that draw educated and racially diverse newcomers. Their economies are better than average. And in 2020, their voters showed a bipartisan streak — voting for Biden for president and Republicans down-ballot in large numbers.

“These voters are in line with Biden’s personal brand,” said Robert Griffin, research director for the Democracy Fund Voter Study Group, a bipartisan demographic and public opinion team. “He’s pegged as a moderate Democrat, rightly. But he’s also making sure there’s room for moderation in the party.”

“Sure, I wish it had contained the $15 minimum wage,” said Jim Hepworth, the area’s Democratic chairman. “But we can have that fight another day.”

Blue Earth County has long swung back and forth in presidential elections. But the demographic trends are steady in Democrats’ favor.

The Mayo Clinic’s expansion to Mankato from nearby Rochester in 1996 increased the supply of medical professionals from around the country and the world. Since 2010, health care jobs have increased in the county by roughly 70%. About 40% of Mankato residents have college degrees— a key indicator of Democratic voting — compared with 33% nationwide.

Racial diversity has accelerated — another boost for Democrats. Minnesota State University, Mankato, has drawn more international students to its expanded health care programs. And manufacturing and food-processing plants on the city’s outskirts have attracted immigrants from North Africa and Latin America.

The transition has not been without tension, but the area has come a long way since Abdi Sabrie, a Somali-American member of the Mankato School Board, arrived in 2009.

Then, his two daughters were the only students of North African descent in their elementary school. Today, 28% of Mankato’s enrollment are students of color.

The changes are welcome, but Sabrie gets frustrated.

“Sometimes I want Democrats to use their control to the max, regardless of the other side,” he said. “But this diversity shows me we can bring back the politics of collaboration.”

Signs of changes are easy to find.

A decade ago, hijabs were forbidden for Mayo employees. Today, the colored head coverings worn by some Muslim women are common on campus. The nation’s racial reckoning has played out in a debate over whether to rename Sibley Park, whose namesake is a general who ordered the hangings of 38 Dakota warriors in 1862, the largest mass execution in U.S. history.

From near that solemn spot along the Minnesota River, Mankato grew east to its wooded bluffs. Along the river, brick hulls of grain exchanges still stand, but now so does Karshe, an East African tea shop, and the arty Fillin’ Station coffee house, among used bookstores, spas, and brewpubs.

Midway up the slope, Mayo’s campus sits among the tidy, middle-class homes that made the difference for Biden. Biden netted 500 more votes in that precinct than Clinton did in 2016, a third of his winning margin in the county.

Fetching her children from school, McGaw says she and her husband, a Spanish-language medical interpreter, felt Biden was more task-oriented and less “about himself” than Trump. She voted straight-ticket but groused Peterson had become too conservative for the district.

McGaw said her family had lived modestly during the COVID-19 pandemic. They qualify for $2,800 in household aid and another $2,800 in child tax credits. McGaw sees others are needier.

“We’ve been doing OK,” she said. “I was never nervous about my job security. In fact, I was always asked to work more. Do we need the money? Honestly, we can do without it.”

McGaw isn’t necessarily typical. Nationally, 53% of Democrats say they have experienced at least one form of income loss during the pandemic, slightly more than the 43% of Republicans, according to a March poll by The Associated Press-NORC Center for Public Affairs Research.

A few blocks away, retired office administrator Jaci Lageson said she was pleased with Biden’s compromise with Senate moderates who wanted to lower the income threshold for those receiving the checks.

“It gets money in the pockets of people who need it to survive,” said Lageson, a 67-year-old former Republican who has voted Democratic over the past 20 years. Lageson’s 73-year-old husband, Larry, a devoted Trump supporter, called Biden a pawn of Democratic House Speaker Nancy Pelosi.

The number of counties Biden flipped in November is well short of the 206 Trump flipped from Barack Obama in 2016 — proof partisanship has hardened across the U.S. But the Democratic trend in these smaller, well-educated pockets looks sustainable, researcher Griffin said.

“It’s not surprising to have higher-education areas shifting back to the Democrats, given that educational polarization has increased,” he said.

The growth has turned this sleepy rural college island into a microcosm of Democratic America, mixed with pragmatic sensibility reflected in Elizabeth Van Slyke, “a progressive willing to compromise.”

“I’m not so dead set in my ways,” the 57-year-old marketing executive said. “Some progress in the right direction is better than no progress.”