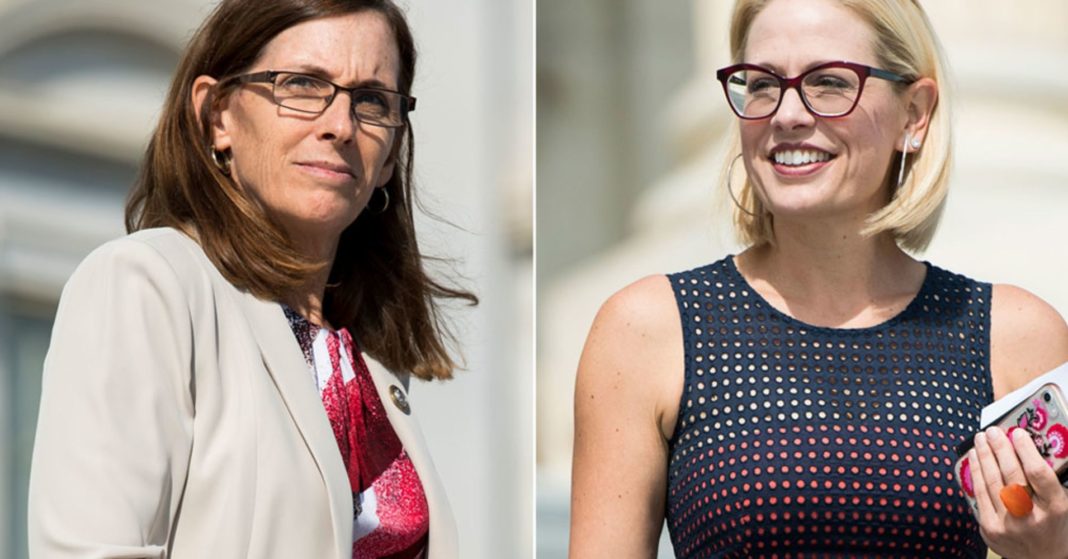 The pivotal Arizona Senate race, separated by a razor-thin margin, may get a jolt Friday from a Republican lawsuit that could limit the votes counted in the contest.

Democratic Rep. Kyrsten Sinema took a tiny lead Thursday over Republican Rep. Martha McSally in the Arizona contest, which NBC News considers too close to call. The Democrat holds an edge of only 0.5 percentage points, or about 9,000 votes, in a race that will help to determine how wide Republicans can make their Senate majority starting in January.

Republicans have challenged the process of counting mail-in ballots — which account for about three-fourths of Arizona’s votes — in the state’s two largest counties. The lawsuit, which a judge will hear Friday, targets the practice of Maricopa and Pima Counties allowing voters to fix issues with their ballots for up to five days after Election Day. The state has a tedious process of matching signatures on voters’ registration forms to those on their ballots, and the counties let voters fix signature problems for days after the election.

The litigation could potentially cap the number of votes counted in the race, in which every ballot will be critical due to the razor-thin margin. The result of the contest has huge stakes for what President Donald Trump and Senate Republicans can accomplish in the next Congress.

The GOP could hold anywhere between 52 and 54 seats in the chamber, depending on how the Arizona race and still unresolved Florida Senate contest go. Sinema’s bid for the office vacated by Republican Sen. Jeff Flake’s retirement gives Democrats their second best chance to win a GOP-held seat this year. Democratic Rep. Jacky Rosen is already projected to unseat Republican Sen. Dean Heller in Nevada.

McSally, a second-term representative who has gone through drawn out vote counts in her previous campaigns for Congress, made light of the process in a tweet Thursday morning. The 52-year-old’s campaign shared a picture of her sitting in a dentist’s chair.

“Woke up this morning dreading a long and painful process. I’ve been here before, and now, here I am again…the dentist’s chair,” she wrote.

On Wednesday morning — when returns still showed her trailing — Sinema expressed optimism about the race. The 42-year-old Democrat’s campaign tweeted that “there are a lot of outstanding ballots — especially those mailed-in — and a lot of reasons to feel good!”

Counting the remaining ballots could take well into next week. Drama is expected to persist in both Arizona and Florida, where the Senate race appears headed for a recount. Republican Florida Gov. Rick Scott has accused Democrats of trying to steal the election as he narrowly leads Democratic Sen. Bill Nelson. He has not mentioned specific allegations of wrongdoing.

In Arizona, the GOP lawsuit prompted criticism from at least one prominent Republican. Cindy McCain, widow of the state’s longtime Republican Sen. John McCain, tweeted at the Arizona GOP saying “I am one of those mail in ballots.”

“I was under the impression my vote was always counted,” she added.