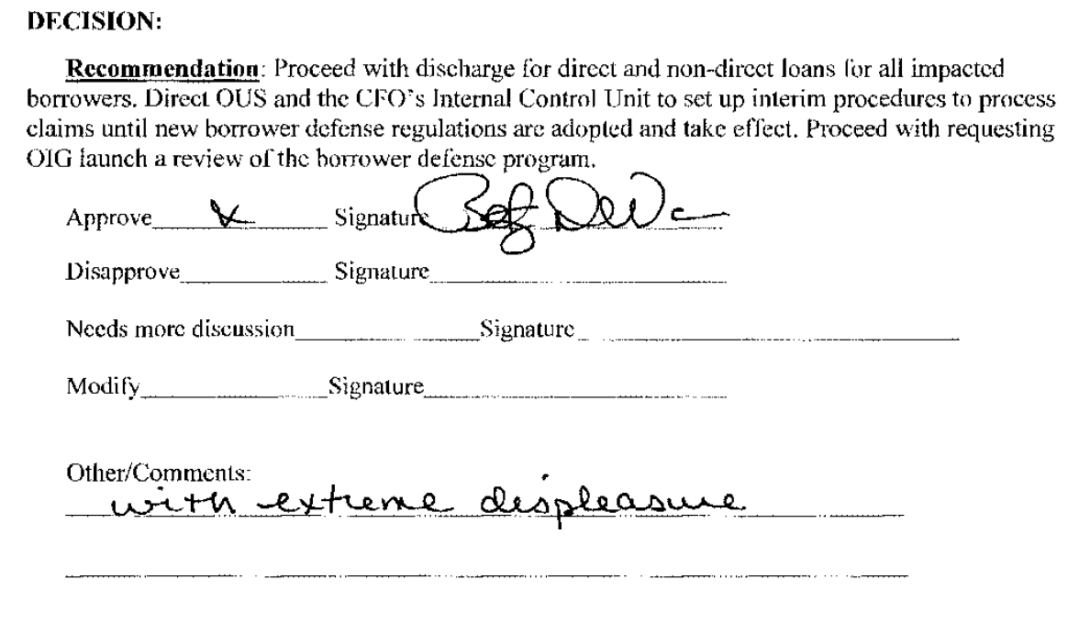 When Morgan Marler’s 5-year-old daughter, Lilian, asks her why she doesn’t work anymore, Marler doesn’t know what to say.

Marler attended ITT Technical Institute, a now-shuttered for-profit school, between 2013 and 2016. The school has since been found to have misled students with false advertisements. Marler, for her part, was told students typically went on to make $70,000 a year. After she graduated, the best jobs she could find were at call centers that paid $10 an hour — less than she’d been making before she enrolled at the school.

Her associates degree at ITT left her with $30,000 in student loans, and she’s asked the Department of Education to cancel her debt, but has yet to hear back. That was nearly three years ago.

A federal judge ruled last year that Education Secretary Betsy DeVos’ delays of an Obama-era regulation aimed at forgiving the student debt of defrauded students were illegal. Still, advocates say, the department continues to neglect the applications of those like Marler.

I went to school and it was all for nothing.

More than 180,000 claims for student debt forgiveness remain “pending” and no borrower has had their request approved or denied in more than a year.

“The Department of Education under Betsy DeVos is just ignoring the claims,” said Eileen Connor, the director of litigation at Harvard Law School’s Project on Predatory Student Lending, which is currently suing DeVos. “These people can’t plan for the future.

“They’re losing faith in the government.”

Nearly 900 former for-profit school students recently described the consequences of their education to the Project in written testimonies. Their stories make clear that a few years at a bad school can cast a shadow over the rest of someone’s life.

More than two-thirds of the defrauded student debtors said they struggled to get a mortgage or auto loan, half of them said the uncertainty around whether or not their debt will be cancelled has caused them to delay marriage or children, and nearly all of them said their lives are worse off today than before they went to school.

Since 2015, more than 200,000 people have asked the Department of Education to cancel their student loans because they attended a fraudulent school.

In response to the rush of complaints, the Obama administration in 2016 announced a process by which the government could forgive the loans it gave to these students. That rule was set to take effect July 2017.

Then Donald Trump became president. His Education Secretary, Betsy DeVos, repeatedly delayed the regulation. A 2017 audit by the Department of Education’s Office of Inspector General found that government staff working on the claims had been instructed not to submit any additional ones for approval.

Speaking at a conference, DeVos said under the current rule, “all one had to do was raise his or her hands to be entitled to so-called free money.” When DeVos inherited some student loans which had already been deemed forgivable under the Obama administration, she was forced to approve their cancellation. However, on the forms, she made clear she was doing so only “with extreme displeasure.” 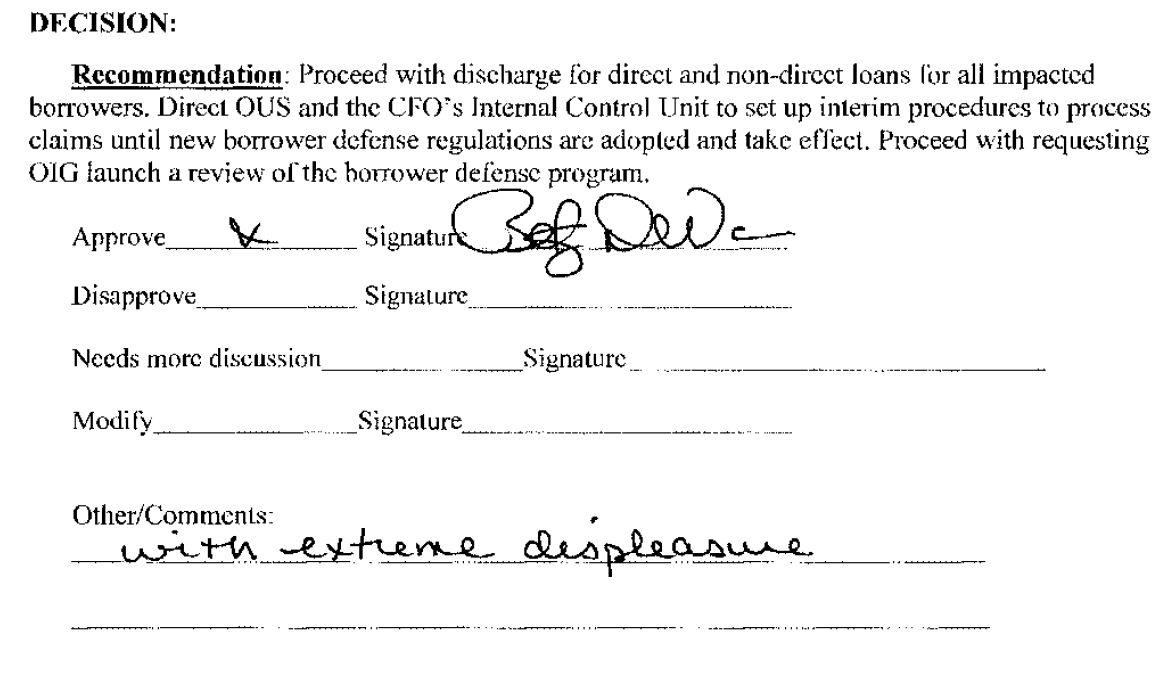 Liz Hill, a spokeswoman for the Education Department, said the agency stands ready to process these claims.

“The only thing stopping the Department from finalizing thousands of these claims is the constant stream of litigation brought by ideological, so-called student advocate special interests,” Hill said.

In the meantime, Marler stays at home taking care of her daughter (her husband is in the Army). She says she can’t find a job that would even cover the costs of childcare.

“I really thought I’d have an education that led to a career and a purpose in my life,” Marler said. “But here I am, just waiting for this debt to go away.”