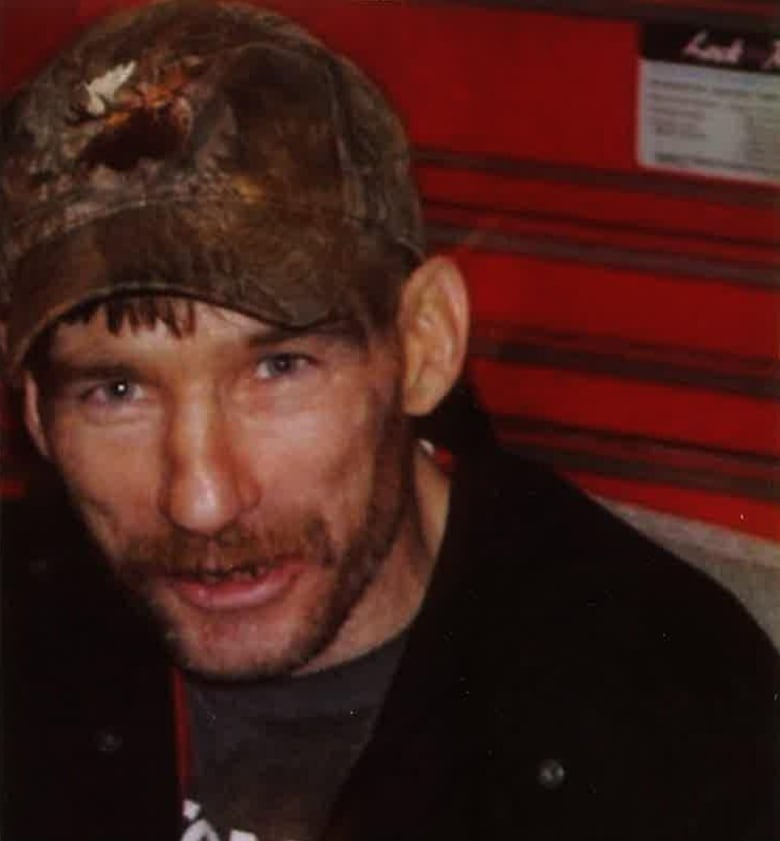 Jeffrey Ryan’s obituary says he was an avid outdoorsman who loved to hunt and fish. (Submitted byh Ryan family)

Correctional officers inside the Saint John Regional Correctional Centre did not check on a sick inmate in person for more than six hours, violating correctional policy by monitoring him through a video screen.

By the time someone entered 37-year-old Jeffrey Ryan’s cell on the morning of March 8, 2011, he “was cold to the touch and rigor mortis had ‘obviously’ set in.”

That’s according to new details from a previously secret Department of Public Safety report detailing its investigation into Ryan’s jail death. The report was originally withheld by the department but was released to CBC News after a ruling from the Office of the Integrity Commissioner.

For ombud Charles Murray, Ryan’s case “is an example of a pretty significant failure” in the system.

“He wasn’t just an inmate, an incarcerated person. He was also a person in our care,” Murray, who is also the interim integrity commissioner, said in an interview.

“He was dependent upon us for all the essentials of life and we failed in our primary duty to keep him healthy and safe.”

The Pocologan man was arrested on March 5, 2011, for allegedly failing to comply with conditions of an undertaking. That’s when Ryan lost access to his addictive opioids, which were prescribed to treat chronic pain from a gunshot wound to the stomach.

A June 2018 report from New Brunswick Auditor General Kim MacPherson found that inmates’ treatment is often disrupted when they enter or leave the provincial jail system, which can include losing access to prescribed medication. Ryan was 37 years old when he died inside the Saint John Regional Correctional Centre in 2011. (Submitted)

In the days that followed before his death, records show Ryan became increasingly ill, as he was forced to go through opioid withdrawal cold turkey. At one point, he became lightheaded and fell over in a hallway, triggering a medical code.

But Ryan was never taken to a hospital.

He was scheduled to appear in provincial court on March 8, 2011, the same day he was found dead on the floor of his cell.

Discipline was recommended against at least one correctional officer following Ryan’s death, but the report doesn’t say whether anyone was actually disciplined.

She believes her father might still be alive had he been taken to hospital during his time in jail.

“These are humans. Just because they’re in prison doesn’t mean they’re trash.”

Ryan “appeared to be ill upon admission,” according to the investigation report, and spent his first night in jail on a couch because of the frequency of his vomiting.

On the day before his death, nursing staff noted that Ryan was having tremors and shaking, even spilling his can of Ensure over a medical cart.

The report says he was treated by a nurse practitioner, given an over-the-counter medication such as Gravol, and placed alone in a medical cell, where he slept on a mattress on the floor. 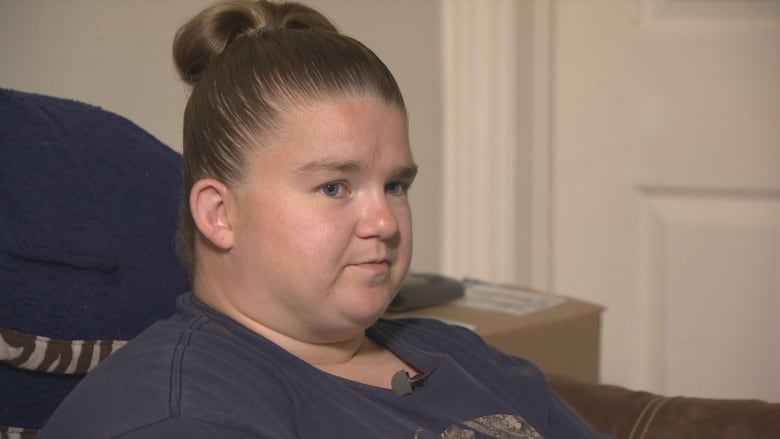 Rebeckah Flint says she cries for her son, who won’t get a chance to meet his grandfather, Jeffrey Ryan. Ryan died in 2011 inside the Saint John Regional Correctional Centre. (Brian Chisholm/CBC)

The report, written by Sheldon Currie, who was then manager of provincial institutional operations, says Ryan was placed in the medical cell for “heightened observation.”

On the night before his death, correctional officers were supposed to complete “eye checks” on Ryan every 15 minutes, meaning they had to verify his condition with their own eyes.

At 11:10 p.m., a correctional officer went into Ryan’s cell to replace his bedding after he vomited. The unnamed officer assisted Ryan to his bunk and covered him with a new sheet.

That was the last time anyone entered Ryan’s cell until 5:45 a.m. the next day.

Physical rounds not completed after 11 p.m.

“The investigation has established there is consistent collaborative information that physical rounds after (11 p.m.) on March 7, 2011, were not completed as there was a ‘practice’ employed on this shift where the observation of inmates in medical services and segregation were completed by watching video monitors and logging of these observations by the central control officer,” the report says.

That practice violates a policy on supervision of inmates who require “special observation,” though Currie found “no purposeful neglect” was apparent. 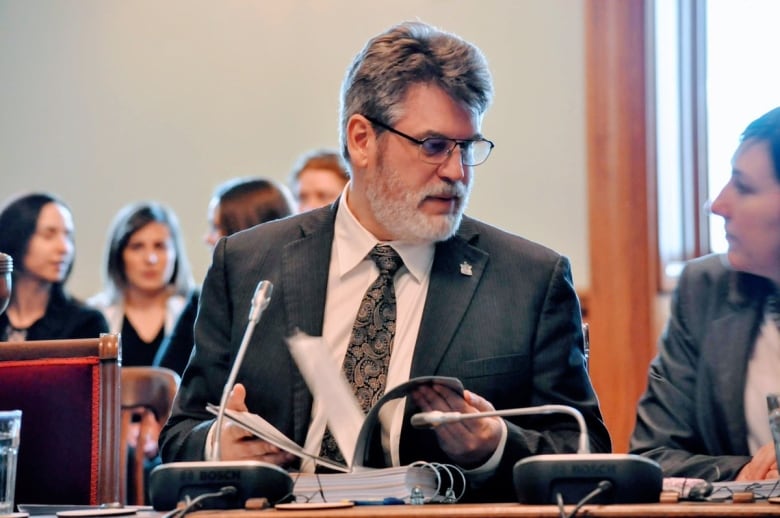 Provincial ombud Charles Murray says Ryan’s case is ‘an example of a pretty significant failure’ in the system. (Nicolas Steinbach/Radio-Canada)

No one noticed anything was wrong until approximately 5:43 a.m., the report shows.

A new correctional officer took over the video monitoring post at 5 a.m. That person noticed that Ryan had been “sleeping on his stomach facing the wall” and hadn’t moved since they arrived at their post.

Even then, an emergency response was “not immediate,” according to the report.

“Video evidence leaves the viewer with the impression CO [name redacted] appeared hesitant to actually confirm signs of life, i.e., pulse, respirations, body temperature upon entering the cell, seconds passed before [redacted] was able to compose himself and could eventually be seen touching Mr. Ryan, [albeit] very briefly initially.”

Another correctional officer arrived and they “appear to stand by awaiting instruction.”

It wasn’t until a third correctional officer arrived and “took control” that someone took Ryan’s pulse and discovered rigor mortis had already set in. CPR was never performed.

“At the point at which an actual physical check was made, he had been deceased for some time,” Murray said.

“A more rigorous schedule of proper physical checks would have revealed that much earlier, even perhaps in time for an intervention, a medical intervention which might have saved his life. We’ll never know, of course.”

Currie recommended “corrective actions” be considered against an unnamed correctional officer “for the wilful authorization of ‘practices’ that contravene standard policy and procedures.”

He also recommended “formal constructive direction” be given to two unnamed correctional officers “on the importance of readiness within a correctional environment and the offering of immediate assistance upon the discovery of someone in medical distress.”

No one from the Department of Public Safety was made available for an interview about Ryan’s death. 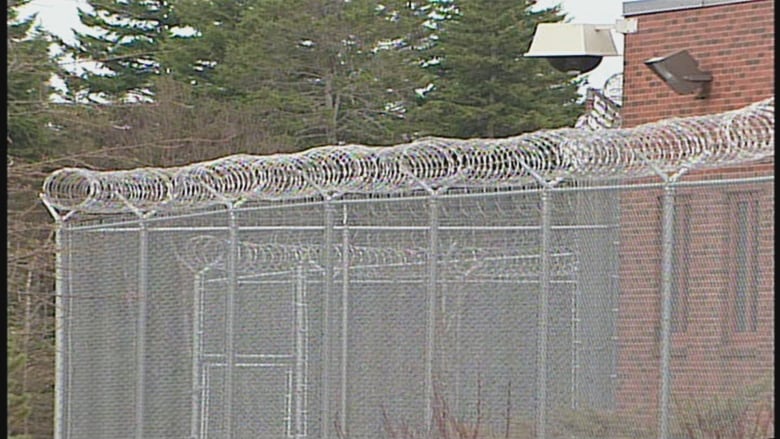 An investigation report recommended discipline against at least one staff member at the Saint John Regional Correctional Centre in Saint John after Ryan’s death, but it’s not clear whether anyone was actually disciplined. (CBC)

In an emailed statement, spokesperson Shawn Berry said “all of the recommendations that required action by the Department of Public Safety were addressed” in the Ryan case, but he didn’t provide details.

Ryan’s death was investigated by Saint John police and the coroner, who determined he died from “natural causes,” Berry wrote. The full coroner’s report has never been made public.

An ongoing CBC News investigation has found that inmates routinely complain of being denied their prescription medication, even when the medication has been prescribed to treat serious mental health issues.

That was echoed in last year’s report from the auditor general, which described a patchwork system of care that often sees inmates leaving jail sicker than when they came in. MacPherson compared some of what she found in New Brunswick’s jail system to “stuff you would see in a developing country.”

The government also declined an interview about its progress in implementing MacPherson’s recommended changes, saying only that government “continues to work on addressing and implementing the recommendations.” 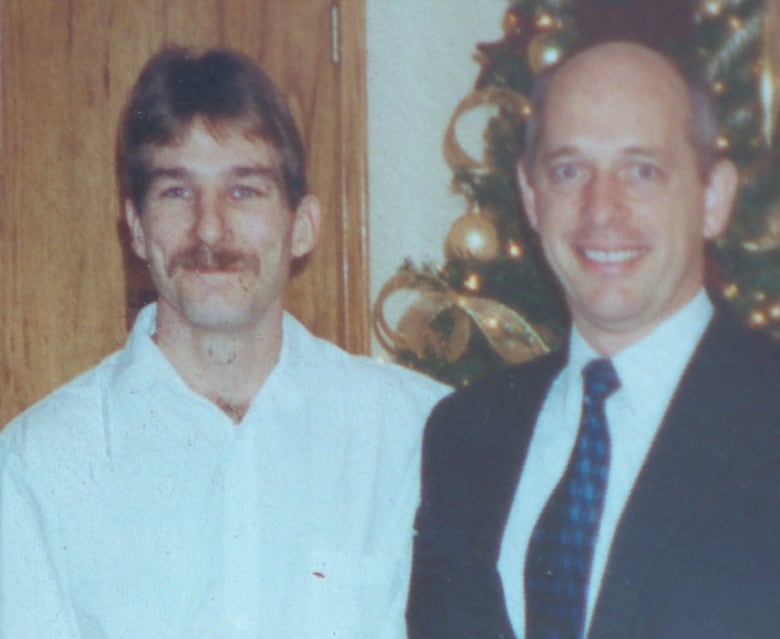 Ryan, pictured here on the left, became increasingly ill before his death at the jail in 2011, records show. (CBC)

Ryan’s death represents the failure of the “guard mentality” inside New Brunswick’s jails, according to Murray.

He’s been advocating correctional officers take more of a “caretaker mentality” with inmates, something he said requires a culture change.

“It takes time and there’s always resistance from the former culture,” Murray said.

“So I think we should give credit for the improvement that has been made but also recognize we still have a long way to go.”

He pointed to the recent hiring of a patient advocate for inmates as a sign of that change.

The person’s goal is to focus on inmates’ health and to make sure sick prisoners are treated as patients, Murray said.

Eight years after her father’s death, Flint still has questions about why no one took him to a hospital.

She’s determined to get the government to release a video that shows Ryan’s final hours inside that medical cell. CBC News was refused access to the video.

“He went to jail because he was driving without a license and he died in there,” Flint said. “That’s insane.”

For Flint, it’s about getting justice for her son, who will never meet his grandfather.

She’s also doing it for her late grandfather, Nelson Ryan, who died in February 2017 without getting answers about what happened to his son. 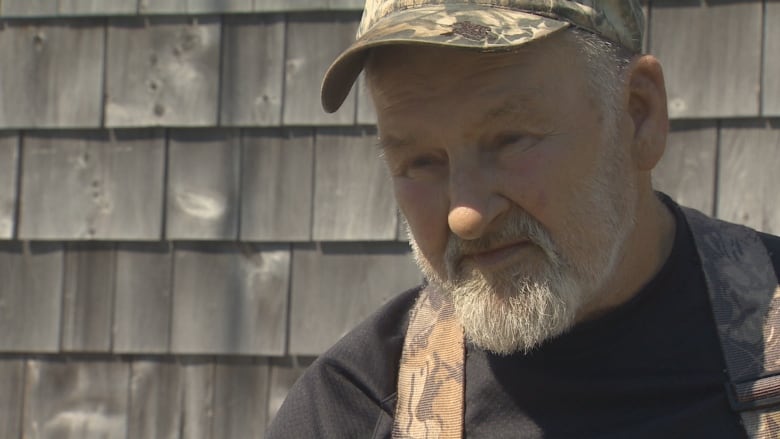 Nelson Ryan died in 2017 without getting the answers he wanted about his son’s death. (CBC)

The two were best friends and for years after the death of his son, Flint said, her grandfather would lie in bed and call out for him.

“To get some sort of justice would, for me, be amazing because that was his [Nelson Ryan’s] dying wish,” Flint said.

In 2016, Nelson Ryan told CBC News he wanted to hire a lawyer to get answers about his son’s death.

But he couldn’t afford the fees.

“I think he’d be very proud and if my dad was still here, he’d be telling me, ‘Go forward with it, keep pushing,'” Flint said.

Ryan’s obituary described him as a “hands-on type of guy who worked as a clam harvester.” He was also an avid outdoorsman, who loved fishing and hunting.

Do you have a tip about the New Brunswick correctional system? Please click here to get in touch.