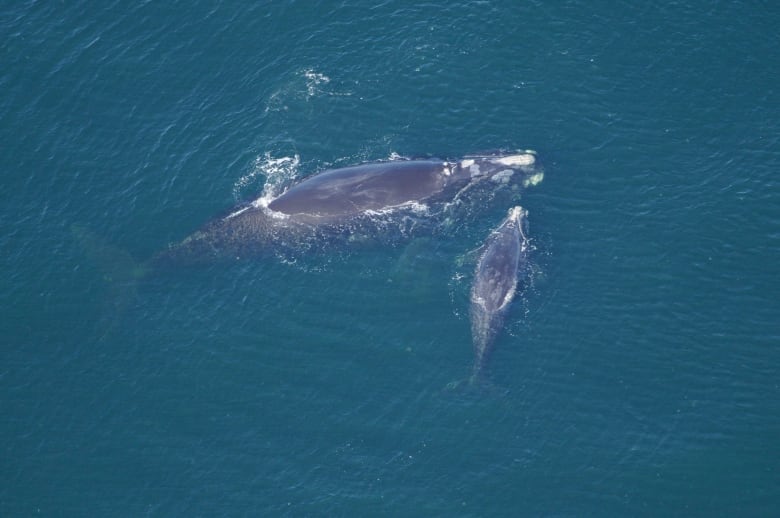 Punctuation the right whale, seen from the rear, was towed to Cape Breton for examination on Tuesday. (Gary Mansfield/CBC)

The second critically endangered North Atlantic right whale to be found dead in Canadian waters this year has been towed to Cape Breton for examination.

A team of 25 to 30, including biologists, veterinary pathologists and veterinary technicians, ​​​​​hopes Tuesday’s necropsy will help shed light on how the large female died.

“They’re basically going to dissect the whale from one end to the other and do a really close examination of every bit that they can,” said Isabelle Elliott, the marine mammal response co-ordinator for the Department of Fisheries and Oceans in the Gulf region.

“This whale is definitely a big one. She’s probably one of the bigger ones that we have, unfortunately, had the privilege to do a necropsy on in the last couple of years.”

The team will first peel off the blubber and measure its depth to see if the whale was emaciated. Then, scientists will examine the muscle tissue and bones for signs of trauma. Finally, they’ll look at the organs and take samples for toxicology tests before the carcass is disposed of in a nearby quarry. 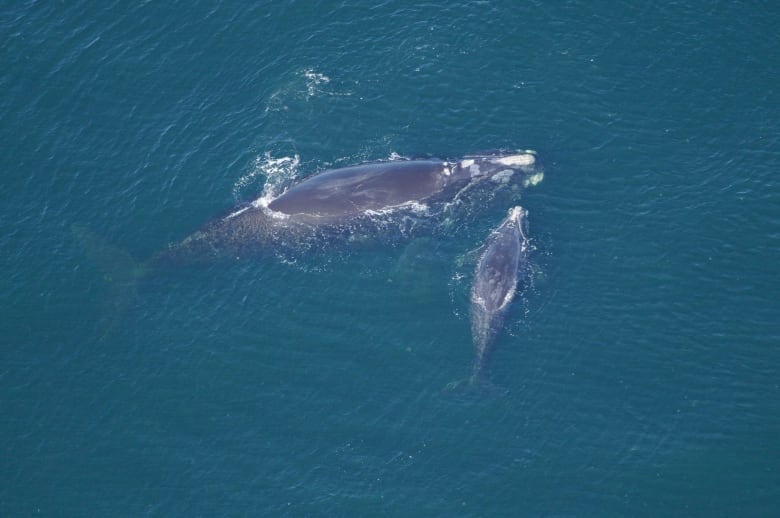 Punctuation is seen with her calf swimming off the coast of Georgia in 2006. (New England Aquarium taken under NMFS/NOAA permit #655-1652-01)

The whale, which was first spotted dead in the Gulf of St. Lawrence on Thursday, has been identified as Punctuation, so named due to the scars on her head that look like dashes and commas. According to the New England Aquarium, which tracks the whales, she was first identified in 1981.

In the four decades scientists have observed her, she has had eight calves. Two of them went on to have calves of their own.

In her life, she had been entangled in fishing nets five times and struck by ships twice.

Stephanie Ratelle, a biologist with DFO, said the whale’s long history with researchers makes it tougher to disassociate personal feelings.

“You get attached, especially because they’re so endangered. I could see the extinction of a population or a species in my lifetime so that’s not a good feeling.” 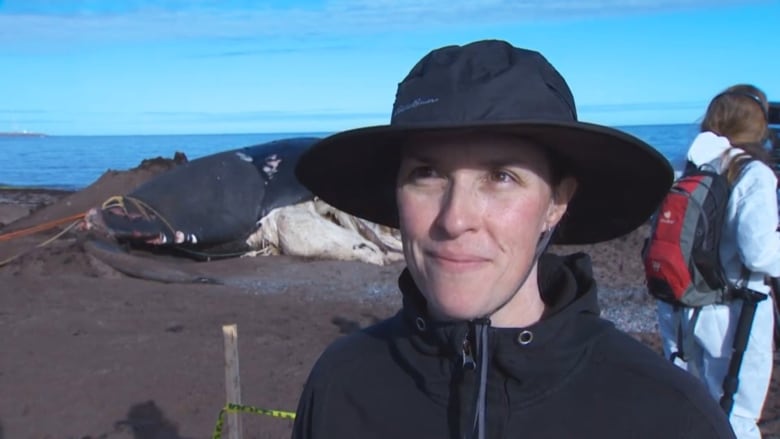 Isabelle Elliott, marine mammal response co-ordinator for DFO in the Gulf region, was one of a team of scientists dissecting the carcass of Punctuation the right whale in Cape Breton. (Gary Mansfield/CBC)

It could be months before the results of the necropsy are compiled, according to DFO.

Tonya Wimmer, executive director of the Marine Animal Response Society in Halifax, has said the whale was one of the more “reproductively successful females,” and called her loss “heartbreaking.”

Another right whale, a nine-year-old male named Wolverine, was found dead in the Gulf of St. Lawrence earlier this month. Preliminary necropsy results into his death were inconclusive. The full results won’t be known for months. 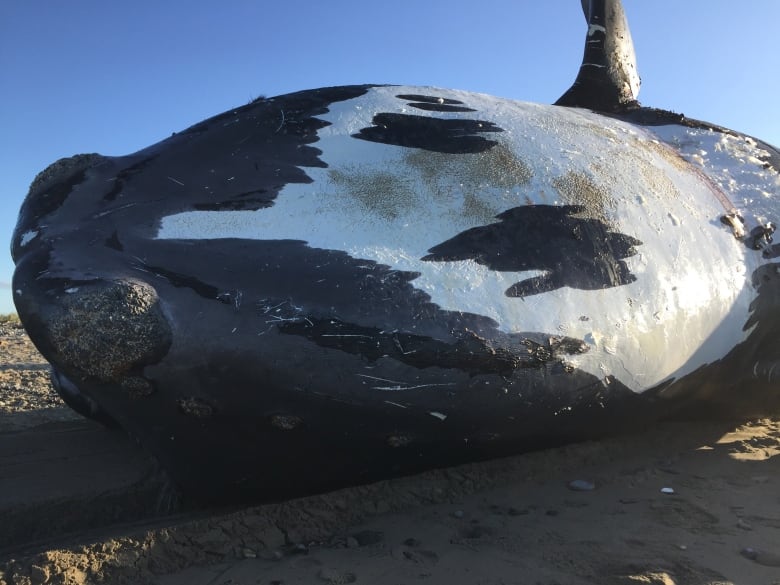 No right whales were recorded dying in Canadian waters last year, but 12 were found dead in the Gulf of St. Lawrence in 2017.

Necropsies on seven of them found four died from trauma consistent with vessel collisions, while two deaths were the result of entanglement in fishing gear.

There are an estimated 416 North Atlantic right whales left in the world.

Multiple agencies, including DFO, the U.S.-based National Oceanic Atmospheric Administration (NOAA), Transport Canada and others, are working together to track the remaining whales. On any given day, several aircraft fly over the waters of Atlantic Canada in search of right whales.