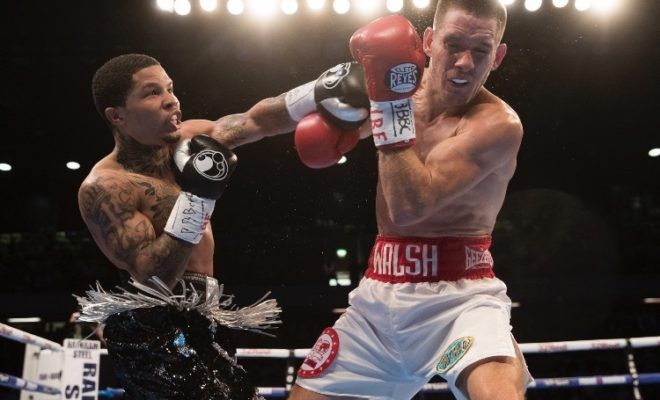 Note: Results through May 22. In an effort to provide the most up-to-date rankings, ESPN.com’s division-by-division boxing rankings will be updated every Tuesday.

JUNIOR LIGHTWEIGHT DIVISION (UP TO 130 POUNDS)

Lomachenko, the brilliant two-time Olympic gold medalist from Ukraine, dismissed Gary Russell Jr. to win a vacant featherweight title in his third pro fight in 2014, tying the record for winning a world title in the fewest number of bouts. After three dominant defenses, Lomachenko moved up to junior lightweight and decimated Roman “Rocky” Martinez in a fifth-round knockout to win another title in June, as he set the record for fewest fights needed (7) to win titles in two weight classes. On Nov. 26, Lomachenko, perhaps the best fighter in the world pound-for-pound, made his first defense and dominated and befuddled former featherweight titlist Nicholas Walters. Lomachenko was so utterly dominant that Walters simply quit after the seventh round. Lomachenko returned to HBO on April 8 and laid waste to former titlist Jason Sosa in nine massively one-sided rounds.
Next: TBA

2. Jezreel Corrales (21-1)
In a huge upset, then-interim titlist Corrales, a southpaw from Panama, traveled to Tokyo and scored three knockdowns against long-reigning titleholder Takashi Uchiyama in the second round to win the full title in April 2016. In the December rematch, also in Tokyo, Corrales came away with a split decision victory. He now plans to fight in the United States after signing with Golden Boy Promotions and will defend against Robinson Castellanos (24-12) on HBO.
Next: July 15 vs. Castellanos

3. Miguel Berchelt (31-1)
Mexico’s Berchelt dominated Francisco Vargas to win a world title on Jan. 28 in an HBO main event. Berchelt went past the sixth round for the first time as he badly busted up warrior Francisco Vargas en route to an 11th-round knockout victory. Next up will be a mandatory defense on HBO against and former titlist Takashi Miura (31-3-2), of Japan, who earned the shot with a win on the Jan. 28 undercard.
Next: July 15 vs. Miura

4. Takashi Miura (31-3-2)
Miura, a Japanese southpaw, looked on his way to a successful fifth title defense when he faced Mexico’s Francisco Vargas on the Miguel Cotto-Canelo Alvarez HBO PPV undercard in November 2015. He survived a rough first round to drop Vargas in the fifth round and had him all but done by the end of the eighth — until Vargas caught him early in the ninth and stopped him for the comeback victory in a sensational fight that was the 2015 ESPN.com fight of the year. After an easy first-round knockout win over a novice opponent in Japan in May 2016, he returned Jan. 28 on HBO and knocked out Mexico’s Miguel Roman in the 11th round of an absolutely grueling action fight to become the mandatory challenger for main event winner Miguel Berchelt (31-1).
Next: July 15 vs. Berchelt

5. Gervonta Davis (18-0)
Davis, a dynamic fighter from Baltimore and a Floyd Mayweather protégé, was very impressive on Jan. 14 when he stepped up in competition and stopped Jose Pedraza in the seventh round of an excellent fight to win a world title. He was equally as impressive in his first defense on May 20, when he was in England, with Mayweather at ringside, and destroyed mandatory challenger Liam Walsh in a third-round knockout victory. This kid could be around doing damage for the foreseeable future.
Next: TBA

6. Orlando Salido (43-13-4)
Mexico’s Salido, a former featherweight and junior lightweight titleholder, has been in numerous fight of the year candidates and become a fan favorite for good reason. In his latest incredible action fight, Salido battled to a draw challenging titleholder Francisco Vargas in June in the 2016 ESPN.com fight of the year. He will be back in action in his home region when he takes on Thailand’s Amphon Suriyo (18-2) at 132 pounds, hoping it will lead to a rematch with titleholder Vasyl Lomachenko later this year.
Next: May 27 vs. Suriyo

7. Takashi Uchiyama (24-2-1)
Things did not go well as Japan’s Uchiyama on April 27, when he was trying to retain his belt for the 12th time. Jezreel Corrales, the interim titlist from Panama, traveled to Tokyo and blew him away with three knockdowns in a shocking second-round knockout. In the New Year’s Eve rematch, also in Tokyo, Uchiyama performed better but lost by split decision.
Next: TBA

8. Francisco Vargas (23-1-2)
Vargas — the Mexican Arturo Gatti — won the 2015 fight of the year in an epic comeback knockout of Japan’s Takashi Miura to win a world title and drew with former titlist Orlando Salido in the 2016 fight of the year in his first defense. But both fights were absolutely brutal and Vargas took tremendous punishment. He suffered bad cuts in both fights which came back to haunt him in his second defense on Jan. 28, when he faced countryman Miguel Berchelt in an HBO main event. It was, of course, another action-packed fight, but Berchelt took over in the later rounds after opening terrible cuts around both of Vargas’ eyes. His skin just cannot hold up under the assault and Berchelt won by 11th-round knockout. Vargas is likely going to be out of action for quite awhile.
Next: TBA

9. Roman “Rocky” Martinez (29-3-3)
Puerto Rico’s Martinez, who twice had won 130-pound titles, got another shot at a belt and made the most of it when he challenged Mexico’s Orlando Salido in April 2015 in Puerto Rico. They turned in an explosive and exciting fight, but Martinez took care of business, dropping Salido twice and winning a competitive decision. They met in a rematch in September and put on another very good fight as Martinez retained the belt in a draw that most had Salido winning. A deal for a third fight went down the tubes so Martinez instead faced featherweight titlist Vasyl Lomachenko, who moved up in weight and knocked Martinez out in spectacular fashion in the fifth round on June 11.

10. Jason Sosa (20-2-4)
Although Sosa was awarded a draw against former featherweight titlist Nicholas Walters in December 2015, virtually everybody had Sosa losing a one-sided fight. However, he got the draw, and that set him up for a shot at secondary titleholder Javier Fortuna on June 24 in Beijing. Sosa, trailing on all three scorecards, rallied for a big upset as he drilled Fortuna in the 11th round. Sosa made his first defense on Nov. 12, traveling to Monte Carlo and outpointing England’s Stephen Smith in a fantastic slugfest. Sosa then gave up his belt to facilitate a fight nobody else seemed to want against outstanding titleholder Vasyl Lomachenko on April 8. However, Sosa, as most predicted, was completely outclassed in a ninth-round knockout loss.
Next: TBA