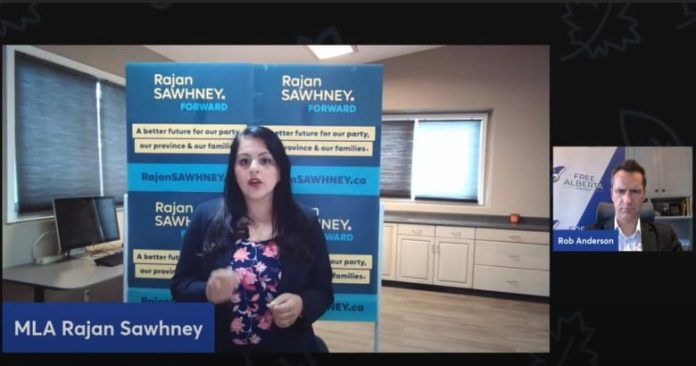 In an anxious fantasy sequence in an episode of The Simpsons, young Lisa Simpson imagines playing saxophone at a rock concert as the audience pelts her band with jeers. She snaps out of the daydream, asking: “Why would they come to our concert just to boo us?”

This scene came to mind while watching the first forum in Alberta’s still-young United Conservative Party leadership race. It was hosted by the Free Alberta Strategy, a fervently anti-Ottawa group, and moderated by Rob Anderson, a lawyer and former MLA.

Anderson and his group tout the Alberta Sovereignty Act, a plan for Alberta to systematically refuse to uphold or enforce any federal policy or act it believes impedes the province’s interests, jurisdictionally or otherwise.

The fact that seven of eight top UCP leadership candidates were joining this group’s policy forum suggested that maybe they were keen to embrace this sovereignty idea, which Anderson himself predicts would run afoul of the Supreme Court of Canada and trigger a constitutional crisis.

“I don’t think it’s a bad thing,” Anderson said in an interview, referring to constitutional crises. “Lots of good things can come from crises.”

Most leadership candidates, however, came to the forum to boo his idea. Rajan Sawhney said if the idea’s own authors see it as overtly political and unconstitutional, “it sounds like virtue signalling and a distraction.” Then Rebecca Schultz: “We can’t just not follow laws that we don’t like.”

Brian Jean, though he has “autonomy” in his campaign slogan: “If you don’t have the rule of law, then you head toward tyranny” (a point University of Calgary law professors also raised this week). Travis Toews said “creating chaos” would set back Alberta’s economic growth, and on it went.

But Danielle Smith had come to cheer. The former Wildrose Party leader (who, alongside Anderson in 2014, crossed the floor to Jim Prentice’s Tories) is not only a fan of this Sovereignty Act — she’s already declared it her day-one priority. Smith believes Alberta could use this tool to shield Alberta from everything from the Emergencies Act to vaccine rules to internet content regulation.

“It’s our job to make sure that we’re taking care of business and taking care of our people,” she told the forum. She added, in apparent reference to the legal quagmire the bill is designed to provoke, “I’m kind of somebody who believes in asking for forgiveness rather than permission.”

The only other candidate to show warmth to this crisis-friendly legislative initiative was a much less prominent one: Todd Loewen, a rural MLA exiled from the UCP caucus. In other words, the rest of the UCP field is not only ceding this explosive idea to Smith; they’re terming it as detrimental to the province.

There are two recent paths that such provocative ideas have taken in political contests. There’s Kellie Leitch’s pitch in the 2017 federal Conservative contest to screen immigrants with a values test — which her rivals quickly distanced themselves from. Leitch finished a distant fifth.

Then there’s Donald Trump’s proposal to build a border wall and somehow make Mexico pay for it — which his Republican primary rivals quickly distanced themselves from. He won the White House.

With barely three months to go before a new UCP leader and premier is crowned, it’s not completely clear which trajectory Smith’s bold idea will take her on. Though it’s clear she’s separated herself from the pack, and that there has been an appetite from Alberta’s conservative activists for action that’s much more aggressive toward Ottawa than Jason Kenney’s federal-provincial pugilism.

Meanwhile, the other tactical example that Smith’s camp is doubtlessly mindful of is Pierre Poilievre’s, in the current federal leadership race. His unconventional plans that channel angry moods and defy established institutions, like his trashing of the Bank of Canada leadership, have him apparently dominating the race.

Smith has also readily embraced other Free Alberta strategies, ones that also came up in the notorious 2001 Alberta firewall letter: creating the province’s own police force and pension plan, as well as separately collecting provincial income tax. For nearly two decades, conservative premiers from Ralph Klein onwards shrugged off such ideas, until Kenney struck his Fair Deal Panel to consider them.

Kenney’s panel discouraged the tax collection proposal, and so did most UCP leadership candidates at the forum, because it creates costly bureaucracy and duplication for individual tax filers. The police and pension ideas got warmer receptions from many of these would-be premiers, but it was generally bracketed with caution, and calls for more consultation before proceeding, as polls have consistently shown Albertans’ wariness of these major changes.

Travis Toews’ endorsements from much of caucus, and his high profile as Kenney’s former finance minister, make him the perceived establishment favourite and a perceived front-runner.

But as much as an anybody-but-Toews movement stands to rise from among those who scorn the UCP’s establishment, there were seeds sown amid the criticism of Rob Anderson’s ideas at this forum of a movement within the party against the extremeness of Smith’s positions — just as developed in the CPC leadership debates with Poilievre.

Murmurs from party insiders suggest Smith is a top early contender for Kenney’s crown. There’s a similar signal in the lengths to which they went to steer clear of her biggest plan for a Smith government. Did they all come to Rob Anderson’s event just to boo her?