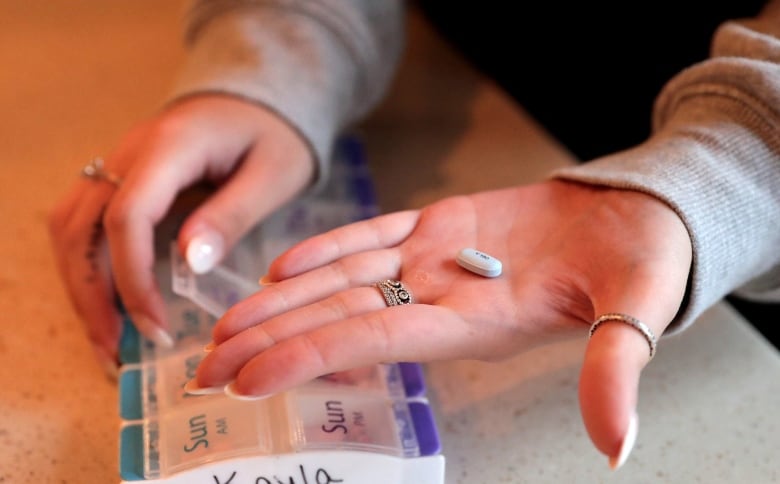 This column is an opinion by Jeremie Saunders, who lives with a genetic lung disease called cystic fibrosis. He is an award-winning actor, producer, and host involved with Canadian film, television, and podcasts, including the Sickboy podcast distributed on the CBC Listen app, and is a former host of the CBC TV children’s program Artzooka! For more information about CBC’s Opinion section, please see the FAQ.

I’m a co-creator of Sickboy, a comedy podcast about living with illness. I have a chronic and degenerative disease called cystic fibrosis, which is where the name of the podcast comes from — I am a sick boy.

Health Canada could change that, but so far it has shown little interest in helping me and 4,300 other Canadians who live with this disease.

Cystic fibrosis (CF) affects multiple organs, but it mainly targets the lungs and fills them with mucus. Imagine breathing only through a straw — that’s what breathing feels like for people with cystic fibrosis.

My lungs currently function at about 50 per cent capacity and will continue to decline until I attempt a double lung transplant or die.

My life revolves around medication and treatments. But it doesn’t have to.

Last year, a “miracle drug” for cystic fibrosis reached the market. It’s called Trikafta, and it is one daily pill.

Trikafta doesn’t treat the symptoms of cystic fibrosis. Instead, the drug treats CF at its source by targeting the genetic mutation that causes 90 per cent of cases.

That means Trikafta not only stops the degeneration of the lungs and other organs, but also drastically increases their function.

The United States Food and Drug Administration (FDA) fast-tracked approval of Trikafta, and it has also been approved in 17 other countries, including the United Kingdom.

So what’s preventing me from getting my hands on these lifesaving pills?

For a new drug to be sold in Canada, its manufacturer has to submit it to the government for approval. When evaluating new drugs, Health Canada considers how well they work and how much they cost, among other factors.

While no-one disputes that Trikafta is the next best thing to a cure, its price has been the sticking point.

Health Canada’s Patented Medicine Prices Review Board (PMPRB) has gone against the advice of Cystic Fibrosis Canada and imposed new price control guidelines that come into effect on Jan. 1, 2021. Meant to reduce the cost of medicines, they also make it more difficult for expensive drugs treating rare diseases to get approved and into the hands of Canadians who need them.

However, the Canadian cystic fibrosis community celebrated a huge win last week. After a year of hesitation in the face of these pending cost control guidelines, manufacturer Vertex Pharmaceuticals said Nov. 9 that it has “made the decision to move forward with our new CF medicines in Canada.”

Last week was a massive day for the Cystic Fibrosis community. With the announcement of Vertex planning to submit Trikafta to Health Canada for approval there was much to celebrate, but the hard work isn’t done yet! This week we speak with Stephanie Stavros, the first Canadian CF’er who was granted special access to Trikafta as she was laying on death’s door. Stephanie has an absolutely wild story of growing up with CF totally in secret. As 30+ some years of a closeted salty girl she saw some serious ups and downs. From spewing blood on a first date to becoming the mother of her own child, her story is incredible. 1:28:19

Submitting Trikafta to Health Canada for approval is the first step in making the drug available to people here.

But Trikafta still has to go through the approval process. And even if Health Canada gives it a green light, federal authorities will have to land on a maximum price for the drug. Then come the negotiations with the provinces to figure out who will pay, and how much.

I’m obviously biased, but I believe Trikafta is worth the price.

Trikafta eliminates a lot of other medical spending — on all the pills that treat the symptoms of cystic fibrosis, the hours in medical clinics, the emergency room stays, and the double lung transplants.

Just as Trikafta decreases other medical spending, it would help boost the economy by drastically increasing workforce participation by people with cystic fibrosis. Without Trikafta, a person with CF spends the estimated equivalent of four months of full-time work doing life-sustaining treatments every year. FOUR MONTHS! Heck, with four more months of free time a year I could likely solve world hunger or eradicate mosquitoes, and that’s just me!

The decision by Vertex to submit Trikafta for approval comes after a year-long standoff with Health Canada, so we’re already far behind other countries. Although people with cystic fibrosis are celebrating this monumental step towards accessing a life-changing drug, the hard work is just beginning.

On Nov. 26, 2012, a similar precision medicine called Kalydeco that treats a smaller percentage of cystic fibrosis mutations was approved by Health Canada. It wasn’t until June 2014 that a pricing agreement was landed on with Health Canada and the provinces.

Two years is a long time when we are talking about a progressive disease that kills.

Health Canada can’t drag its feet on Trikafta, because in the interim, Canadians with cystic fibrosis will pay with their lives. In 2018 alone, 51 Canadians died of complications from the disease, according to the Canadian Cystic Fibrosis Registry. How many more need to die before we see this drug in the hands of the people who so desperately need it?

I’ve lived with cystic fibrosis for 32 years. It hasn’t been easy and I don’t want to be a sick boy anymore. If Health Canada steps up to the table and acts quickly, maybe I don’t have to be.