Could Canada be a safe haven for climate refugees? 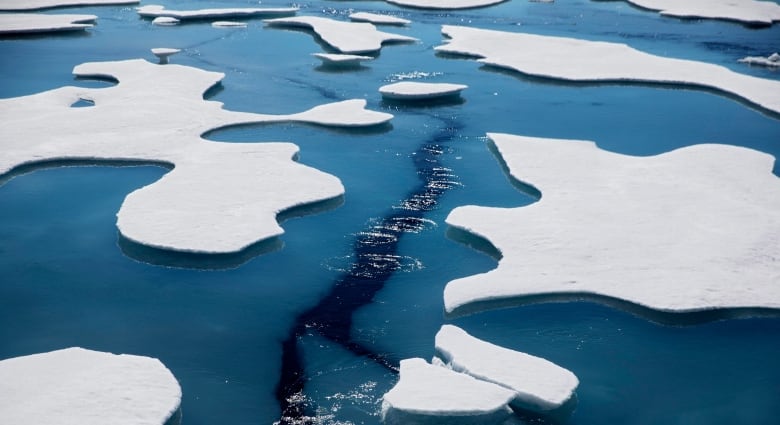 Young boys cover each other in mud near the village of Ambo, on South Tarawa, in the central Pacific island nation of Kiribati. The nation is made up of 33 islands which are at risk of being lost to rising sea levels — a result of climate change. (David Gray/Reuters)

This story is part of a CBC News series entitled In Our Backyard, which looks at the effects climate change is having in Canada, from extreme weather events to how it’s reshaping our economy.

Lying in the central Pacific Ocean, the islands of Kiribati look like a tropical paradise. Surrounded by crystal-clear water and coral reefs, with coconut palm and pandanus trees lining the islands, it’s straight out of a holiday brochure. On any given day, the temperature hovers around 30 C and rarely drops below 25 C.

But looks can be deceiving.

In 2015, Ioane Teitiota, a resident of Kiribati, sought (and was denied) refugee status in New Zealand. His reason for seeking haven? It’s estimated that by 2100, the Kiribati islands — as well as others in the Pacific — will have disappeared entirely, succumbing to rising sea levels, displacing potentially hundreds of thousands of people.

The question remains: Where will all these people go?

No country in the world will escape the consequences of climate change. Some will see increased drought, more frequent storms or rising temperatures.

Canada will likely see it all.

In the Atlantic, eroding coastlines can likely be expected; in central Quebec and southern Ontario, rising temperatures, with more frequent heat waves and long-lasting storms; the Prairies may face long periods of drought; Alberta and British Columbia could see increasing forest fires. And there have already been dramatic changes in the Arctic, with disappearing sea ice and thawing permafrost.

Each effect comes with its own consequences.

But with the changing climate, there will be areas in the country, previously considered unlivable, that may become more temperate. Some suggest this puts Canada in the unique position of being able to accept those who have been pushed out of their home due to climate change-related conditions: Climate refugees. 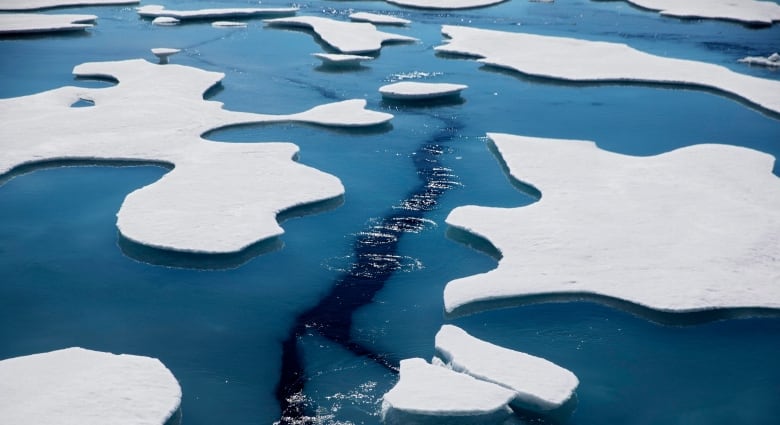 Sea ice breaks apart as the Finnish icebreaker MSV Nordica traverses the Northwest Passage through the Victoria Strait in the Canadian Arctic on July 21, 2017. Since the first orbital images were taken in 1979, Arctic sea ice coverage has dropped by an average of about 88,000 square kilometres each year. (David Goldman/Associated Press)

A 2010 report by the federal government, entitled Climate Change and Forced Migration: Canada’s Role, concluded that “best estimates suggest that hundreds of millions of people could be on the move in the coming decades due to the impacts of climate change. Canada has an opportunity now to plan an orderly and effective response to the coming crisis.”

But there doesn’t yet seem to be a solid plan in place, and that’s largely due to the 1951 United Nations Refugee Convention.

When a refugee isn’t a refugee

According to the UN Refugee Agency, roughly 68.5 million people have been forcibly displaced from their homes, 25.4 million of whom are refugees.

While the UN Refugee Agency keeps track of forced displacement, it doesn’t specifically monitor the number of people being uprooted due to climate change. In large part, that’s because its 1951 Refugee Convention doesn’t recognize climate threats as something from which a person may be fleeing.

“At present, climate factors themselves are not seen in the refugee convention as grounds for refugee status,” said Adrian Edwards, global spokesperson for the United Nations High Commissioner for Refugees (UNHCR). “The refugee convention typically covers conflict: wars and persecution.”

But as with increasing extreme weather events, climate change may be playing a role in conflict.

“Increasingly, we are seeing climate factors playing into situations that cause conflict, that cause the very things that produce refugees and internal displacement,” said Edwards.

The situation in Syria is of note, he said, as some believe the drought that occurred between 2006 and 2010 was in part a catalyst to the ongoing war that began in 2011. 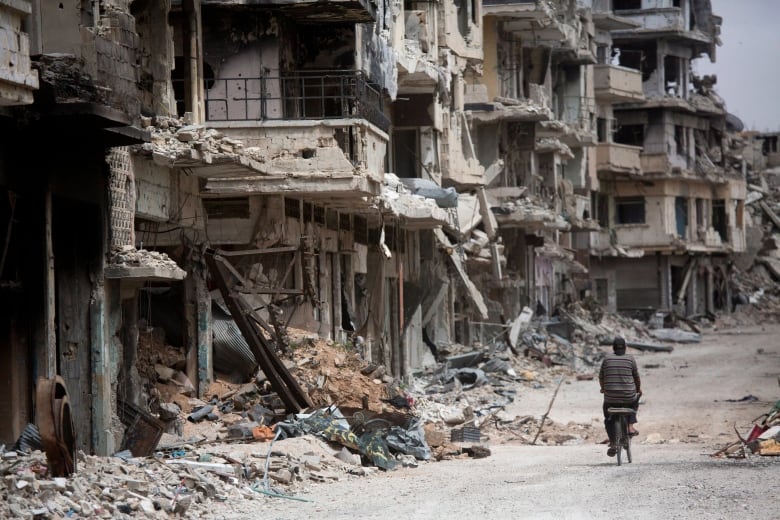 In this June 2014 file photo, a man rides a bicycle through a part of Homs, Syria, devastated by the country’s civil war. Climate change is more than rising thermometers, wildfires, droughts and storms; it even has a hand in altering whale songs, flowering plants and civil war. (Dusan Vranic/Associated Press)

Immigration, Refugees and Citizenship Minister Ahmed Hussen declined several interview requests from CBC News. However, a statement sent by his office said: “Generally speaking, in order to be considered for resettlement to Canada, individuals must be a Convention refugee as defined in the Immigration and Refugee Protection Act.”

This Canadian act largely abides by the Convention.

But the statement added that “with respect to individuals potentially impacted by climate change, decisions on actions the Government of Canada may take in the event of natural disasters are taken on a case by case basis.”

In late 2018, Canada was one of 167 countries that signed the UN’s Global Compact for Safe, Orderly and Regular Migration, which sets out that participating countries need to “identify, develop and strengthen solutions for migrants compelled to leave their countries of origin due to slow-onset natural disasters, the adverse effects of climate change.”

The pact, however, isn’t legally binding.

There isn’t any provision specific to climate change migrants in the Immigration Refugee Protection Act, said Jamie Chai Yun Liew, an associate professor at the University of Ottawa who specializes in immigration, refugee and citizenship law.

While a disappearing island may be a clear sign of losing your home to climate change, Liew said that not all change would be as easy to identify.

Although Canadian governments have been quick to respond to extreme environmental disasters, she said, the same response isn’t typically extended to “something more gradual, or something that is a little bit unseen or invisible.”

“I think there has to be a conversation about what is it that we want to respond to in terms of helping people,” Liew said.

Not everyone experiencing the effects of climate change will need to leave their country.

“The vast majority of people who need to move for climate-related reasons will probably relocate within their home country,” said Robert McLeman, an associate professor of geography and environmental studies at Wilfrid Laurier University in Waterloo, Ont.

Oftentimes, he said, it’s farmers suffering drought who move to a city. That puts added strain on resources and infrastructure, which can lead to pollution and overcrowding in cities, ultimately encouraging residents to leave the country.

But does that constitute migration due to climate change? It’s a fuzzy issue.

“Most of these cities cannot cope with the influx of people during these weather and climate disasters,” McLeman said. “It sort of generates a negative spiral in that you get climate and weather-related events driving people into cities and the quality of life goes down.”

McLeman said we may see internal migration within the U.S., particularly from places facing eroding coastlines, like southern Texas, Florida and Louisiana. And perhaps those people will consider moving across the border. 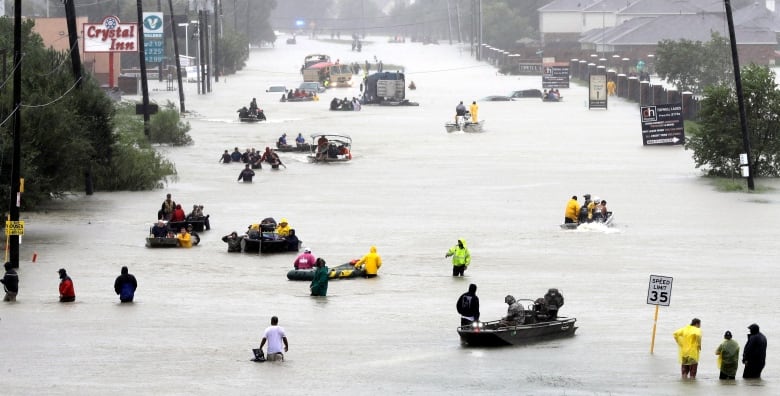 In this August 2017 file photo, rescue boats fill a flooded street as flood victims are evacuated from Tropical Storm Harvey in Houston. It was a slow, rainy roll that made Harvey a monster storm, causing billions of dollars in damage. (David J. Phillip/File/Associated Press)

It’s unlikely Canada will see a sudden, rapid influx of climate refugees, said Luisa Veronis, an associate professor of geography, environment and geomatics at the University of Ottawa. But an influx could build over time, she said, so it’s important that our governments begin to plan for it, particularly when it comes to infrastructure.

“Preparing and preventing down the road will save a lot of the cost,” Veronis said, pointing to the damaging floods in eastern Ontario and southern Quebec this spring.

It’s likely that the climate migrants Canada will see will come from nations who already have a history of migrating here, such as the Philippines, Bangladesh, India and China — all of which are some of the most vulnerable to climate change, either due to poverty, population pressure, or geography that is particularly susceptible to rising sea levels and extreme weather events.

As for the people of Kiribati, it’s unknown where they will end up, or if they will leave at all.

Former Kiribati president Anote Tong believes there could be plans to recreate the tiny nation as a floating island — something that sounds straight out of science fiction, but is an idea some engineering firms are already trying to design.

And just in case, Tong has also bought an island in Fiji for the country’s more than 100,000 residents.

Today, Tong travels the world, speaking about the changing climate and calling governments to task on their inaction.

But he doesn’t see those who may face the harsh fact that their homes are no longer habitable as refugees. Instead, he believes in “migration with dignity,” arming migrants with education and skills so they can migrate voluntarily.

In the meantime, people who have little to do with driving up greenhouse gases are the ones who will likely face the harshest consequences of a changing world.

“I think [climate change] will fall on the people who it affects the most, and they are the ones who will find resilient solutions to their own particular plight,” Liew said. “Unless there’s some vested interest for a state to tackle this issue, I’m not really sure the international community will step up and do anything about it.”