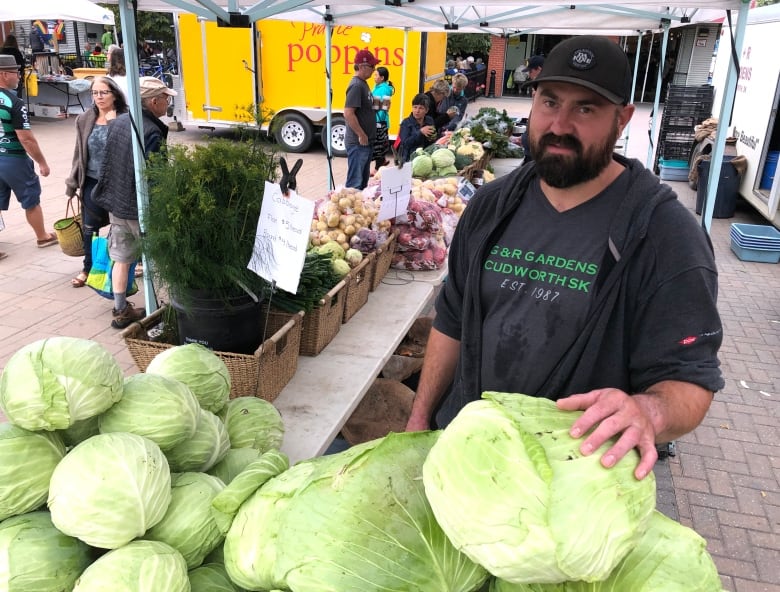 The Saskatoon Farmers’ Market was set to celebrate its 44th year with a corn-focused feast, but the event had to be cancelled since it’s been a challenging year for corn producers across the prairies.

Last year’s event included the corn feast and a corn shucking contest amidst the twang of banjo music. But when the market’s executive director Erika Quiring approached producers this year about getting cobs for the crowd, she got some bad news instead.

“They were concerned that they wouldn’t even have enough for their regular customers this weekend,” she said. “So we decided to make sure that there is enough corn for them to sell, instead of diverting that corn for just snacks.”

She said she didn’t realize it was a tough year for growers, as in the past the kernel-carrying produce has been in ample supply.

“We kind of take corn for granted,” she said. “There is this like golden, delicious food that we have this bounty of every year. Like can there be more corn? But this year it’s kind of the opposite.”

The corn-growing season got off to a late start in Saskatchewan, impacting producers like Audrey Simpkins, of Simpkins Market Garden. They’ve been selling produce at the Farmers’ Market for 43-years, but this year has been tough.

“The germination was not very good, so we reseeded more fields, but nothing really started until we got the rain,” she said. “Now we’ve had awfully high winds, we’ve had a hail storm and the cooler nights slow it right down.”

A small pile of corn for sale on Simpkins’ table was the last of the family’s early patch and she said if there’s warmer weather in the coming days, there’s a good chance there will be more of it.

“If it doesn’t freeze, it’ll be coming,” she said. “But we need some hot sunny days and some warmer nights.”

The colder summer has also contributed to a slower season, said Kirk Medernach, with Gail’s Greenhouse at G & R Gardens. He said while a touch of rain in early June did get things started, production is still slower than usual.

“If we could get a stretch of warm weather yet before the fall sets in would be good to move things along,” he said. “That’s something that we didn’t have throughout the summer that we typically do, is a week or two of plus 30 weather.”

“You know we only had a day here and there this summer, so yeah all those things just combined together is just making it for a late year.”

Saskatchewan producers aren’t the only ones seeing a slow season, as growers in Manitoba have also been hurt as a result of the dry conditions.

“Well it’s a little early to say exactly where the yields are going to be at, but the yields have been hurt by drought, particularly in the last three weeks,” said president of the Manitoba Corn Growers Association, Dennis Thiessen. “Rainfall is critical for kernel fill. If we get rain on the weekend, that’s going to help.”

Thiessen said rainfall levels across Manitoba are at about half of what’s usually expected and came earlier in the season. This can affect late-season crops, like corn and beans, as both of the plants have a larger window where they need moisture.

“With a very dry August following a not terribly wet spring and early summer it’s really hurting the plants and yields will be affected,” he said.

Most of the corn produced in Manitoba is used for things like ethanol and animal feed, but Thiessen said the low yields expected there are presenting some concerns from livestock producers.

However, he said it’s not uncommon for corn to be imported from the U.S into Canada to ensure demand is met.

Quiring said there is still a chance the Saskatoon event could be rescheduled, but said it all depends on how the next few weeks pan out.

But for people like Simpkins, who is sad the event wasn’t going ahead as scheduled, the uncertainty is nothing new for farmers in the area.

“Well, that’s Saskatchewan for you,” she said.  “You can’t count on anything.”