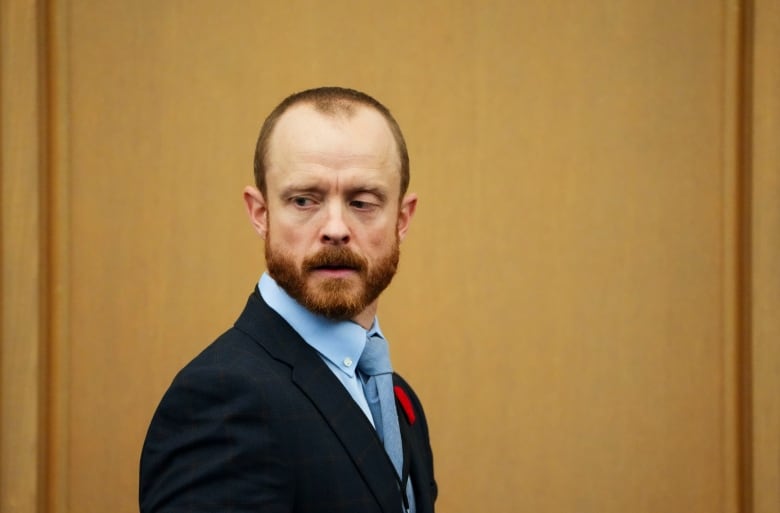 A lawyer for the Ottawa Police Service accused Tamara Lich —  one of the more prominent people involved in the anti-COVID-19 restriction convoy protest —  of having a selective memory of last winter’s events during a tense moment of cross-examination Friday morning.

The Medicine Hat, Alta. woman is appearing before the Public Order Emergency Commission, which is reviewing the federal government’s decision to invoke the never-before-used Emergencies Act to clear the crowds and vehicles that blocked parts of Ottawa’s downtown for three weeks.

At issue is Lich’s claim that she was never directly told to leave Ottawa during last winter’s protests.

Lawyer David Migicovsky pushed back, showing her a police log saying that a police liaison team (PLT) told demonstrators that they needed to leave and met with Lich and other organizers on Feb. 16.

“PLT advised them to depart and message this out to others,” said the log.

“I believe I said something to the effect of, ‘I cannot believe that you’re about to do this to your own people,'” she said. “I was crying because of what they were proposing to do to Canadian citizens.”

Lich said she was never told to leave and felt the message to depart was a suggestion.

“It seems to me your memory is selective,” said Migicovsky. “When I take you to something that implicates you, you have no memory.”

“That’s not a proper question,” said an audibly frustrated Miller.

Lich testified that she was under the impression she would be allowed to stay if she remained peaceful.

“My understanding was that as long as we were peaceful and complied with the order, we were permitted to stay,” she said in response to a question from Miller.

WATCH | ‘I was never told to leave,’ said Lich 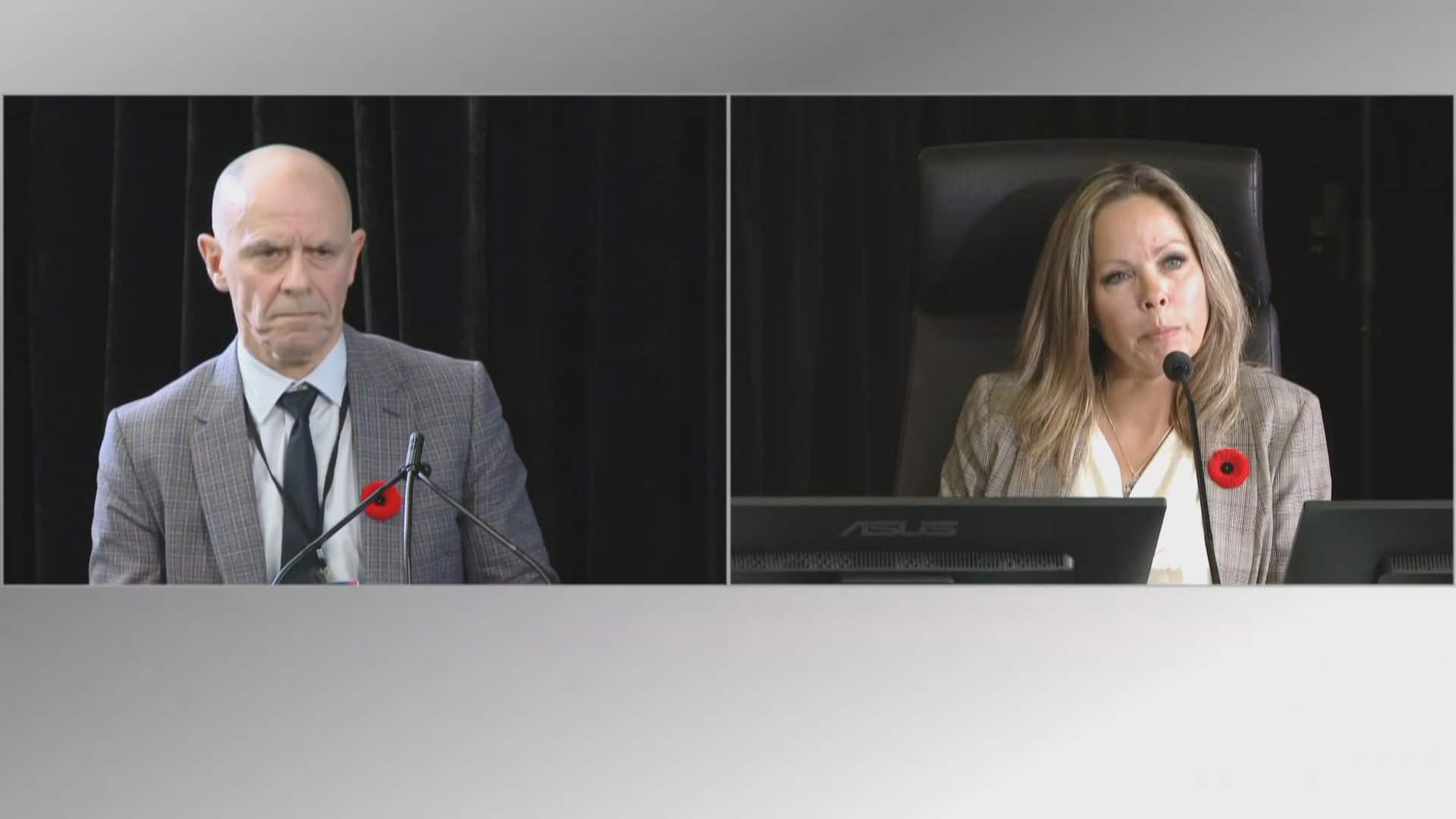 ‘I was never told to leave,’ said Lich

Tamara Lich, one of the organizers of the self-described ‘Freedom Convoy,’ is asked by an Ottawa Police Service lawyer during the Emergencies Act inquiry about officers telling protesters to leave Ottawa.

Lich and a fellow organizer, Chris Barber, were both arrested the day before hundreds of police officers in tactical gear moved in to remove the protesters from the streets around Parliament Hill in February.

The pair have been accused of mischief, obstructing police and counselling others to commit mischief and intimidation. Their trial is scheduled for next fall.

One of Lich’s fellow convoy organizers, former RCMP sniper Daniel Bulford, said he encouraged protesters to continue to come to downtown Ottawa despite the invocation of the Emergencies Act because he hoped police wouldn’t follow through on enforcement.

“I was naively hoping that my brothers and sisters in law enforcement would see the truth on the ground as opposed to what the government and the media was saying, and that they would take a historic opportunity to stand up for our Charter of Rights and Freedoms,” he said during his testimony Friday.

“I still had faith that frontline members would do the right thing.”

Protesters thought they could stay after act was invoked

The commission heard from two other protesters, Chris Deering and Maggie Hope Braun, who said they didn’t feel they had to leave the city after the Emergencies Act was triggered.

Both Deering and Braun, who were both arrested but not charged as part of the massive police operation that ended the protest, said they felt compelled to come to Ottawa out of frustration with the government’s COVID-19 restrictions. 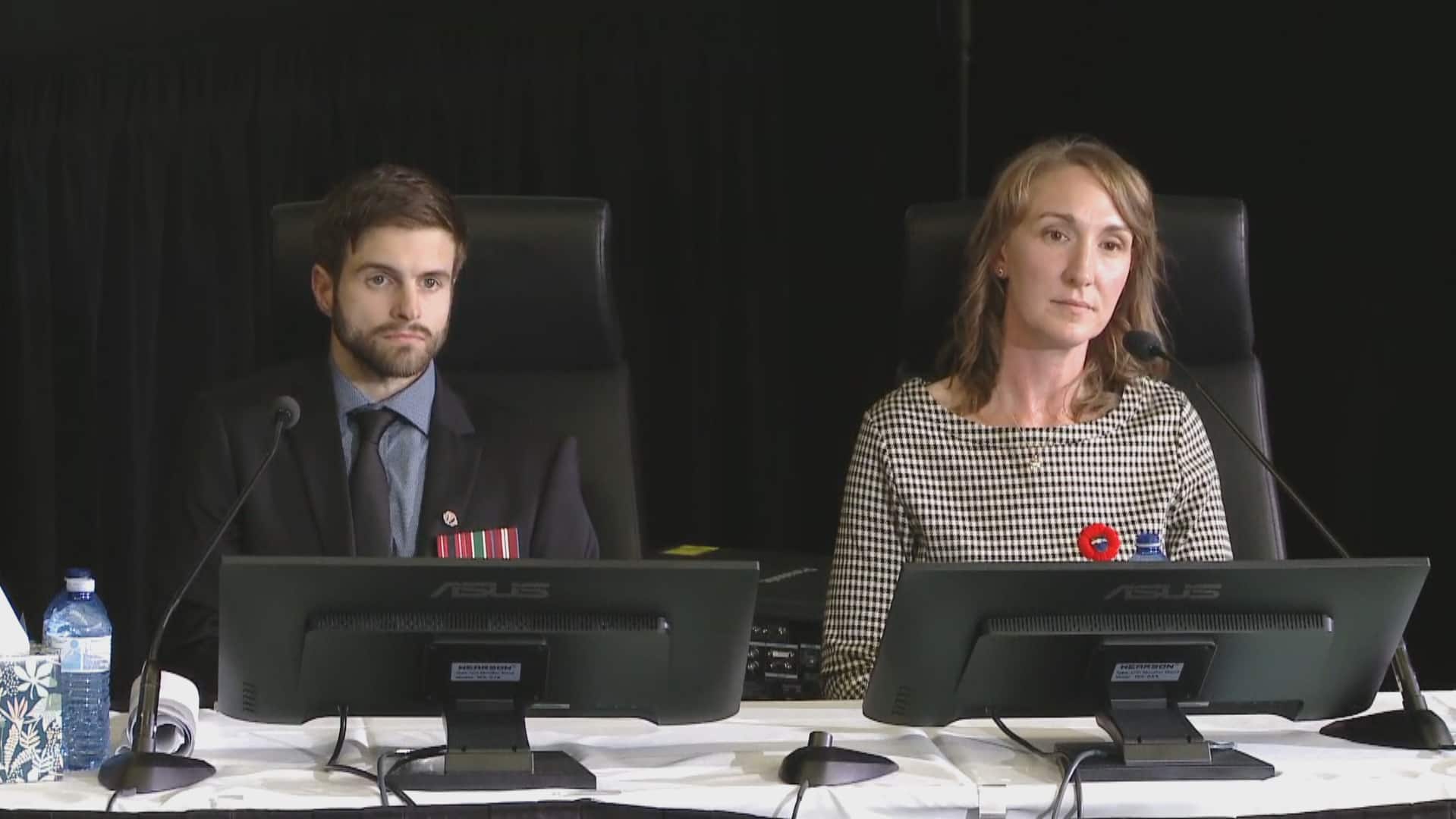 Maggie Hope Braun says she felt unwelcome because of the media and comments from the prime minister, but at no point did she think she was breaking the law by participating in the protests in Ottawa.

Invoking the act gave authorities new powers, allowing them to freeze the finances of those connected to blockades and protests, ban travel to protest zones, prohibit people from bringing minors to unlawful assemblies and commandeer tow trucks.

The Ottawa police circulated notices to protesters warning them that they’d face severe penalties if they stayed within the unlawful protest sites.

Braun said it wasn’t clear to her that she wasn’t permitted to be in the Parliamentary precinct. She said she didn’t read or listen to mainstream news outlets.

“I wasn’t directly told that I wasn’t allowed to be there and that it wasn’t lawful for me to be there,” Braun said.

Deering said he did not think the Emergencies Act was lawful.

“In my eyes, it was an unlawful mandate. I’m a free citizen of this country. I’m a taxpayer. I’m a veteran. I’m a good person. And I felt I had the right to be there with my Canadian citizens to try to protect them,” he said.

All the witnesses Friday expressed frustration with the federal government’s direction and said they felt compelled to join the protest against vaccine mandates.

Lich told the inquiry late Thursday that she joined the “Freedom Convoy” after failing to get a response from members of Parliament she emailed about ending COVID-19 restrictions.

“I was growing increasingly alarmed with the mandates and the harm that I was seeing the mandates inflict on Canadians,” she said.

“I heard from people that had lost their jobs and lost everything. I have the tears of thousands of Canadians on my shoulder, who every day told me that we were bringing them hope.”

Lich described the protest as peaceful and said she wouldn’t tolerate threats and hate speech.

“This is the biggest love fest I’ve ever participated in,” she said.

The Ottawa Police Service has told the inquiry it laid 533 charges in relation to the convoy.

Lich testified Friday she was not aware of claims that crowds would sometimes swarm police and bylaw officers and was not aware of any death threats levelled against politicians until she began to watch the commission proceedings.

On Thursday, Lich said the honking of truck horns — a hallmark of the protests —  even became a bit too much for her.

“You know, trying to walk down the street and have a conversation with somebody was sometimes difficult,” she said.

On Friday, she said she couldn’t hear the truck horns from her downtown hotel room.

“I didn’t really notice it, the horns honking. And I was right downtown,” she told Champ. 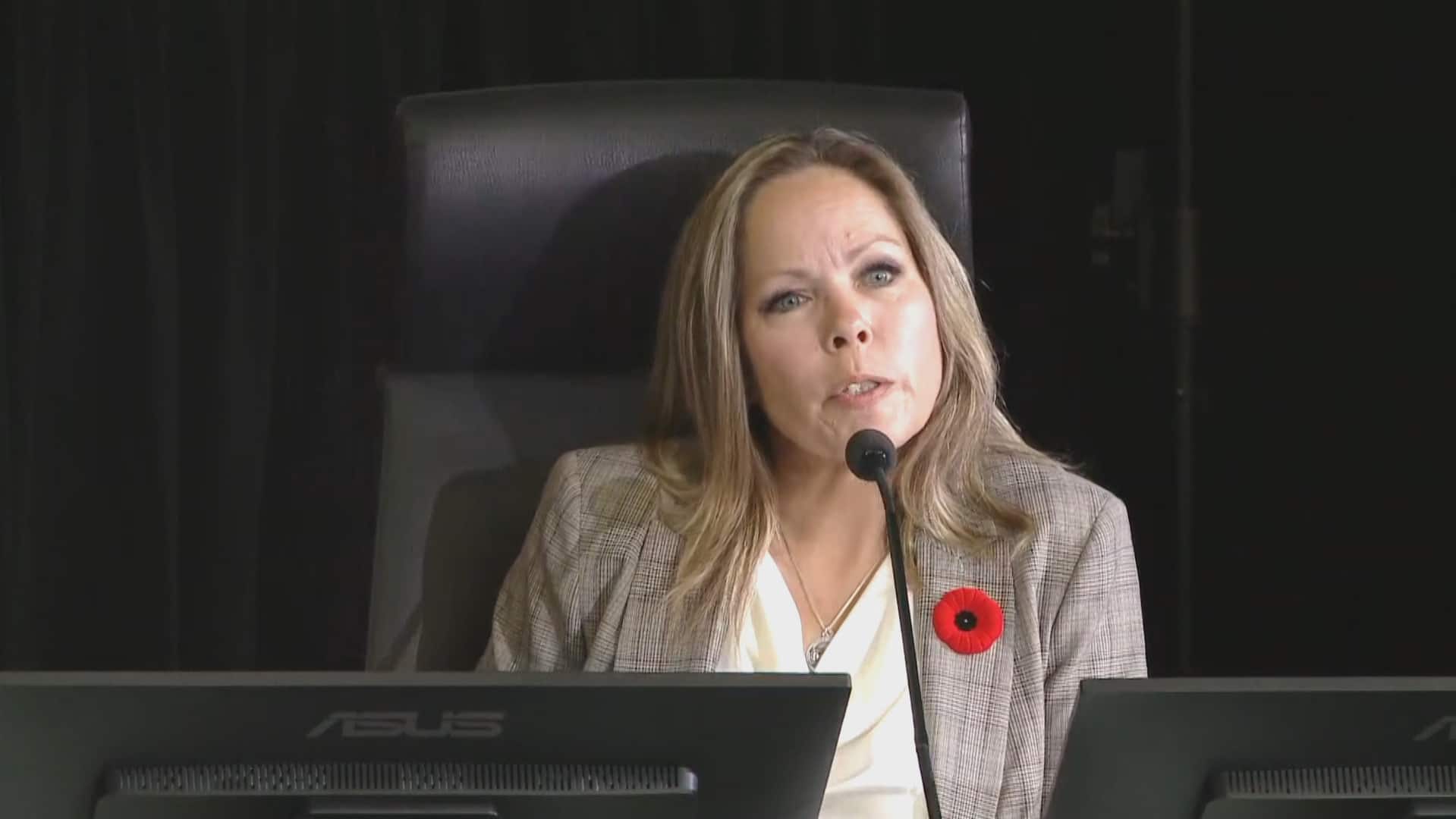 Tamara Lich, one of the organizers of the self-described “Freedom Convoy,” was asked about the disruption of honking horns during the truck protest.

“You wouldn’t want a big rig to pull up, for example, in front of your parents’ home and park and idle for 24 hours a day for several weeks honking their horn,” asked Champ.

Lich responded that her ex-husband was a tool push on a drilling rig.

“It’s not pleasant is it?” countered Champ.

A lawyer for the government asked her about an Ontario Provincial Police report that had identified a driver with the blockade who had made inflammatory statements and who had brought a protective vest.

“Which he claimed would stop an armour-piercing round. He claimed he brought it to protect himself and that he had worn it at the blockade,” said the OPP document.

“OPP field officers have spoken with this male and his truck has been positioned in front of the Chateau Laurier since the beginning of the protest.”

Lich said she was not aware of that incident.

She said while many people see her as the convoy protest’s leader, she didn’t feel that she was.

The commission also heard from the founder of the controversial Diagolon community, Jeremy MacKenzie. He pushed back on claims he heads an extremist group and even questioned the RCMP’s assertion that symbols tied to his group were uncovered in a raid in Coutts, Alta.

Mackenzie – who describes himself as podcaster and comedian – has, along with his followers, pushed back against the suggestion that the group is violent or racist. They claim they’re simply joking and trolling. 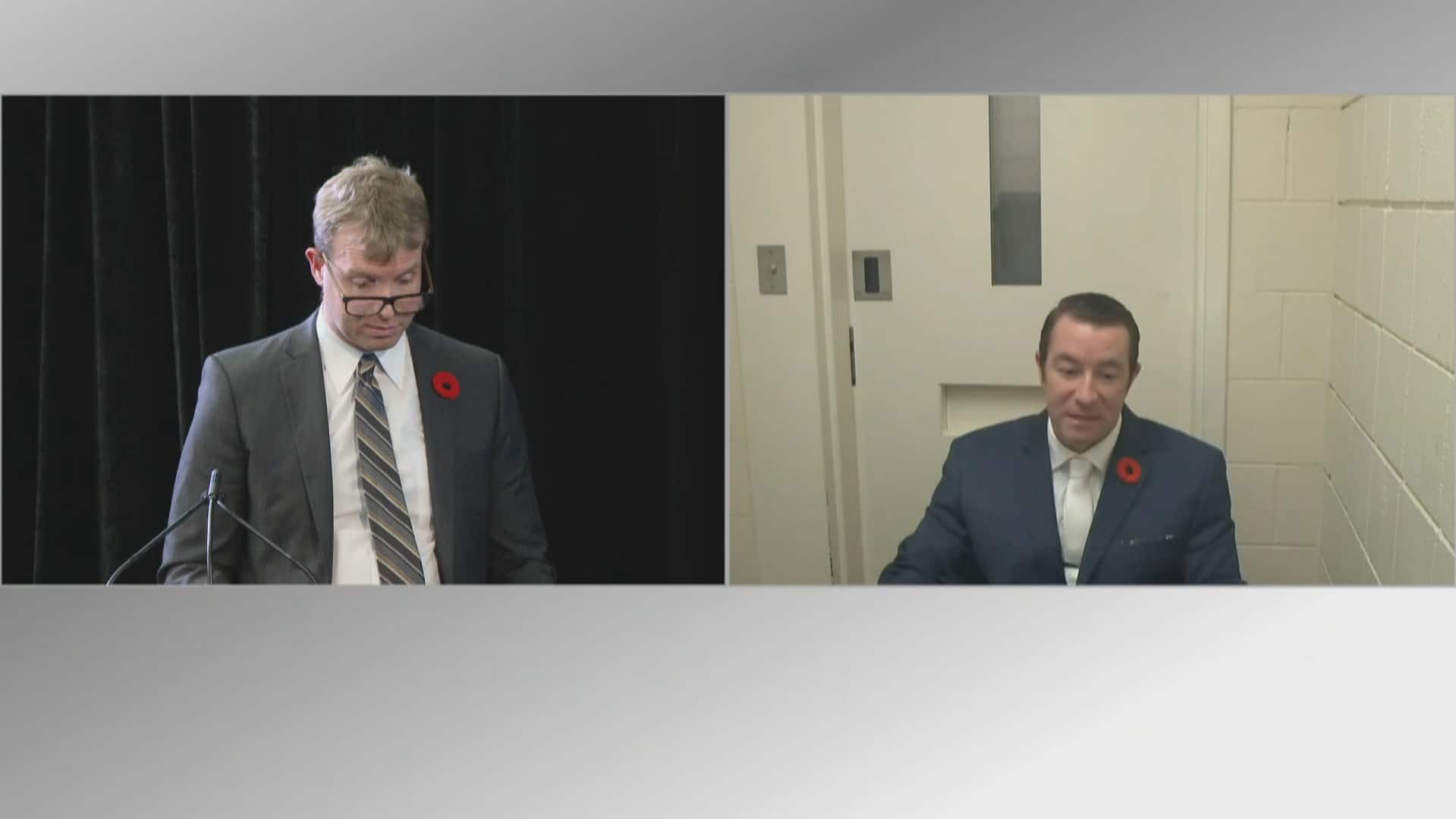 Jeremy MacKenzie, founder of the online group Diagolon, was asked during the Emergencies Act inquiry if he believes law enforcement planted the group’s symbol on body armour.

Two patches featuring the Diagolon flag – a white line running diagonally on a black background – were found on body armour seized during the execution of RCMP search warrants in Coutts, Alta. in the wake of the border crossing blockade.

Photos of MacKenzie with Chris Lysak – who was arrested in Coutts last winter and faces charges of conspiracy to murder, possession of a weapon and mischief – were shown to the commisison Friday.

MacKenzie said that if those charges are proven true, he’ll denounce Lysak.

He also said he believes it’s not impossible that the RCMP planted Diagolon patches on the body armour seized by police in Coutts.

“At the time, and still, I am skeptical of the RCMP particularly but law enforcement in Canada,” he said.

“It’s not outside the realm of possibility that something like that is very easily replicated could be planted. I’m not suggesting that it certainly has or has done, but I would leave that open to possibility.”

Mackenzie compared being a fan of Diagolon to being a sports fan.

“You could say it’s as simple identifying as a Toronto Maple Leafs fan by putting a sticker on your truck. It’s really that simple,” he said under questioning from a commission lawyer. 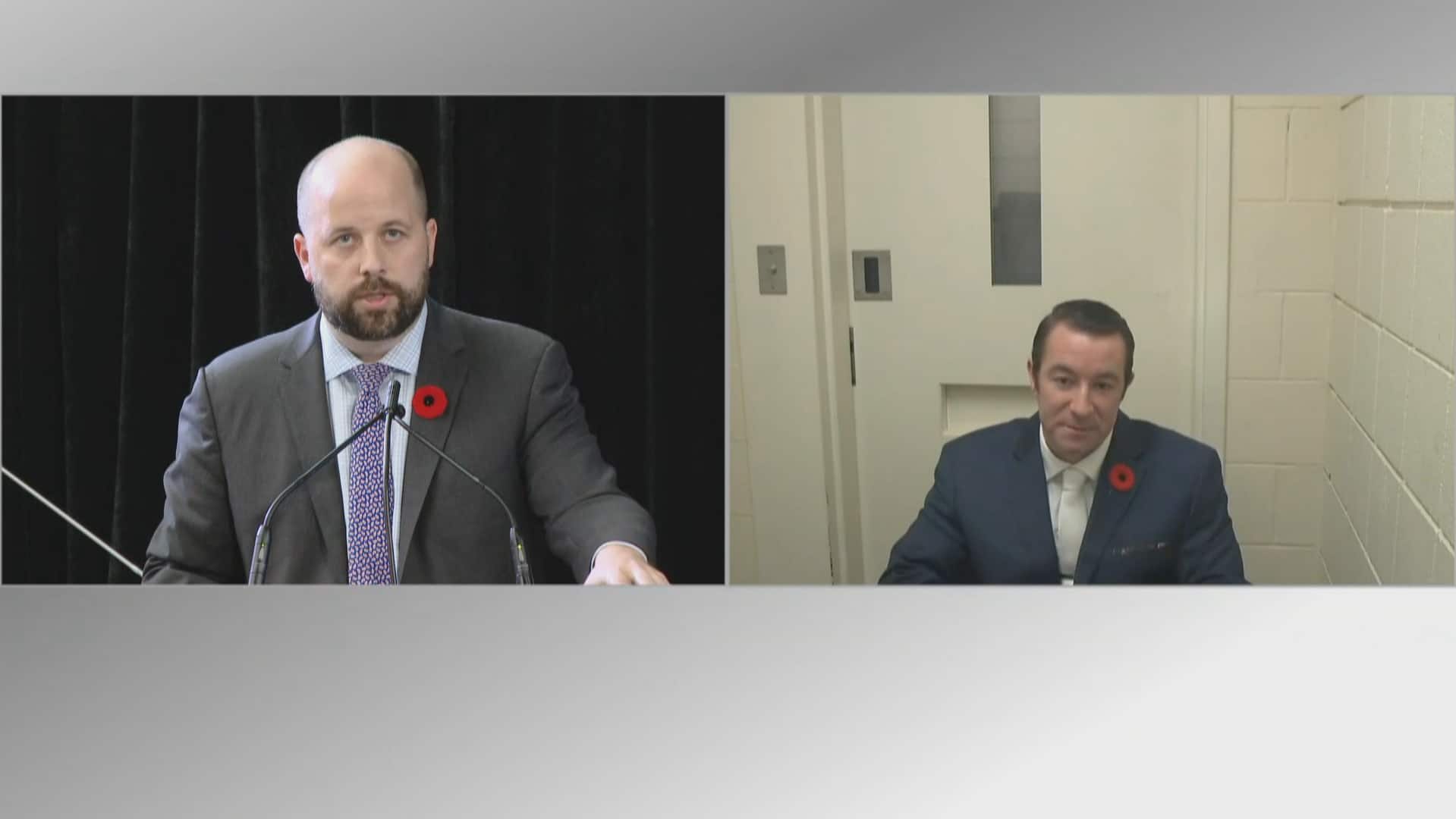 Mackenzie was asked by lawyers at the Emergencies Act inquiry about fans of Diagalon being members of the community. He compared it to being a Leafs fan by simply ‘putting a sticker on your truck.’

MacKenzie said that while he was not an organizer of the protests, he tried to use his platform to urge his followers to behave themselves while protesting.

“Don’t even speed,” he said in one video shown at the inquiry filmed before the protest started.

“An increased Diagolon following will also increase the number of consumers of the extreme anti-government, anti-authority and anti-law enforcement messaging espoused by key figures within the community,” said the report.

MacKenzie said no one from CSIS has ever reached out to interview him.

Next week, the commission will hear more about the Coutts blockade when Mayor Jim Willett and Marco Van Huigenbos – a councillor in Fort McLeod, Alta. who was one of the organizers of the border blockade – begin to testify.

Van Huigenbos faces one count of mischief over $5,000.