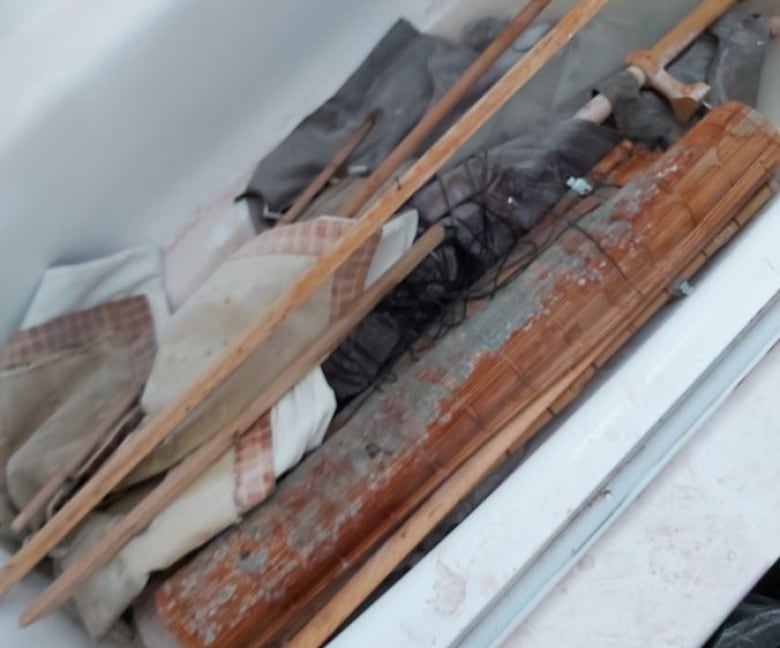 When a fire destroyed Charlene Mills’s home and all her possessions, she felt it was a “blessing” she had a rental house in Dartmouth, N.S., in which to move — it just needed a little work.

But that blessing would soon become a curse, Mills said, after she posted an ad on Kijiji looking for a contractor and hired Robert Allan Monk soon after.

Three weeks later, when she inspected the work, Mills said she was horrified to find cigarette butts everywhere — stubbed out on top of her refrigerator, on the stove and covering her draperies that were, for some reason, dumped into the bathtub, along with the window blinds.

“We have no ceiling,” she said. “It’s atrocious the state that he left the property in.”

What Mills and her partner didn’t know at the time was that Monk, 50, had three previous fraud convictions, and was forbidden from using online ad services such as Kijiji and Facebook to find clients, an order he’s accused of ignoring.

Mills is one of several people who told CBC that Monk took their money for a variety of contractor jobs that were never completed.

Earlier this month, Halifax police announced two-dozen new charges against Monk, including eight fraud-related offences. The 50-year-old is accused of taking money from customers but not doing the work. He has not yet entered a plea on the charges.

His most recent fraud conviction was on June 27, 2018. He received a suspended sentence, 18 months probation and was ordered to pay restitution of $6,210. On Dec. 13, Monk was sentenced to 15 days in custody for not paying the restitution.

When reached for comment, Monk said on “the advice of counsel, I have no comment at this time.”

Six days after fire destroyed her house, Mills posted on Kijiji looking for a general contractor. She and her partner wanted the work done as quickly as possible, as they were living in a hotel.

Mills said they showed a number of contractors through the property but ultimately decided on Monk’s services since he was confident he could do the work on the fastest timeline.

“In retrospect … that should have been a red flag for us,” said Mills.

Given that Mills and her partner were busy dealing with the fallout from their devastating fire, they weren’t around to micromanage the work at their rental property.

Mills said they started to pay closer attention when the one-week job dragged on for two, then three weeks. They would drive by when Monk said he was working on the property but there would be no one there.

When they finally checked their property, Mills said she was shocked at the state of it.

She ended up taking Monk to small claims court and won a judgment for nearly $3,000, the money she had given Monk. But given what she’s learned about him, she doesn’t think she’ll ever see her money.

Staircase left open to a 4½-metre drop for months

Christine Gibbons hired Monk in January to do some work on the staircase of her Hammonds Plains, N.S., home after he contacted her mother on Facebook, answering a post looking for work on another job. Gibbons sent him $8,000 in an e-transfer, half the amount agreed upon for the project.

“I kind of liked the idea of giving money to the little guy … [he] seemed to know what he was talking about,” she said. “He asked for half of the money up front and then continued to ask for more.”

Gibbons said Monk would often fail to show up, or the work he did do was not done well. She said he and his crew came and ripped out the railings on the stairs, leaving a 4½-metre drop open to the floor below.

“And we have three kids, we have two very large dogs … and so we had communicated multiple times that we can’t have this completely open for too long, and just no sense of urgency at all to do anything about it,”  said Gibbons.

She said there were red flags but Monk always had an excuse, such as his dog was sick, he wasn’t feeling well, or there was an emergency on another job.

After six months, Gibbons said she and her husband decided to cut their losses and cut Monk loose.

“I was literally losing sleep. I couldn’t eat. It was horrible,” said Gibbons.

That’s when Gibbons went online and did a search. She found multiple posts from others who had run-ins with Monk.

Family members eventually pitched in and finished the job.

It’s not just those looking for work to be done on their houses who say Monk has had an impact. Another man with the same name said he’s been mistaken for Robert Allan Monk for more than a decade.

“I run a couple legitimate businesses and meeting … new people there is the piece of info I always need to sneak into the conversation: ‘If you Google my name, there is a scammer out there with the same name,'” said Rob Monk, who is 34 years old and works as a real estate developer.

“I have countless stories about angry people calling me thinking I was him.”

He said his father, also named Robert Monk, is “completely beside himself with embarrassment,” and would like their names cleared.

Others have assumed the contractor Robert Monk is linked to Monk Renovations run by Dan Monk, even though there’s no affiliation.

Greg Lapierre hired Robert Monk in June to renovate his garage near New Ross, N.S. He wanted to replace the siding and the aging roof with a metal roof. Lapierre called Monk’s references, who said he “was a great guy” to work with.

Lapierre said he paid Monk nearly $14,000. A crew ripped off half the roof and left it open to the elements. After some prodding, Lapierre said Monk’s crew returned and strung up a cheap tarp to cover tar paper that kept peeling up, but it wasn’t enough.

“I mean, that’s been 40 to 50 years old and it’s never seen water inside at all until now,” said Lapierre.

Lapierre said when he confronted Monk about getting his money back, Monk claimed he had no money to give.

In June, Montana Piñyero moved with her husband and daughter to Nova Scotia. The business she had run for 20 years in Texas went under due to COVID-19 and she decided it was time for a change back in her home country.

They decided to start LaHave Regenerative Farm in Lower Branch, outside of Bridgewater, N.S., and raise chickens, goats, geese and kunekune pigs.

She needed a fence to contain her growing flocks and herds and hired Monk to do the job, after he contacted her from her post on Kijiji.

She said Monk asked for 25 per cent of the project cost up front  —  $1,375 to be sent via e-transfer. Piñyero said the crew Monk sent out didn’t even bring their own tools and broke the auger she had purchased and had already used to drill 100 post holes without issue. That night Monk called her and asked for another 25 per cent deposit.

She refused and that was the last time she spoke to him. Like the others CBC spoke with, she doesn’t think it’s likely she’ll see her money.

“I don’t want him to do this to more people. I don’t want other people to go through what we went through,” said Piñyero.

What you can do to prevent fraud

Sue Labine, who is with the Canadian Anti-Fraud Centre, said there’s been an increase in fraud as more things move online because of COVID-19.

She has some advice for people to reduce the chance of being defrauded online:

Police would not say whether more charges against Monk are anticipated. He is next scheduled back in court Jan. 21.