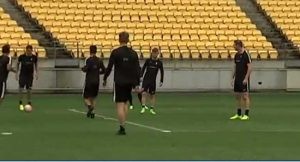 New Zealand soccer coach Anthony Hudson will be looking to build on his success in the 2016 OFC Nations Cup when he takes his 23-man squad to Russia for the Confederations Cup.

The 36-year-old, son of Chelsea, Arsenal and England midfielder Alan Hudson, became the national coach in 2014 and guided them to victory over Papua New Guinea in the OFC Nations Cup final 12 months ago, which gave New Zealand their fourth appearance in the Confederations Cup.

New Zealand have never won a match at the Confederations Cup, so Hudson will be looking for goals from 22-year-old Ryan Thomas, who plays for PEC Zwolle in the Eredivisie after he scored twice for the All-Whites in their 2-0 World Cup qualifier win against Fiji in March.

Andrew Durante skippered New Zealand in that match, but he will be giving the armband to Leeds United’s Chris Wood, who scored 30 goals for the English second tier side this season.

Another possible source of goals is 35-year-old Shane Smeltz, who first played for New Zealand in 2003. He is the country’s second-highest goalscorer with 24.