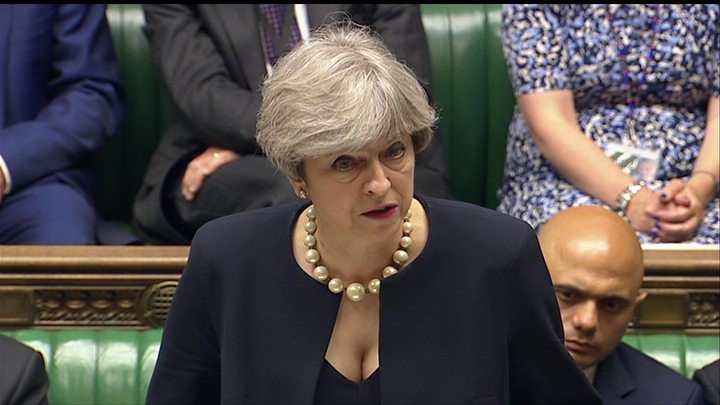 Tower blocks across the UK are being examined after the London blaze, which left 79 people dead or missing, presumed dead.

Three samples have been shown to be “combustible” and more results will be made public in the next 48 hours.

A No 10 spokeswoman said it was a “matter of absolute urgency” to tell residents.

Theresa May said all local authorities responsible for the flats had been told.

The announcement comes after the boss of Kensington and Chelsea Council resigned after criticism of the London authority’s response.

Speaking in the Commons, Mrs May said that the council “couldn’t cope” in the aftermath of the fire, and that it “was right” its chief executive, Nicholas Holgate, had stepped down.

Councils were told to give details to the government about the cladding they used in the tower blocks by Monday.

The Department for Communities and Local Government is then co-ordinating tests on it – with up to 100 able to take place in a day.

A spokeswoman from Downing Street said: “So far, three samples have been found to be combustible.

“We are in touch with all the local authorities to encourage them to urgently send us the samples and then we will carry out the checks that we need to see where we are with that.”

She added: “Obviously nobody will be living in buildings that are unsafe. They will be rehoused if they need to be and landlords will be asked to provide alternative accommodation where that’s possible.”

Camden Council confirmed that cladding used on its Chalcots estate would be removed after safety tests.

Councillor Georgia Gould, leader of the council, said: “The new results from the laboratory show that the outer cladding panels themselves are made up of aluminium panels with a polyethylene core.

“Therefore, the panels that were fitted were not to the standard that we had commissioned. In light of this, we will be informing the contractor that we will be taking urgent legal advice.”

Residents at a 22-storey block of flats in Tottenham, north London, have been sent an email – seen by the BBC’s Victoria Derbyshire programme – saying the building has the same cladding as Grenfell Tower.

Rivers Apartments – which is shared ownership, so classed as social housing – was built just two years ago, with the cladding incorporated as part of the design.

It is understood the block is clad in Reynobond PE, the same brand of cladding believed to have been used on Grenfell Tower.

The programme was told the tower passed all building regulation checks by Haringey Council.

Unlike Grenfell Tower, this block does contain modern safety features, such as a sprinkler system.

Newlon Housing Trust, the housing association that part-owns the block, said it had arranged with the fire service to carry out more checks.

It is still waiting for final test results to confirm it is the most flammable type of cladding.

It says the cladding on the building may have to be replaced.

More than £700,000 has been paid out to survivors of the 14 June fire and Mrs May said she wanted to reassure them that no money would have to be repaid.

She also said resources would be available to everyone affected by the fire, regardless of their immigration status.

“I would like to reassure people that we will not use this tragic incident as a reason to carry out immigration checks on those involved or on those providing information to identify victims or those assisting with the criminal investigation,” said Mrs May.

“We will make sure that all victims, irrespective of their immigration status, will be able to access the services they need, including healthcare and accommodation.”

Replying to Mrs May’s statement, Labour leader Jeremy Corbyn said Grenfell Tower residents were “let down – both in the immediate aftermath and so cruelly beforehand”.

He said: “At least 79 people are dead – it is both a tragedy and an outrage because every single one of those deaths could and should have been avoided.”

Mrs May said she expected to name the judge who will lead the inquiry within the next few days.

“We want to ensure when the judge takes charge, people feel they can have full confidence in the inquiry,” she said.

“No stone will be left unturned. For any guilty parties there will be nowhere to hide.”

The fire destroyed 151 homes – most in the tower block itself, but also a number of surrounding properties.

Mrs May said that 164 “suitable properties” had now been found for those made homeless, and they were in the process of being checked before residents can move in.

The new properties include a block of 68 flats in Kensington and Chelsea, sold to the government by the developer at cost price.

On Wednesday, the PM apologised for “state” failures following the Grenfell blaze. Later that day, Kensington and Chelsea Council confirmed that Mr Holgate was resigning.

In a statement, he said that Mr Javid had asked him to go, adding that his continued presence would be a “distraction” – DCLG denies this.

NHS England said that 10 patients across four London hospitals are still receiving care following the fire in West Kensington. Five of them are in critical care.

One of the hospitals which has looked after patients, King’s College Hospital, confirmed it had treated three people with an antidote to cyanide poisoning – although it did not confirm whether they were given it as a precautionary measure.