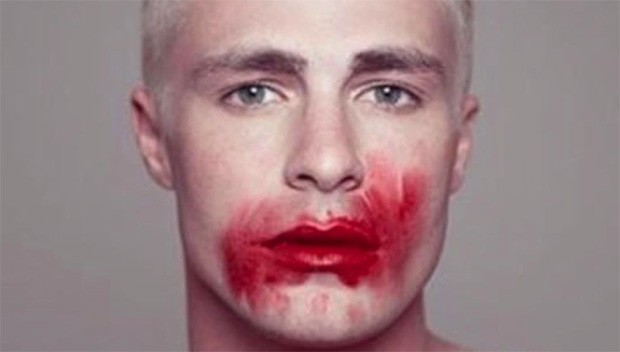 The Arrow and Teen Wolf fan-favorite is set to star in American Horror Story season seven, Murphy and Haynes both announced on Instagram. This will be the 28-year-old’s second appearance in Murphy’s TV world, as he guest-starred in a season two episode of Fox’s Scream Queens.

“American Horror Story season 7…Already feels like home,” Haynes wrote with a smiley face, along with a picture of himself with what could either be blood or lipstick smeared all over his mouth. “So excited.”

Haynes is set to join the FX hit for its most timely season ever, as theme will be a political one, based on the 2016 election.

“It’s very scary and very fun and very…topical,” Murphy exclusively told E! News about season seven. “Anybody who voted in the last election will very much enjoy what it’s about.”

“I think people literally think Sarah Paulson is playing Hillary Clinton,” he recently told us. “And I wanted to clarify that that is not true. Horror Story is always about allegory, so the election is allegory. It’s our jumping off point. It is about the election we just went through and what happened on that night and the fallout of that night, which to many people, from all sides of the camps is a horror story. And you know, that show is always so fun when it’s about the zeitgeist and what we’re doing now.”

While Clinton and Trump will be part of the season, actors will not be playing them.

Haynes is set to join returning AHS stars Sarah Paulson and Evan Petersalong with new stars Billie Lourd and Billy Eichner for the politically charged outing of the hit anthology series, which has also been renewed for seasons 8 and 9.

While no premiere date for season seven has been yet, Murphy said fans can expect to see it sooner rather than later.  “It’s going to debut earlier than it did before—debut around Labor Day, because I like having it done, sort of by Halloween.”

American Horror Story will return later this year on FX.