Collins: There’s no nobility in a sucker punch

Although many are reluctant to admit it, boxing fans, by and large, are a bloodthirsty lot. How could it be otherwise? Whether by craft or crudity, the objective of the sport is to inflict bodily harm on another human being.

But even in such a brutal undertaking as prizefighting, there are limits, certain actions that are considered beyond the pale.

The sucker punch is one of them. It has been that way from the start, even back in the bare-knuckle era, when throwing your opponent to the ground and falling on top of him was permissible. Even kids know a sucker punch is cheating.

An early case of some note took place on a sunny July day in 1835, when William “Bendigo” Thompson squared off with Ben Caunt in a field behind the Appleby House, a secluded roadside tavern near Nottingham, England.

Caunt was much bigger than Thompson, outweighing him by approximately 45 pounds, but Thompson was a superior athlete, quick, agile and, in the parlance of the day, as slippery as goose grease.

Throughout the fight Thompson connected with bruising punches to Caunt’s head and body and then pretended to slip and dropped to one knee, ending the round on his own terms. Going down on purpose was against the rules, but much like today’s basketball players angling for a foul shot, it’s hard to prove if a fall is real or fake. And Thompson was an early master of the art.

Utterly frustrated by Thompson’s evasive tactics and verbal insults, Caunt coldcocked his antagonist during the 30-second rest period at the end of the 22nd round. Thompson was sitting on the knee of one of his cornermen, as was the custom of the day, when “Big Ben” hit him full force, knocking him and the cornerman over backward.

Caunt was immediately disqualified, and Thompson was declared the winner.

Jose Uzcategui, middle, had been disqualified for punching Andre Dirrell after the bell sounded when Dirrell’s uncle and co-trainer, Leon Lawson, right, went to Uzcategui’s corner and sucker punched him. Provided by Showtime

It had already been an inauspicious evening for Uzcategui. A few minutes earlier, he had been disqualified for knocking out Andre Dirrell with a left hook that landed a split second after the bell rang to end the eighth round. It was a borderline call, but referee Bill Clancy awarded the fight to Dirrell, who was deemed unfit to continue.

Uzcategui was standing in his corner awaiting the official decision when Dirrell’s uncle and trainer, Leon Lawson Jr., approached. It appeared that he was going to speak with Uzcategui’s cornermen, who were standing on the ring apron and leaning over the ropes. 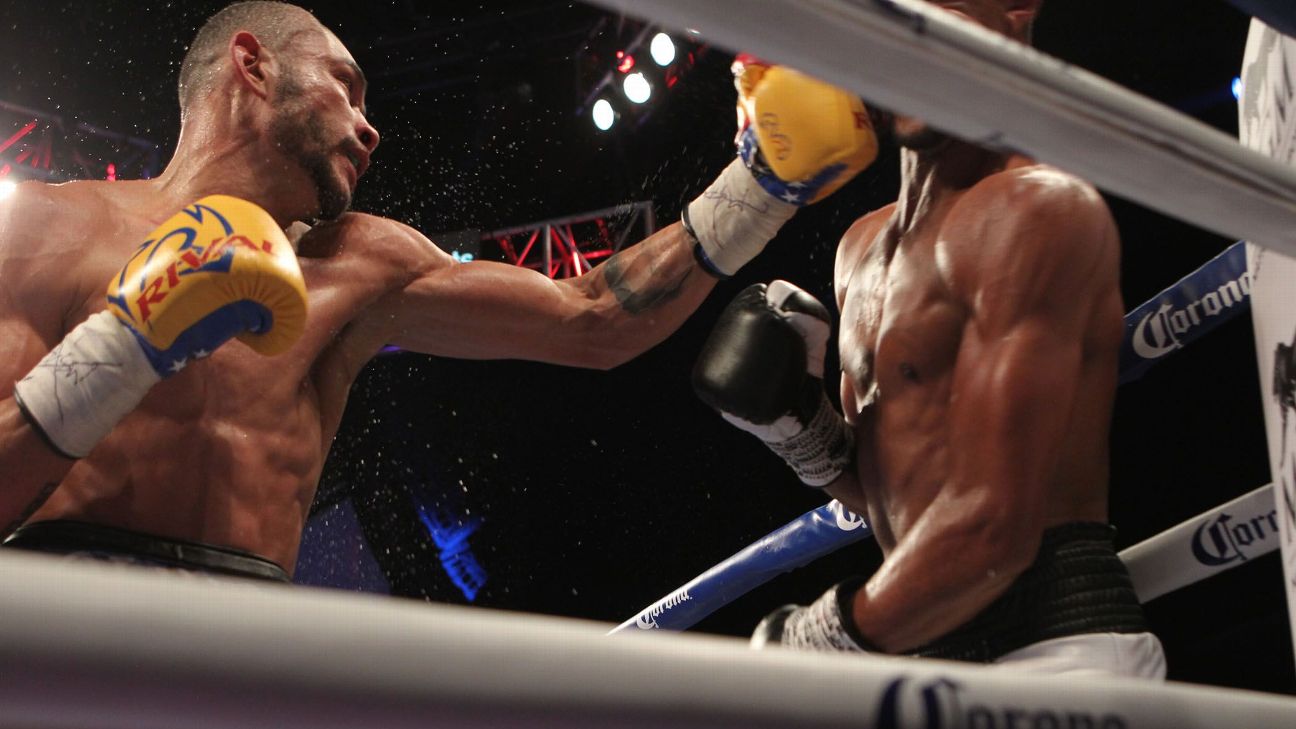 Jose Uzcategui gets disqualified for a late punch that knocks Andre Dirrell to the canvas. Dirrell gets up and appears to make amends with Uzcategui; however, Dirrell’s uncle, Leon Lawson, punches Uzcategui in the face. Watch

Suddenly, Lawson turned toward Uzcategui, who was looking in another direction with his hands at his sides, and threw a left hook that landed flush on the side of Uzcategui’s face. It was one of those “no he didn’t” moments, followed by outrage at such a cowardly attack.

In the confusion that ensued, Lawson left the ring and slipped out of the building. He has been charged with first- and second-degree assault but remains at large.

Many noted that the incident was eerily similar to James “The Harlem Hammer” Butler’s despicable behavior after losing a 10-round decision to Richard Grant in November 2001, a nightmare scenario with ominous overtones.

After the decision was announced, Butler, his gloves already removed, walked toward the winner with his hand extended for what looked like the customary postfight handshake. But instead of a handshake, Grant was the recipient of a scandalous sucker punch.

Grant collapsed and lay on the ring floor, blood oozing from his mouth. It was a stomach-churning sight, one that accentuated the monstrous nature of Butler’s craven attack. The punch had dislocated Grant’s jaw and lacerated his tongue.

Richard Grant, above, was sucker punched by James Butler in the ring shortly after Grant won their fight by unanimous decision in 2001. Butler was arrested and sentenced to four months in prison. James Keivom/Getty Images

There was no slipping away for Butler. The show at Manhattan’s Roseland Ballroom was a fundraiser for the Twin Tower Fund, and roughly 500 policemen and firemen were in attendance. Butler was arrested as he left the ring, convicted of assault and served four months in Riker’s Island.

Tragically, the occurrence foreshadowed an even worse event. After being released from prison, Butler moved to California, where Sam Kellerman, the 29-year-old brother of broadcaster Max Kellerman, allowed the troubled boxer to stay with him on a temporary basis (Max Kellerman now works for ESPN).

In October 2004, Butler murdered Sam Kellerman in the apartment they shared. After he was apprehended, Butler confessed and was sentenced to 29 years behind bars.

Butler is a particularly nasty case, but flaws can be found even at the highest level. Former heavyweight champion Riddick Bowe was the perpetrator of a pair of sucker-punch episodes that took place back-to-back in 1994.

In his first fight after losing the title to Evander Holyfield, Bowe fought Buster Mathis Jr. in Atlantic City. Mathis proved an uncooperative target, but a steady barrage from Bowe convinced Mathis to seek refuge by taking a knee in the fourth round, whereupon Bowe clobbered him with a right to the head that ended the fight.

Referee Arthur Mercante would have been well within his rights to disqualify Bowe, but after huddling with New Jersey commissioner Larry Hazzard, Mercante rule it a no contest. At the time, it was shrugged off as a questionable call. But what happened at a news conference for Bowes’ next fight indicated that the Mathis foul might have been more than an isolated, heat-of-battle slipup.

Bowe and Larry Donald were standing at the dais, neither looking aggressive, when suddenly Bowe bounced a combination off Donald’s face. To make matters worse, Donald’s hands were behind his back when Bowe chose to let him have it.

Bowe won a unanimous decision, but after the fight he was served legal papers in connection with a civil suit filed against him in Los Angeles Superior Court.

Bernard Hopkins, left, shoved Ronald “Winky” Wright in the face during the official weigh-in for their middleweight title fight in 2007. Jae C. Hong/AP

In similar high-profile incidents, Marco Antonio Barrera sucker punched Erik Morales at a news conference before their second fight, in June 2002, and Bernard Hopkins smacked Winky Wright at the weigh-in for their July 2007 bout. It’s not as rare an occurrence as you might think.

The motivation for these breaches of protocol fall into numerous categories of various culpability. Some, as with Uzcategui’s final punch against Dirrell, are just a matter of timing, usually with no premeditation involved.

Frustration, however, is often a major factor. It certainly was for Ben Caunt and many who followed in his footsteps.

Prefight tension and a bitter rivalry momentarily pushed Barrera over the edge. Bowe’s ego was having trouble coming to grips with being a former champion, and it brought out the nasty side of his character.

Then there are the fake rumbles, staged to attract customers. But that’s the show biz side of boxing.

To better understand the roots of the phenomena and why the sucker punch is one of boxing’s cardinal sins, we have to go back to the beginning, back before Caunt and Thompson battled behind the Appleby House.

The rise of prizefighting in England, a country imbued with a martial tradition, began in the first decade of the 18th century. Originally, it was seen by many as a better way of settling disputes than deadly duels with a sword or pistol, and as such, it had a code of conduct.

Even among the lower classes that populated boxing’s ranks and made up the largest part of its audience, there was an instinctive sense of fair play. Yes, it was a vicious and often illegal business, but cheating was frowned upon, and not only because large amounts of money were wagered on the outcome.

From the 18th century to today, when boxers say it’s not about the money, they are lying. It’s always about the money. Every time. But there’s something else, too, something money can’t buy.

From the journeyman’s pride in going the distance to a world champion holding a belt above his or her head, it’s about self-respect and knowing you’ve given your best and fought with honor.

That might sound corny, but it’s true. Ask any fighter who has thrown his last punch and spent his last dollar. What they did in the ring will always be who they are.

That will never change. Boxing has to celebrate bravery and pride in an honest effort. For that is, after all, what gives the sport a measure of nobility. And there’s no nobility in a sucker punch.