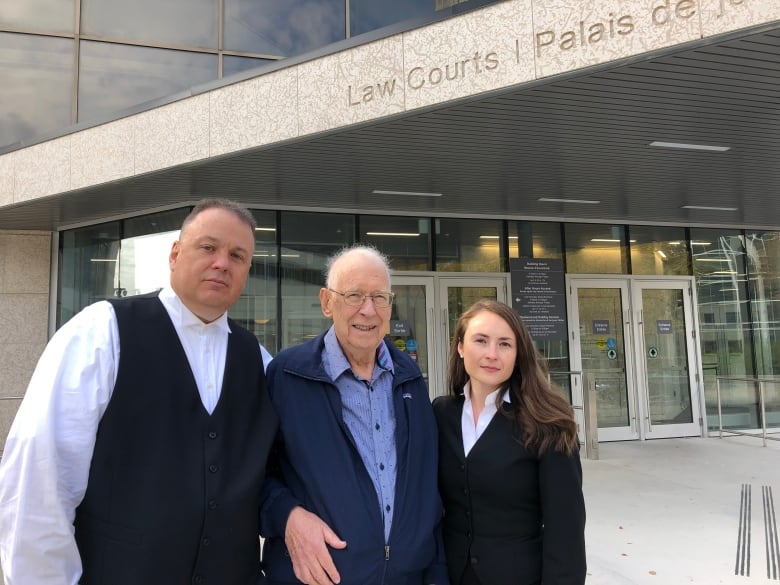 Jim Garwood says he’s hoping a civil court ruling will convince police to reopen an investigation into the death of his 87-year-old mother, whose body was found in the basement of her Winnipeg home in 2004.

Monday’s decision in Manitoba Court of King’s Bench is the result of a civil lawsuit filed by Garwood and is the culmination of his 15-year struggle for justice in the death of his mother, Jessie Garwood.

Police originally investigated the death but no charges were ever laid.

Jim Garwood filed a lawsuit in 2019 claiming damages against his former step-daughter, Catherine Johnson — the person who discovered Jessie Garwood’s body in the basement, with injuries such as blunt force head trauma, lacerations, broken ribs, a fractured arm, and wounds to the backs of her hands.

The claim alleged Johnson caused Jessie’s death and that it was not an accident.

Johnson failed to show up at court for the civil trial on Monday.

In his decision, Justice Theodor Bock noted that Johnson had been served documents and would have known the trial was starting and that she needed to attend.

Justice Bock said he accepted as truth the statement of claim filed by Jim Garwood.

“It’s a relief that this case has finally come to a conclusion,” Garwood said after the hearing. “I’m relieved.

“It’s taken a toll on me,” he said of the whole ordeal.

In a statement of defence Johnson filed in January 2020, she said she “had nothing to do with” the death.

She also claimed in that document that the plaintiff engaged in “harassment and vindictive action” in pursuing the lawsuit.

The judge awarded monetary damages to Garwood to be paid by Johnson, which will include an amount under the Fatal Accidents Act for loss of companionship, plus other damages such as expert fees, legal fees, and interest costs.

Garwood’s lawyer Jamie Kagan said the award of damages will add up to roughly $150,000.

“We were able to find the defendant responsible for the death of Jessie Garwood. She was deemed to have caused the death and has been held financially responsible now for the loss of her life,” Kagan said after the court hearing.

In the years following his mother’s death in 2004, Jim Garwood became suspicious about the way she died. He did his own investigating and hired forensic experts to help.

The undetermined death of Jessie Garwood

Affidavits by numerous experts and investigators were filed as evidence in the civil lawsuit.

The statement of claim filed by Garwood alleged the defendant, Johnson, caused the death by “pushing Jessie down the basement stairs of the home” and/or “striking or otherwise physically assaulting Jessie.”

Garwood expressed dissatisfaction with the way the police and the Crown handled the case over the years, and said he hopes the judge’s civil decision will lead to a criminal prosecution in the case.

“How anybody could see the photographs of the mess that was in the basement, blood all over the place, as an accident, is astounding,” Garwood said outside court.

His lawyer Kagan also said he hopes the verdict will lead to the case being reconsidered.

“Hopefully, it’ll cause the police and the Crown to reconsider what took place,” Kagan said, noting the “judge has looked at the evidence and found it to be compelling.”