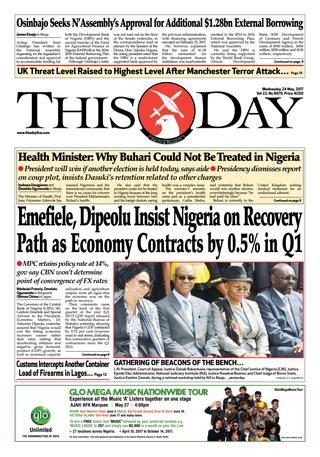 The President, Chartered Institute of Bankers of Nigeria, Prof. Segun Ajibola, has outlined national integration, policy planning and implementation, as well as citizen mobilisation as key elements on the path to the country’s economic growth.

Ajibola submitted that national integration and successful policy planning and implementation were inseparable.

He said, “Nigeria as a country has been estimated to have over 250 ethnic groups each with its own expectations and desires from the national government. I wish to therefore state that national integration is predicated on the mobilisation of the citizenry just as it is enhanced through appropriate economic policy.”

He spoke in Lagos at the CIBN annual lecture with the theme, ‘National integration, citizenship and the challenge of economic policymaking’

The lecture, which attracted operators in the financial industry, academia, organised private sector, among others, emphasised the importance of the integration of citizens to economic development of the country.

According to him, the public lecture seeks to draw attention to topical economic and political issues that could assist policymakers to be effective.

Ogbu, who is a professor of Economics and Director, Institute for Development Studies, University of Nigeria, Nsukka, was the guest speaker at the event.

He added that there was no substitute to inclusive and political institutions in the journey of transformation, adding that nations had risen and fallen on account of actions that denied citizens stake in their country.

Ogbu noted that the nature of value allocation in the country had created a situation where poverty had held many of the citizens in servitude.

He said, “One can analyse every obstacle to Nigeria’s development within the framework of the absence of national integration and the contestation among the dominant ethnic groups.

“Healthy competition is useful but competition for national assets on the basis of ethnic solidarity inevitably retards the socio-economic progress of a nation.”

Like the Singaporean nationalist leader, late Lee Khan Yew, the professor of Economics said it was imperative for Nigeria’s political leaders to build a country where every citizen had stake in its prosperity.