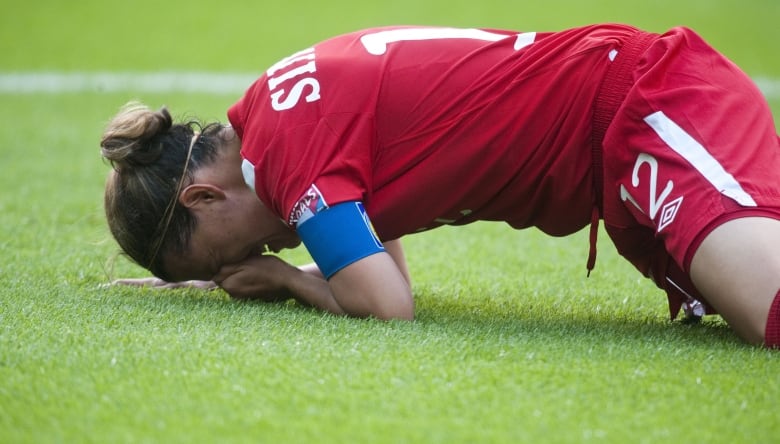 If the total skill, determination and grit shown by Christine Sinclair over her career could be distilled into a single goal, it’s this one.

With 73,680 rabid German fans cheering on their side at the opening game of the FIFA World Cup in June 2011, the Canadians were up against it. But Sinclair, never intimidated by the moment, was awarded a free kick near the German net in the 82nd minute.

In a memorable strike, she curled the ball past the German goalkeeper and silenced the fans inside Berlin’s Olympic Stadium.

What many watching that day didn’t know was earlier in the match, Sinclair had broken her nose after taking an elbow to the face. She didn’t flinch.

“As soon as it happened, I knew my nose was broken,” she said after the match.

It turned out to be the only goal Canada would score during that tournament. Sinclair had to get her nose reset after the game and wore a protective shield the remainder of the event.

Canada lost all three games and there was disappointment. But onward Sinclair pushed. Better days were coming — and so, too, was change.

Throughout many losses — and more recently, many wins — Sinclair has always shown up for the biggest, brightest and most important moments on the pitch for Canada.

Sinclair has been part of the Canadian women’s national team for 21 years. Her 187 goals (the most of any international player), 304 caps and now third Olympic medal put Sinclair in a league of her own.

But she never wanted the spotlight.

Sinclair has only ever led by example.

“Finally got to the top of the mountain,” she said after winning the gold medal at the Tokyo Olympics on Friday.

“It’s the best we can do. It’s the most we can do as a national team. Three podiums in a row. We’ve inspired a lot of kids,” she said.

Her greatness shouldn’t be defined by scoring all those goals, playing all those games and finally winning a gold medal when the world was watching.

A strong advocate for women in sport, Sinclair, moments after winning gold, wanted to talk about the future of the sport in the country.

“The next step is we have to get a professional league and teams in Canada,” she told CBC Sports.

“I think it’s unacceptable that the Olympic champions don’t have a professional environment in Canada. That’s the next task.”

Sinclair’s legacy should be defined by inspiring a nation and women across Canada and the world to play soccer.

And showing up when no one was watching.

Twenty-one years ago, Sinclair made her national team debut, at just 16 years old, during the 2000 Algarve Cup.

Sinclair, now 38, got her first taste of soccer when she was four years old as a member of the Burnaby Burna Bees, the local team. She was hooked.

Six years after her national team debut, Sinclair was named Canada’s top female soccer player. Since then, she has won just about everything there is to win: four professional championships with three different teams; the Lou Marsh Trophy; the Bobbie Rosenfeld Award; inducted into Canada’s Walk of Fame; appointed an officer of the Order of Canada; Canadian player of the year 14 times.

But it was never about a gold medal, accolades, the most-goals scored, endless awards or the spotlight for Christine Sinclair.

WATCH | Karina Leblanc in what makes Christine Sinclair so special:

Christine Sinclair is the ultimate leader by creating space for other players to make plays and be the best they can be. 0:47

For the greatest soccer player ever to come from Canada, it was about a simple love for the game and inspiring those around her.

Make no mistake, Sinclair loves to win — and she’s finally on top of the sporting world. But this was always about so much more than the game for her.

And any one of her teammates to take the pitch with her fully understood what this meant to Sinclair.

That’s why, just days before their golden moment in Japan after defeating the United States, Sinclair’s teammates gave her space after their celebration.

WATCH | Sinclair after win against U.S.: ‘A little revenge is nice’:

Canadian soccer great Christine Sinclair wore her heart on her sleeve after beating the United States and advancing to the Olympic final. 1:31

Teammates had just huddled around one another, danced wildly and soaked up the moment. But when that joyous scene calmed, Sinclair remained.

She was lying on the Kashima pitch. Alone. Absorbing the weight of the moment.

“We finally did it,” she said after the game.

Sinclair, after dozens and dozens of battles lost against the Americans, finally won. She’s endured more than anyone else in the Canadian women’s soccer program.

It was the brightest, greatest win of them all for her. But it took a lot of losing, a lot of searching and perseverance, to get to gold.

Sinclair was inspired to play the game at the highest level while watching the 1999 FIFA Women’s World Cup in the United States.

WATCH | A gold-medal win years in the making:

A musical montage featuring the Canadian women’s national soccer team’s long path to victory in the Olympic gold-medal game, set to the Arkells song Years in the Making. 1:50

She then got to inspire at home 16 years later when the World Cup was hosted in Canada.

And who will ever forget that penalty kick goal in stoppage time against China to give the Canadians the win — sending more than 50,000 fans inside Edmonton’s Commonwealth Stadium into a frenzy.

And now there’s reason to cheer again all those years later.