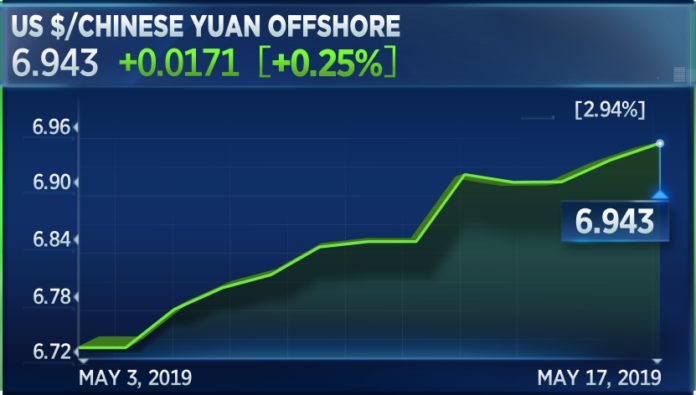 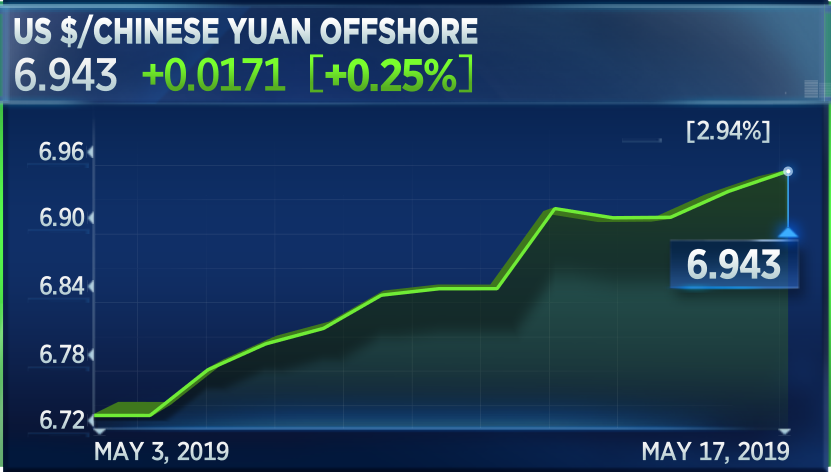 China’s currency has been an important barometer for progress in U.S.-Chinese trade talks, and right now it’s signaling that things aren’t going well.

The question is whether that signal is intentional, and whether Chinese officials will step in to prevent the yuan from reaching a key psychological low of 7 to the dollar. That level has become a line in the sand for markets around the world, and if broken, it could trigger a negative reaction in risk markets globally, as investors move to price in a bigger economic impact from a longer, more contentious trade war.

The yuan has been fairly stable this year, as the U.S. and China carried on trade talks. But since President Donald Trump tweeted about new tariffs May 5, the onshore yuan or CNY, has lost 2.7% against the U.S. dollar.

“Obviously, the trade shock we’re now discussing is a full blown trade war, so it’s obviously a very serious scenario. Then we have this negotiations period, where it could be averted and that doesn’t seem to be very good at all,” said Jens Nordvig, CEO of Exante Data. “It’s also unclear whether the Chinese officials want to fight hard to keep the currency stable. That’s a question mark that came in today.”

The onshore currency, or CNH, which trades in Hong Kong and is more impacted by international traders, hit a high of 6.945, while the onshore yuan, more controlled by the central bank, was just above 6.91 Friday. Nordvig said unlike other sessions, there was no sign Friday that the People’s Bank of China tried to stem the decline.

Also unclear was whether it was an intentional action, and Chinese officials were responding to trade tensions and the U.S. action this week blocking telecom firm Huawei from buying U.S. components.

CNBC reported Friday that trade talks between the two countries appear to have stalled, and the next round of talks have not yet been scheduled.

A weaker yuan has been a source of friction between China and the U.S. for years. Trump, in the past, had accused China of intentionally weakening its currency, hurting the U.S. as a result. If China does allow its currency to weaken, its exports would become more attractive, but strategists say Beijing would then worry about capital flight and it would probably not want to risk that.

“The market is testing the central bank’s resolve to defend the 7 lever,” said Marc Chandler, global market strategist at Bannockburn Global Forex. “They’ll do in a couple of ways, partly through intervention, partly through draining liquidity, raising the cost of being short the Chinese currency. They can do this in the domestic money market and in the domestic Hong Kong market.”

Nordvig said the message the yuan is sending is not like the positive comments about the trade talks that U.S. officials like Treasury Secretary Steve Mnuchin or White House top economist Larry Kudlow have made.

“It looks like they’re not even being invited to China. If there’s no talks ahead of Trump and [President Xi Jinping] meeting in Osaka, then the meeting becomes binary and very risky,” said Nordvig. Trump and Xi are expected to meet on the sidelines of the G-20 meeting June 28.

“It would be very different if Mnuchin makes some progress on some chapters here in the next couple of weeks. If that doesn’t happen we come close to the cliff,” said Nordvig, adding the question is whether Chinese officials are going to hold the currency up.”

Strategists say the yuan current weakness is due to a strengthening dollar and trade war concerns, which in turn are prodding Chinese authorities to consider more monetary and fiscal policy moves.

“It’s selling off on expectations of easier monetary policy and apparently no trade talks. China says we haven’t invited the U.S. back,” said Chandler, adding he expects the currency to challenge the 7 level soon.

“I think we’ll test it. We’ll test Chinese resolve. It will become more of a concern that it will be an inflection point if the CNY or CNH get to 7. It will have a ripple effect on the markets. It will be another source of instability. Another rubicon has been crossed,” he said.

Adam Cole, head of G-10 foreign exchange strategy at RBC, said reports that unnamed Chinese officials said the PBOC would not let the currency trade through 7 suggests that such a move won’t happen soon. But he said the yuan could breach those levels in the future.

“Longer term, with the dollar generally going up against everything, I think that constraint becomes nonbinding,” Cole said. He said the dollar’s rise has to do with monetary policy positioning, cyclicality and the fact that the U.S. economy looks stronger than the rest of the world.

China has been reducing its holdings of Treasurys, which some say could be a warning to the U.S. But Cole said he does not believe China, the largest holder of Treasurys, would bail out of the market in a big way.

“That’s an ongoing concern. Like most people,we think the risk of China going through a sudden liquidation and allocation out of Treasurys is unlikely. That would be a case of cutting off your nose to spite your face, given how much China has to lose,” he said.