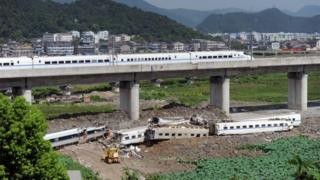 China’s fleet of high-speed trains is set once again to become the world’s fastest.

The top speed of the Fuxing or “rejuvenation” bullet trains was capped at 300km/h (186mph) in 2011 following two crashes that killed 40 people.

From next week, some of the trains will once again be allowed to run at a higher speed of about 350 km/h.

The higher maximum speed should cut about an hour off the journey time between Beijing and Shanghai.

By 21 September, seven of China’s bullet trains will be permitted to travel at the increased maximum speed.

To mark the return of the higher-speed service, the trains have been named “Fuxing” – Chinese for rejuvenation – in line with a national government slogan and development plan.

All the trains have been fitted with an improved monitoring system that will slow and stop the trains automatically in the event of an emergency.

The nation’s rail operator is believed to be looking into ways to upgrade track to let the engines run even faster – perhaps at speeds approaching 400km/h. China is believed to have about 19,960km (12,400 miles) of high-speed rail tracks.

The 2011 crashes of the high-speed trains led to a state investigation into the railways ministry which uncovered widespread corruption.