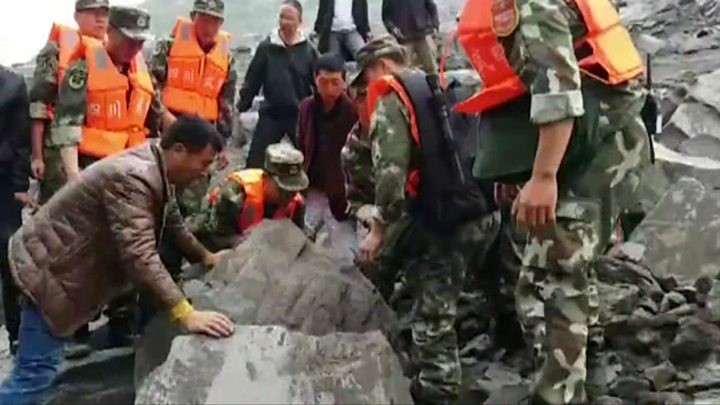 More than 120 people are missing after a landslide in Sichuan province in south-western China, state media say.

About 40 homes were destroyed in Xinmo village in Maoxian county, after the side of a mountain collapsed at about 06:00 local time (22:00 GMT Friday).

A couple and a baby were rescued and taken to hospital after teams of workers used ropes to move large rocks, AFP news agency reports, citing local authorities.

Qiao Dashuai told CCTV the baby had woken them and when they came to the door of their home they were swept away by water. He said his parents and other relatives were still missing.

An earlier toll of 141 missing people has now been revised down by state media.

Local police told state broadcaster CCTV a lack of vegetation in the area had made the landslide worse.

Roads in the county were closed on Saturday to all traffic except emergency services, the news agency said.

Landslides are a regular danger in mountainous regions of China, especially during heavy rains.