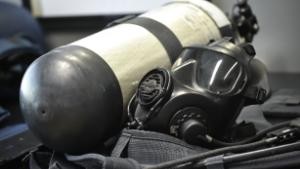 International chemical weapons experts have finally inspected the site of a suspected attack near Damascus which caused an international crisis.

The team from the Organisation for the Prohibition of Chemical Weapons (OPCW) travelled to the town of Douma and collected samples and other items.

More than 40 people are said to have died on 7 April. The joint military response by the US, UK and France followed a war of words with Russia, Syria’s main military ally.

The delay in the OPCW visit encouraged the proliferation of rival theories and accusations ricocheted between the various capitals and across the internet, BBC Arab Affairs editor Sebastian Usher says.

What happened on Saturday?

In a press release, the OPCW said its team had visited one of the two sites reportedly bombed in Douma on 7 April.

The unspecified samples will be sent to the OPCW Laboratory in Rijswijk, a suburb of The Hague, and then analysed by designated labs, the agency said.

Other information and “materials” have also been collected by the inspectors, it said.

An ITV News correspondent recorded the return of the OPCW convoy to Damascus.

OPCW convoy arrives back in Damascus after getting into Douma today to investigate chemical attack #Syria #OPCW pic.twitter.com/Y6MmKxbSBy

The nine-strong team had been waiting for a week in the Syrian capital for clearance to visit the town.

They had been due to enter the town on Wednesday but the visit was delayed after a UN risk assessment team came under fire while checking the sites on Tuesday.

Western officials fear that evidence of the alleged double chemical attack may have been tampered with.

However, important traces of toxic chemicals would probably still be present in the environment and in the remains of victims, Alastair Hay, professor of environmental toxicology at the University of Leeds, told AFP news agency.

“Nerve agents like sarin can be present in the environment for many weeks after use and particularly if you look near the site where a weapon has exploded,” he said.

“Autopsy samples, if available, will provide invaluable evidence and nerve agents can be found in many organs.”

Why has it taken so long?

Douma was constantly under attack during the recent Russian-backed Syrian offensive to drive rebels out of areas near Damascus and is still littered with the debris of war, making any inspection potentially hazardous.

The rebels withdrew under a deal with the Russian military just after 7 April.

While there is suspicion that efforts may have been made to remove forensic evidence of chemical weapons, foreign journalists have already visited the town.

In a statement, the Russian foreign ministry accused the OPCW of itself taking too long to inspect the suspected attack sites.

What happened on 7 April?

On the day of the suspected chemical attack, Douma was still under the control of the Jaish al-Islam group, the last rebel bastion in the Eastern Ghouta region outside Damascus.

Thousands of people were sheltering in basements from government bombardment, when two bombs filled with chemicals were allegedly dropped several hours apart on two separate locations.

The US, UK and France say that, based on open-source information and their own intelligence, they are confident chlorine and possibly a nerve agent were used.

The Syrian government and Russia deny chemical weapons were used and say evidence was fabricated.

While the Syrian government denies having ever used chemical weapons, experts from the UN and the OPCW have ascribed four chemical attacks to the government during the civil war.

These include an attack on the rebel-held town of Khan Sheikhoun just over a year ago that involved the nerve agent Sarin. More than 80 people are said to have died in that attack.