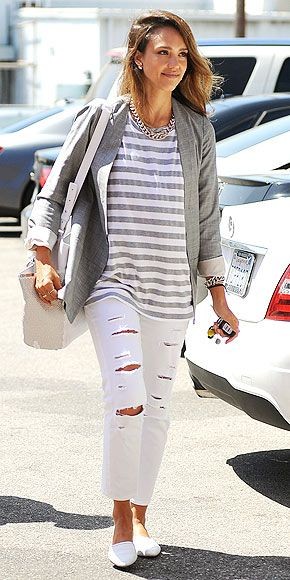 Last month, the mom of two announced via Instagram that she and husband Cash Warren were expecting a third child and were “officially going to be outnumbered”—and since the big announcement, the Sin City star-turned-Honest Company businesswoman has been slaying the pregnancy style game. After two previous pregnancies, it’s pretty clear that the fashionable star knows how to dress her growing baby bump.

In the past three weeks, the 36-year-old has had quite a whirlwind time. She attended an Honest Company party in the Hamptons, went on a family vacation to Hawaii (and even had dinner with Bill Clinton) and hit up The Tonight Show with Jimmy Fallon.

For each event, every ensemble is more fab than the next. From feminine floral dresses to off-the-shoulder frocks and menswear-inspired jean ensembles, the brunette is all about having fun during her third pregnancy.

On Friday, the expecting mom, who has daughters Haven, 5, and 9-year-old Honor, donned a fab floral frock with thigh-high boots and told Jimmy Fallon that the duo are planning on naming their third born with an “H” name as well. 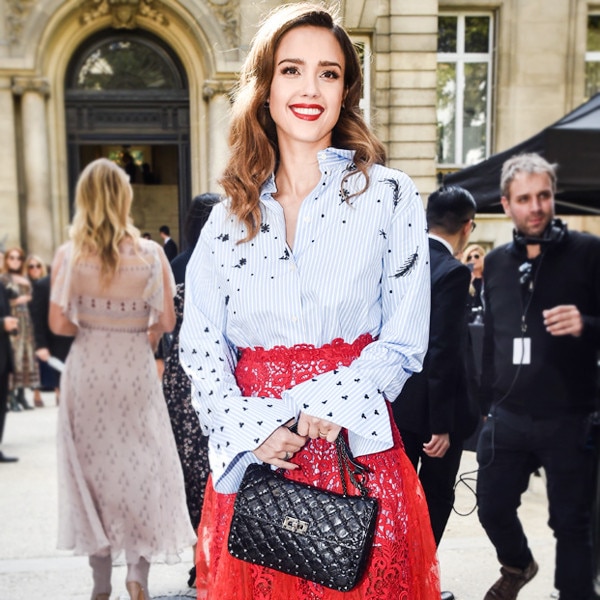 The brunette went for a patterned dress and thigh-high boots for her appearance on The Tonight Show on Aug. 4.

The pregnant mama donned an off-the-shoulder dress with Rachel Zoe and Molly Sims as the trio attend the Honest Company and The GREAT’s event called The GREAT Adventure on Aug. 5, 2017 in East Hampton, New York.

Opting for a white linen romper for her family photo, the star wrote, “We had an epic family vacay @fsoahu #hawaii thank you to everyone at the Four Seasons for treating us like family,” on July 24.

While on vacation in Hawaii, Jessica donned a tropical frock for a dinner with husband Cash Warren and former President Bill Clinton on July 17. She captioned the photo, “#aboutlastnight #epicdinner.”

The soon-to-be mom-of-three announced the big news on Instagram on July 17 and donned an off-the-shoulder black frock for the reveal.

The pink lady all smiles when out and about in New York City on Aug. 3.