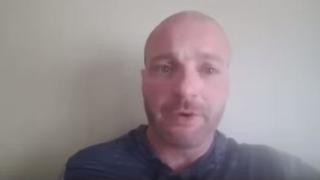 A white supremacist wanted by police over his role in violent clashes at a rally in Charlottesville, Virginia, has handed himself in.

He appeared in a Vice News documentary about the 11 August demonstration.

He has admitted pepper-spraying a counter-protester but says he did so in self-defence, according to US media.

Mr Cantwell and dozens of others took part in a torch-lit parade through the University of Virginia shouting racist, anti-Semitic and neo-Nazi slogans.

The far-right march had been organised to protest against the proposed removal of a statue of General Robert E Lee, who commanded the pro-slavery Confederate forces during the American Civil War.

But it descended into violence after the rally’s supporters were confronted by anti-racism groups. A car driven by a man linked to white supremacists later ploughed through a crowd of counter-protesters and killed Heather Heyer.

Mr Cantwell, who is seen in the Vice documentary denouncing Jews and calling for an “ethno-state”, appeared in a tearful YouTube video on 16 August asking for guidance about what to do in response to a police warrant against him.

On Wednesday, University of Virginia police said he had handed himself in and was taken into custody in Lynchburg.

Contacted by the Associated Press, Mr Cantwell said he pepper-sprayed a counter-protester “because my only other option was knocking out his teeth”.

Police said he was being held on three charges – two counts of the illegal use of tear gas or other gases and one count of malicious bodily injury with a “caustic substance”. If convicted, he could face several years in prison.