Chantek, the orangutan who used sign language, dies at 39 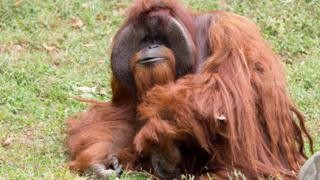 An orangutan who was one of the first apes to learn sign language has died in Atlanta, Georgia, aged 39.

Chantek lived with an anthropologist in Tennessee for about nine years and learned to clean his room, make and use tools and memorise the route to a fast-food restaurant.

He spent his later years in Zoo Atlanta where he was treated for heart disease.

Zoo officials said he had “an engaging personality” and would be deeply missed.

In a statement, Zoo Atlanta said that at 39, Chantek was one of the oldest male orangutans in North American zoos.

His cause of death was not yet known, it said, but vets had been treating him for progressive heart disease. Orangutans are considered geriatric after the age of about 35, the zoo added.

Chantek was born at the Yerkes National Primate Research Center in Georgia and was sent to live with anthropologist Lyn Miles at the University of Tennessee at Chattanooga.

A 2014 documentary called “The Ape Who Went to College” showed that Chantek had learned various skills there including cleaning his room and directing a driving route from the university to a restaurant.

The orangutan was also one of only a few apes who could communicate using American Sign Language.

Zoo Atlanta said that Chantek frequently used sign language to communicate with keepers but “he was shy about signing with individuals he did not know and often chose forms of communication which are more typical of orangutans, such as vocalisations and unique hand gestures”.

“Chantek will be deeply missed by his family here at Zoo Atlanta,” said Hayley Murphy, vice president of the zoo’s animal divisions.

“He had such a unique and engaging personality and special ways of relating to and communicating with those who knew him best. It has been our privilege to have had him with us for 20 years.”