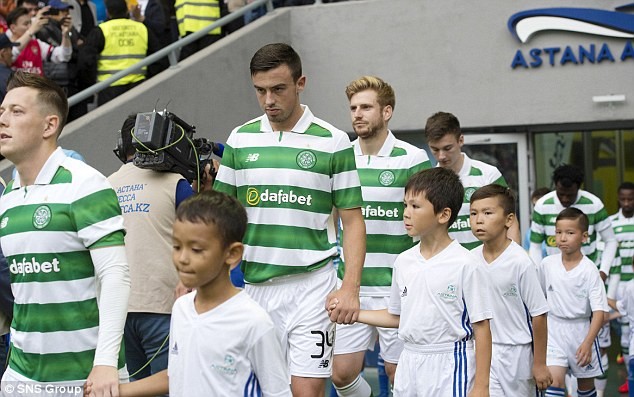 Celtic all but booked their Champions League group stage berth by thumping Kazakh champions Astana in the play-off first leg.

Tom Rogic created the opener when he drove into the box and lifted a ball into the area that Evgeni Postnikov could only divert into his own net.

Sinclair raced clear to add the second and doubled his tally after the break.

The sides meet again on Tuesday in Kazakhstan for the second leg, which now looks a formality for the Scottish champions, who knocked Astana out of the competition in the third qualifying round last term.

Fortune favoured Celtic at critical moments in this one, but it was a measure of the ruthless instincts of Brendan Rodgers’ side that they took full advantage.

Astana set up to try to thwart the home side, who found it tough to pass through a packed midfield and defence in the opening stages.

Forrest and Kieran Tierney – playing very high and wide to try to stretch the game and allow Sinclair to play infield and closer to Griffiths – provided a couple of dangerous crosses, but Celtic needed to be patient.

They were rewarded when Rogic, who was casually effective, showed quick feet to carry the ball past two defenders and into the penalty area. He clipped it across goal, where Astana centre-back Postnikov lunged to clear but fired the ball into the empty net.

The goal bolstered Celtic, but they still had to survive a scare when Postnikov powerfully headed Serikzhan Muzhikov’s corner wide from a central area.

The home side were not to be swayed, though, and when a tackle deep inside Astana’s half inadvertently sent the ball beyond the visitors’ defence, Sinclair ran through from an offside position and expertly steered the ball beyond goalkeeper Aleksandr Mokin.

Astana had been disciplined for the opening part of the first half, but Celtic’s advantage scrambled their senses after the break. They might have griped that when Rogic and Yuri Logvinenko clashed heads just inside the Astana half play should have stopped. The referee played advantage, since it had been a foul against the Celtic midfielder, and Griffiths combined with Sinclair for the latter to drill home a third goal.

Rogic and Yuri Logvinenko were substituted, with the Astana man having his head bandaged before he was booked and replaced. Celtic were in full command by then.

In the build-up to the game the focus had been on whether or not Griffiths would be fit enough to lead the line and provide Celtic’s goal threat. He sliced wide when sent through on goal, but his impact on the first leg was one of creativity. Having played a vital role in Sinclair’s second, he set up the fourth goal of the night for Forrest by shrewdly holding on to the ball before playing it into the winger’s path.

As with all three earlier strikes, Forrest punished the meek goalkeeping of Mokin, lashing the ball past him and into the far corner.

Griffiths could not be contained and his shot was directed into the net by Shitov to round of the evening’s scoring.

Astana have an excellent record at home, but this tie is beyond them now. Celtic showed their cutting edge, but they also have the experience and game management to complete their progress into the group stage of the Champions League.