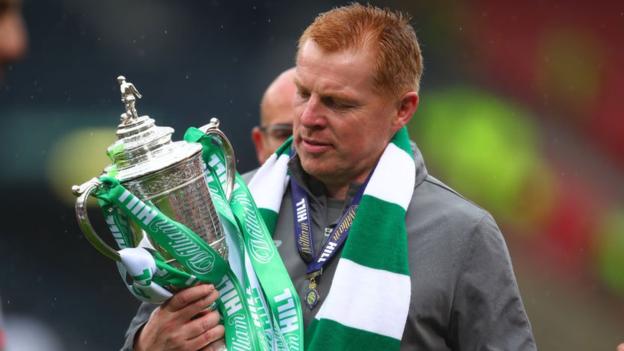 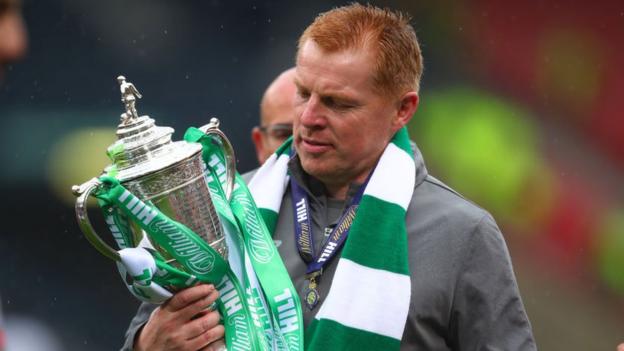 Celtic continue to come up with all answers.

A treble treble secured on Saturday at Hampden not in the bells-and-whistles fashion they’d have wanted, but in a hard grind against Hearts that might have, in some ways, given them even more satisfaction. A battle can be more rewarding than a cakewalk at times. Celtic had to dig deep to pile another layer on to their history mountain.

On the occasion of their treble treble it’s probably fitting to talk about the Celtic pantheon and the current team’s place in that hall of fame. On Saturday, Scott Brown joined Jimmy Johnstone on 19 trophies won as a Celtic man, Mikael Lusting joined Bertie Auld on 16, Tom Rogic joined Willie Wallace on 11.

This generation has won nine consecutive trophies and 27 consecutive cup ties, they’ve scored 338 goals in 141 domestic games over the last three seasons. They have the best players and the greatest financial clout by far, but other Celtic teams and and other Rangers teams have had similar privileges in the past and they haven’t done what this group have done.

The consistency is remarkable, particularly in the cup competitions where over the course of three seasons you’d expect one team to catch them on a given day. Nobody has. Hearts came close, but couldn’t get it done.

After the first treble some said that it might never be done again. After the second, many said that it was unmatchable. Now that they’ve won a third the best advice would be to stop second-guessing about what they’re capable of. A quadruple treble? Would anybody bet big money against it?

More than one issue was settled at Hampden. A trophy was won and then Celtic made up their mind about who they want as permanent manager. After nine weeks of mulling it over, the board have now decided that they want Neil Lennon to continue.

The way this unfolded was bizarre, reflective, rightly or wrongly, of a club that was not exactly meticulous in their decision-making. Perhaps Celtic have been scouring Europe these past months talking to people in an attempt to give the fans what they want – a Brendan Rodgers-esque character to shoo away whatever challenge Rangers, or anybody else, may lay down next season – but they’ve ended up offering it to the man who was under their nose all the time.

Lawwell couldn’t state that Lennon had actually accepted the offer – he will, but he hadn’t by the time Lawwell went public – and couldn’t reveal how long the contract on the table was for. The first the players knew of it was when they saw the announcement on Twitter. That was one of the stranger things. How could it be that casual punters on social media could hear the news at the same time as the guys with the jerseys on their backs and the trophy in their hands? The immortals, as Lennon called them.

After nine weeks of mulling it over, Lawwell gave the impression that this was a spur-of-the-moment thing, a hastily-convened get-together of himself, the majority shareholder Dermot Desmond, the chairman Ian Bankier and other key members of the board in the wake an emotional and historic victory.

‘Why wait until after final?’

Also, why not delay the announcement until you can tell the Celtic fans that Lennon has actually accepted it? There was something faintly ridiculous, and thoroughly un-Lawwell, about the chief executive staging an impromptu press conference without having all the information he needed to have.

Three years ago, Celtic announced the news that Rodgers was joining the club as Ronny Deila’s replacement. It came via a clear statement. Rodgers was joining on a one-year rolling contract and would be officially unveiled three days later at a ceremony at Celtic Park that was open to all.

Appropriate arrangements were made. Thousands turned up to welcome Rodgers and it all went off beautifully. Those were, of course, unique circumstances and you wouldn’t expect a repeat for Lennon, but the stark difference here is in planning. In short, they had their ducks in a row in 2016. On Saturday, their ducks were all over the place, quacking madly in the confusion.

The image of the players sitting in the dressing room checking their phones and only then learning that Lennon had been offered the job is a surreal one. On a day when the club achieved a massive feat on the pitch they were doing a passable impersonation of Ragball Rovers off it.

Celtic folk, in large numbers, would have preferred somebody else in the manager’s chair for next season. Now that he’s been appointed they’ll rally around Lennon in the hope that recruitment will bring a new energy to a team that has too often in recent months looked tired and uninspiring.

It was mostly undying spirit, and a little luck, that got them past a ferociously stubborn Hearts at Hampden rather than moments of brilliance from their go-to men.

To stand still is to move backwards in professional sport and Celtic are in need of a reset in the summer even allowing for the treble treble. Not only do they have too many players but too many players not doing nearly enough to justify the money they’re costing the club. Loan men are leaving and their own loan men are returning, some of them with zero chance of making an impact.

Lennon will be doing a significant stock take before the assault for nine in a row begins. He could cull a dozen with ease. As much as they revere him, some Celtic fans will fear that Lennon’s appointment reflects a lack of intent on the part of the board, an illustration that they’re not going to push the boat out in the evolution of the playing squad in a way they might have been forced to do had a high-profile, and demanding, manager been lured to Celtic Park.

Blasting a hole in that theory is one of the many things Lennon has on his to-do list. Getting the job was his dream. He’s done that now. Galvanising the operation is now the task ahead of him.