Canadians show solidarity with Ukraine through rallies, calls for support 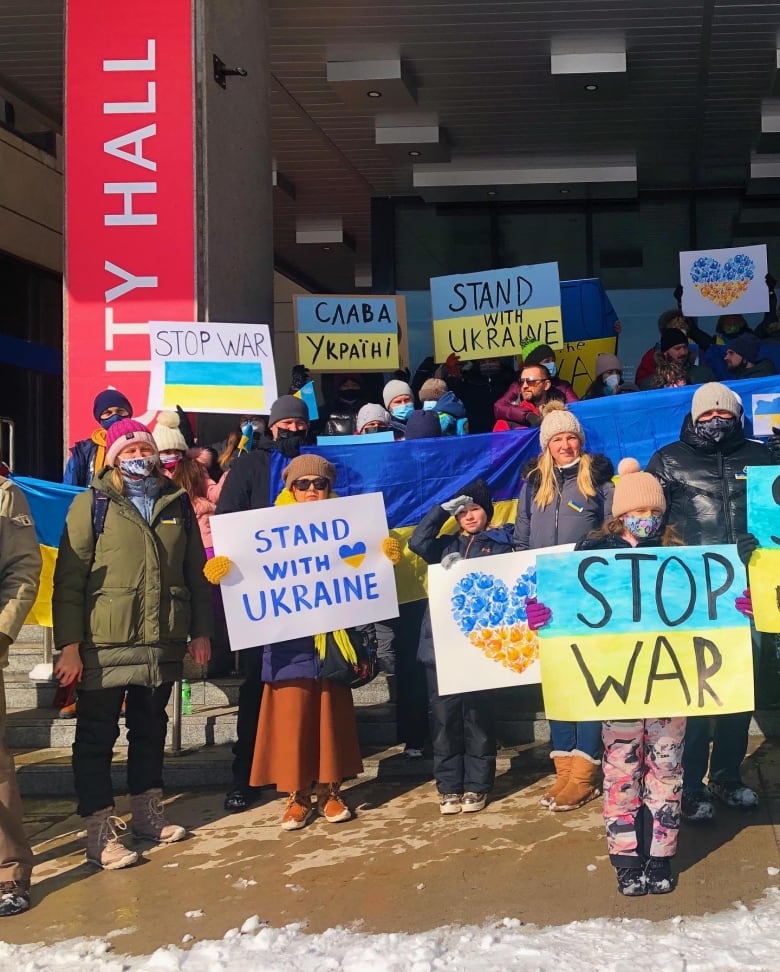 Canadians continue to show support for Ukraine and its fierce and urgent battle against a Russian invasion that has tossed life there into sudden chaos.

Saturday marked the third day of Russia’s wide-ranging invasion of Ukraine — a move that has prompted condemnation by many world leaders and triggered a raft of sanctions.

It has also prompted people across Canada to demonstrate their solidarity with the people of Ukraine by attending various rallies and demonstrations against the invasion, which began on Thursday.

Keeping watch ‘so far from Ukraine’

Hundreds of people gathered outside the Vancouver Art Gallery on Saturday afternoon to show their support for the Ukrainian people. Many in the crowd chanted “Stand with Ukraine!” in unison.

In Eastern Canada, another gathering in Saint John saw scores of people meet at City Hall on Saturday to take part in a rally that was organized by local members of the Ukrainian community.

Their signs urged people to stand with Ukraine and to stop the conflict the democratic nation in eastern Europe has been forced to confront.

Rally organizer Oksana Posatska said all had gathered “to make our voices heard loud and clear” and to call for support for Ukraine.

“We are so far from Ukraine,” said Posatska, who used to live in the Ukrainian city of Lviv. “But we can ask for help.”

At a Halifax rally that drew hundreds of people on Saturday, Nadia Timoshenko said her family had roots in Ukraine and she still had distant relatives living there.

“I think it’s important for Ukrainians and all humans to come together and stand against this,” Timoshenko told CBC News.

“This shouldn’t happen in Ukraine or anywhere in the world.”

A Saturday rally in St. John’s saw members of the local Ukrainian community speak about how the conflict’s has impacted them. Hundreds attended the event, including local politicians.

It ended with the Ukrainian flag being raised in front of St. John’s City Hall, and the singing of the Ukrainian national anthem.

The ongoing demonstrations taking place in Canada echo the sentiments of those opposing the war around the globe.

“I just want to say: ‘[Russian President Vladimir] Putin stop this, regain your sanity,'” said Hiroshi Sawada, when speaking to Reuters at a protest in Tokyo on Saturday.

There have also been people in Russia protesting against the war since the invasion started.

‘Hard for us to be here’

In Ottawa, dozens of protesters wearing the thick blue and yellow stripes of the Ukrainian flag gathered Saturday afternoon on a snowy sidewalk outside the Russian Embassy.

Carrying signs full of anger toward both Russia and Putin, the protesters — some originally from Kyiv, with family members still in the Ukrainian capital — chanted as passing cars honked in solidarity.

“It is hard for us to be here and not to be able to help them in any way, [other than] with our own love and support,” said protester Irena Abramova. “I’m afraid that my people will die.”

A candlelight vigil was also held Saturday evening outside the Ukrainian Embassy in Ottawa.

In other provinces, a group of demonstrators gathered outside the Russian Consulate in Montreal on Saturday.

And in Winnipeg, an estimated 2,000 people turned out for a rally organized by the Ukrainian Canadian Congress outside the Manitoba legislature.

“We want the world to not just look upon us and say, ‘We’re sorry this is happening to you,'” said attendee Halyna Shtoyko, who came to Canada from Ukraine as a teenager more than 20 years ago. “We want the help, all the help that we can get.”

Fears for loved ones

Varvara Shmygalova now lives in Toronto, but previously lived in Kyiv. She has loved ones still living in Ukraine and the peril they are facing is constantly on her mind — particularly with the shelling of buildings near the apartment where her grandparents live in the Ukrainian capital.

“It’s really awful and heartbreaking,” she told CBC News Network on Saturday morning. “All of that is very, very scary.”

Shmygalova thanked all the people in Canada offering support for Ukraine and urged them to continue to do so.

On Saturday, Ukraine’s health minister said that at least 198 Ukrainians have been killed and more than 1,000 others have been wounded.

And more than 150,000 Ukrainian refugees have crossed into neighbouring countries since the launch of the invasion on Thursday, the UN High Commissioner for Refugees Filippo Grandi tweeted Saturday.

The invasion came after a prolonged Russian troop buildup along Ukraine’s borders and a series of escalating warnings from Western leaders that such an action was increasingly likely.