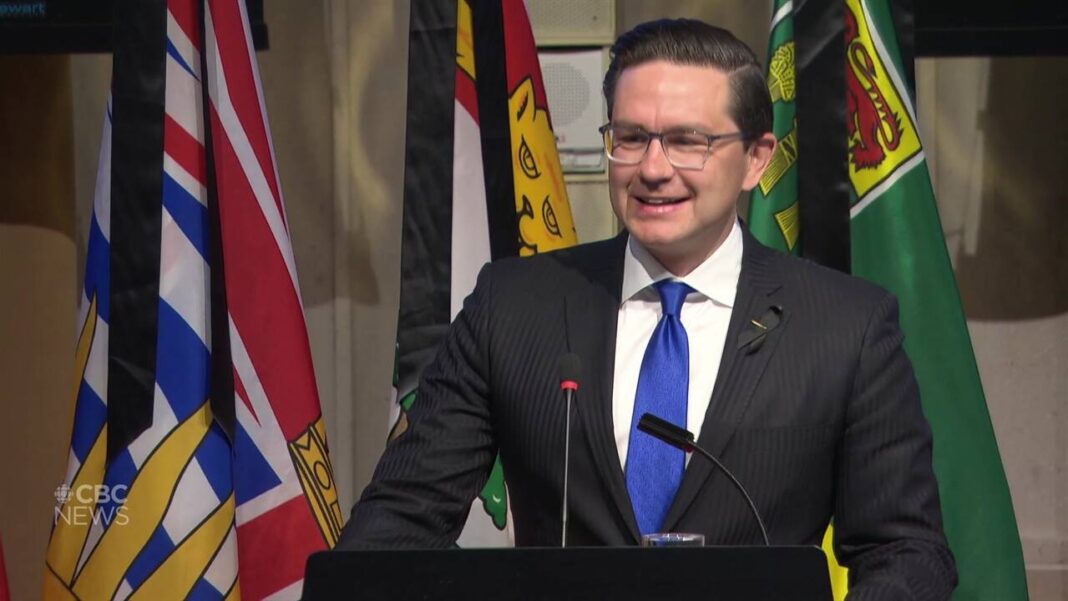 In his first speech to caucus since winning the party’s top job, Conservative Leader Pierre Poilievre said Monday his focus at the helm will be on holding the government to account for its perceived failings on the economy and inflation.

Poilievre — who spoke for roughly 10 minutes, sometimes to thunderous applause from the assembled MPs and senators — said Prime Minister Justin Trudeau and the governing Liberals are out of touch with the struggles of working people.

He said that, as the son of a single mother and the adoptive son of two school teachers, he comes from “humble origins” and can sympathize with the plight of Canadians struggling to get by.

While there may be an early sign in dropping fuel prices that year-over-year inflation has peaked, the costs of housing and other goods remain elevated. For the last several months, consumer price increases have continued to exceed the year-over-year increase in hourly wages.

Poilievre said during his campaign for the leadership that he met young people living in their parents’ basements because of eye-popping home prices, blue collar workers who can’t afford new boots for their jobs and single mothers who have cut back on the food they feed their families because of surging grocery prices.

“Canadians are hurting and it is our job to transform that hurt into hope. That is my mission,” Poilievre said.

Poilievre called on Trudeau to stop increases to payroll taxes like Employment Insurance (EI) premiums and contributions to the Canada Pension Plan.

He also said it was reckless for the government to push through sizable hikes to the federal carbon tax — the levy on fuels will increase from $50 a tonne of emissions this year to $170 a tonne by 2030 — when people are “already suffering.”

“I’m issuing a challenge to Justin Trudeau today. If you really care, commit today that there will be no new tax increases on workers, on seniors. None,” Poilievre said.

“My commitment back is, to the prime minister and his radical woke coalition with the NDP: we will fight tooth and nail to stop the coalition from introducing any new taxes.” 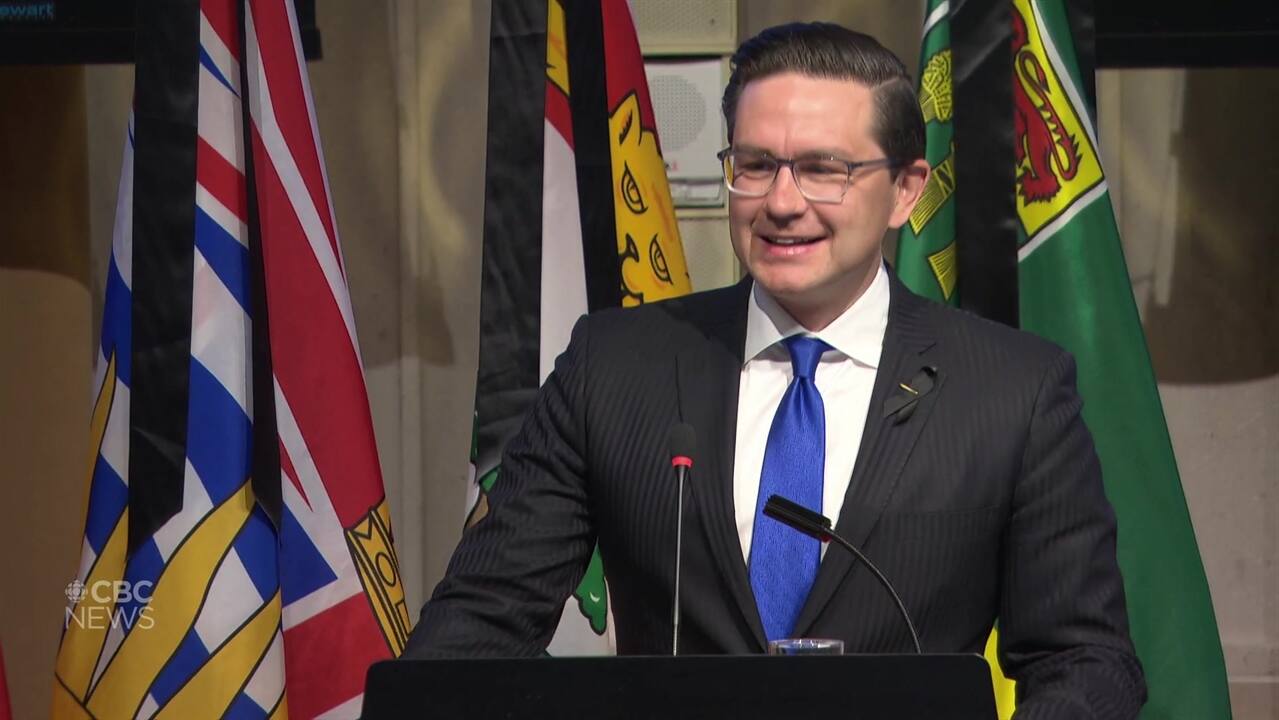 Poilievre won the party’s leadership race on Saturday with 68 per cent of the vote. He says he will fight against inflation and the current government’s rising deficit.

During his campaign for the leadership, Poilievre tried to tie the government’s pandemic-era spending to inflation. With more money in circulation, the MP argued, the cost of goods has increased to meet surging demand.

The government has rejected these claims, saying the COVID-19 pandemic and the war in Ukraine are largely to blame for recent price spikes.

Poilievre said that, if he’s elected prime minister, he’ll introduce legislation to force the federal government to offset every dollar of new spending with a cut to something else — a program he’s calling a “pay-as-you-go” approach to budgeting.

Poilievre’s plan is to essentially cap federal spending so it doesn’t go much higher than it is now.

The legislation, if passed, would require the government to find money for new measures within existing budgets, rather than increasing debt and taxes to cover new costs.

“We know the problem — the cost of government is driving up the cost of living,” he said, pointing to the nearly half-trillion added to the federal debt in recent years during a global health crisis. “The government should find a way to save one dollar for any new dollar spent. That’s the proposal we’re going to make.”

Poilievre, a populist figure, said he wants to lead a country with “small government and big citizens … [where] the state is the servant and the people are the masters.”

Poilievre, who has a reputation as an attack dog in party politics, brought his wife and one of his children to the platform ahead of his Monday morning speech.

He warmly embraced his wife, Ana, who gave a well-received introduction to her husband at Saturday’s leadership event. He also held his baby son, Cruz, who turned one year old today, and blew out the candles on a small birthday cake as a smiling caucus looked on.

While Poilievre had the backing of much of the caucus during his leadership run, he extended a hand to those MPs and senators who supported other candidates during the sometimes nasty race.

“No matter the candidates you support throughout the leadership race, no matter if you stayed neutral. I am grateful for your contributions. We’re all together and we’re all part of the great Conservative family,” he said.

Quebec MP Gérard Deltell, who backed former Quebec premier Jean Charest in the leadership contest, said he and others are ready to unite behind Poilievre.

“I think the message is Mr. Poilievre got a strong result on the first round so now he’s the leader of every Conservative member of this party,” he said.

“Inflation is the big issue of Canadians right now — we have to address it and Mr. Poilievre is the one to do that,” he added. Detell continued to distance himself from Poilievre’s campaign pledge to “fire” the Bank of Canada governor, however: “That’s not where I stand on that.”

Alberta MP Michelle Rempel Garner, who supported Brampton, Ont. Mayor Patrick Brown for leader before he was blocked from running, said she’s happy with the clear result because it brings the party’s revolving roster of leaders to a halt.

“I am relieved our war of succession is over and Mr. Poilievre received a crushing mandate and I think it’s going to provide some much-needed stability to our caucus at a time when we need to focus, as the opposition, on holding the government to account,” she said. “It’s back to work for us.”

“We’re not as divided as you’d think,” he said, calling Poilievre a “consensus builder” who will work with some of the MPs who bristled at his style during the leadership race.

At the Liberal Party’s caucus retreat in New Brunswick on Monday, a number of MPs said the party has to pivot to counter a new Conservative leader who mobilized hundreds of thousands of Canadians and captured a stunning 70 per cent of the popular vote in the party’s leadership race.

Some said they would like to see the party adopt more centrist positions to counter Poilievre.

“We must return to a federal centre, centre-right party,” said one MP, who spoke on the condition that they not be identified. “We need a government that is down-to-earth and less woke.”