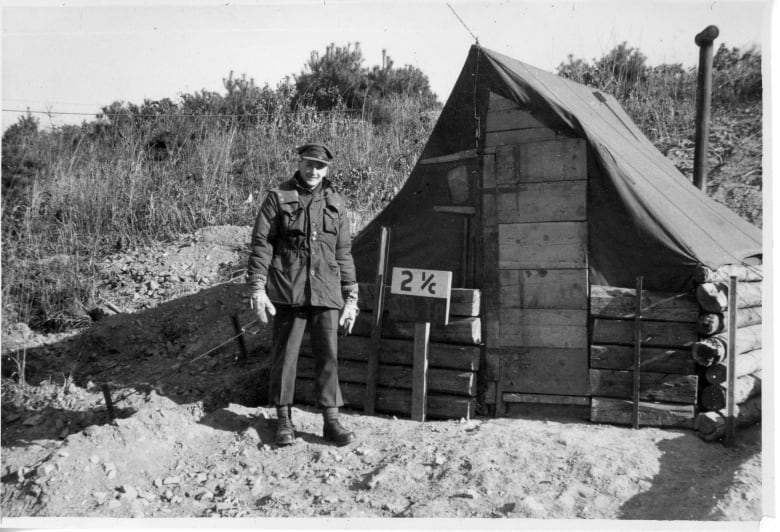 The moment from the Korean War that sticks with retired lieutenant-colonel Brian Simons happened at the beginning of the Battle of Hill 355 — a now largely forgotten struggle in an often overlooked war.

A young signaller attached to the Royal Canadian Regiment, Simons — a newly minted lieutenant at the time — was up on the rocky hillside at a battalion outpost when Chinese artillery and mortars opened up with their first deafening barrage.

“It was noisy,” Simons, 92, told CBC News in an interview from his home in North Vancouver. “We were firing artillery and mortars as well, and machine guns and so on.

“During the day there was a heck of a lot of noise, but when the Chinese mortars landed, of course, not only was it noisy, but some of our boys were hurt and killed.”

On his way back to headquarters, shells whistled overhead and pounded the hilltop, kicking up great gasps of dirt and dust, turning the hillside a chalky white.

‘It looked like the whole top of the hill exploded’

Other soldiers, speaking years after the battle, swore the Chinese bombardment was so intense it shaved a foot off the top of the summit.

“It looked like the whole top of the hill exploded at once,” said former lance corporal Gordon Bennett, who was with a company of soldiers that had just come off the hill and gone into reserve behind the lines.

Simons made his way down the hill under fire and ran into another young officer, just arrived from Canada, waiting for a jeep. They struck up a conversation before he continued on.

On duty at the headquarters half an hour later, the phone rang. Simons learned a mortar had landed at the spot where he’d been standing and the young officer, only a few hours at the front, had been mortally wounded in the head.

“It was upsetting,” Simons said.

It took place at what the South Koreans call Kowang San, 40 kilometres north of Seoul. It represented a personal milestone for Simons — his first time in major combat.

Historians see the battle as an important turning point in the war, one that helped shape the perception of the conflict down the decades.

For Simons, the experience was far more vivid and personal than anything a history text could convey.

Clearing bunkers in the dark

He recalled the tension and apprehension at headquarters as the bombardment left the positions around B Company, 1st Battalion, Royal Canadian Regiment (RCR) in shambles. Soldiers on the hilltop, dazed and rattled, faced waves of Chinese soldiers who clawed over the top and through the communication trenches.

The Canadians, clustered in small groups and platoons, slipped away — or in some cases played dead — as night fell.

“I guess you could say that we were hopeful that our activities would deter the Chinese but we didn’t know how many there were or what they had in the way of weapons or anything else,” Simons said.

Two other RCR companies counterattacked overnight — Bennett was among them. He recalled how Canadian artillery delivered punishing belows to the Chinese, who had no opportunity to dig in.

“Whether it was the middle of the night or the middle of the day, it doesn’t really matter,” he said. “It’s all still a frightening proposition and we didn’t know exactly what to expect, but we were expecting to fight and visibility wasn’t any worse than ever is there. I mean, we could see where we’re going and could see our target.

“We didn’t want to start throwing grenades into bunkers because we didn’t know who was in them. Might have been our guys.”

When the sun came up, Bennett noticed wires all over the place and thought at first they were damaged trench telephone lines. Many of them, he said, were hastily set booby traps which failed to detonate as the Canadians tugged at the wires.

The battle was the second bloodiest day in Korea for the Canadian Army — 18 killed, 35 wounded and 14 taken prisoner.

It was a watershed moment in the war, said one historian.

“The Battle of Hill 355 and October ’52 marked an important new phase.” said Andrew Burtch of the Canadian War Museum.

No longer were Chinese and United Nations forces punching through each other’s lines in dramatic advances and withdrawals. The war had settled into a bitter, grinding stalemate, with the same patches of ground trading hands at a steady cost in blood and lives.

It’s the phase of the war people remember the most — futile, violent, costly battles for faceless, numbered hills.

“I think both the Chinese and the UN were trying to bleed each other white in this timeframe to gain the most advantage at the at the negotiating table,” said Burtch, referring to the negotiations that eventually produced an armistice — but no final peace — between the two Koreas in the summer of 1953.

Burtch said the Battle of Hill 355 also represented a turning point on the home front — the point at which the Canadian public started losing interest in the Korean campaign.

“People were still fighting, being wounded, dying, taken prisoner, taking prisoners, in places like 355,” he said, “And so even as the war was ongoing, the people at home, of course, didn’t really have a great understanding of Korea.”

And that, he said, was one of the factors that contributed to how quickly Korea faded from the public consciousness. Other factors included the ongoing Cold War in Europe and overall war fatigue.

The soldiers who survived Korea came home to no parades and little recognition, unlike troops from the First and Second World Wars.

And for years, they had to fight the stigma of being the men and women of a forgotten war.