19 years ago, St. John’s was denied a chance to be part of NBA history — and these fans haven’t forgotten 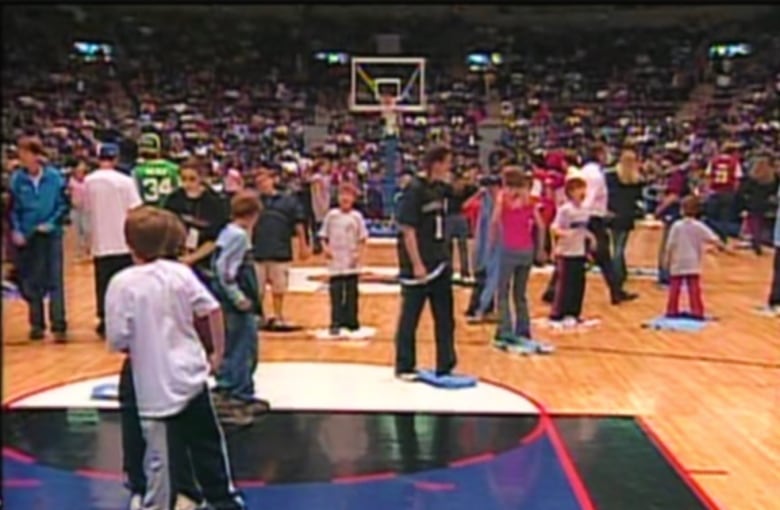 On a night in late October 2003, thousands of people crowded into a new arena in downtown St. John’s to watch NBA history: the rookie debut of LeBron James — then an 18-year-old rookie but today a global icon with multiple championships and MVP titles.

Instead, fans were left heartbroken — and 19 years later, some want to see the fulfilment of a promise made on that disappointing night.

On Oct. 23, 2003, the Toronto Raptors and Cleveland Cavaliers descended on Newfoundland and Labrador’s capital for an exhibition matchup, one that was supposed to be the first basketball game played at a newly constructed arena — the former Mile One Centre — and James’s NBA debut.

“You get a chance to see LeBron James’s debut, what’s not to love about that?” said Matthew Brake, who carpooled that night with high school friends from Pasadena — 650 kilometres down the Trans-Canada Highway, on Newfoundland’s west coast. They booked a hotel room in the city and waited eagerly from the upper rows of Mile One for tip off.

Things didn’t go quite as planned.

Watch the video above to see archival video from this legendary sports fiasco.

There was a delay, Brake remembers, then another delay and another, as fans sat and watched NBA stars shoot a few buckets during the pre-game warmup.

Notable talent in the lineup that night, besides James, included Vince Carter, Jalen Rose and another rookie looking to make a name for himself in the league: Chris Bosh, a future NBA Hall of Famer.

“There’s a bunch of kids on the floor with towels wiping up something. We didn’t know what was going on. As time passed, the players went away,” said Brake.

The court’s hardwood floor was soaked with moisture. The city was experiencing an atypically humid, late October day, and the body heat from thousands of excited fans in the sold-out arena didn’t help the situation.

Glen Grunwald, general manager of the Raptors at the time, was courtside as officials discussed what to do.

Play the game and risk injury to some of the biggest names and assets in the league? Or cancel and disappoint fans, some of whom, like Brake, had travelled from far outside the city just to catch a glimpse of NBA stars up close?

“It was a great vibe in the city and everyone was excited. It was a unique place, too, for the players to go. They didn’t know much about St. John’s or Newfoundland, so they were excited for that,” Grunwald told CBC News.

Unfortunately, Grunwald said, because of the condensation on the floor, the court wasn’t safe to play on.

“The air went out of the balloon kind of very slowly. Finally the NBA referees, who make those decisions about cancelling games, said, ‘I’m sorry, we can’t go forward with this game. We tried to clean it up but it just won’t work,'” he said.

Grunwald was handed a microphone and given the thankless task of delivering the bad news. For fans who were in attendance, it might be Grunwald’s speech announcing the cancellation, after a long walk to centre court, that they remember most.

“I felt awful because a lot of people came up to me after that and said, ‘Hey, I drove from Corner Brook … to come to this game,'” said Grunwald.

Boos rained down from rafters of Mile One. Some of the more unruly fans threw food onto the floor.

But in his devastating speech, Grunwald gave local fans some hope, with a promise that the Raptors would be back within two years.

“We had made that commitment to do that. Unfortunately after that season I got fired,” he said with a laugh.

“Things kind of fell by the wayside and it didn’t happen.”

But Grunwald’s plans to return didn’t end when his tenure with the Raptors did. Some years later, while at the helm of the New York Knicks, he had plans in place to bring that club to St. John’s.

“I had the Washington Wizards lined up to play the Knicks in the 2014 pre-season in St. John’s and unfortunately I got fired again,” he said, laughing again.

“The Wizards didn’t want to go forward after I got let go. If I could just keep a job, we’d get a game back there.”

That’s why Brake is spearheading the campaign #RaptorsToTheRock to bring an NBA game back to St. John’s next year, which will be the 20th anniversary of the game that never happened. The Raptors have been playing exhibition games in cities outside of Toronto this year.

Brake is using Twitter to reach whoever he can, including players who were at that game in October 2003, earning himself a response from Vince Carter, who said he remembers that night, and local basketball hero Carl English, who said he’s going to do what he can to help the cause.

“The Toronto Maple Leafs were here a couple of years ago, they did their training camp and pre-season game here,” said Brake. “There was nothing but positive things to say about it. Twenty years after the cancelled game seems like the perfect time to come back for a little bit of retribution.”

Grunwald said he would love to see a plan come together.

“It was a special day in a lot of ways. Both good and bad. It’s a good story in the sense that it’s legendary in terms of how it all came together and fell apart and who was involved,” he said.

“I really do hope the games can get going back out there again. It is complicated and things have to fall in place but I think the fans out there should let the Raptors know they still want the game.”