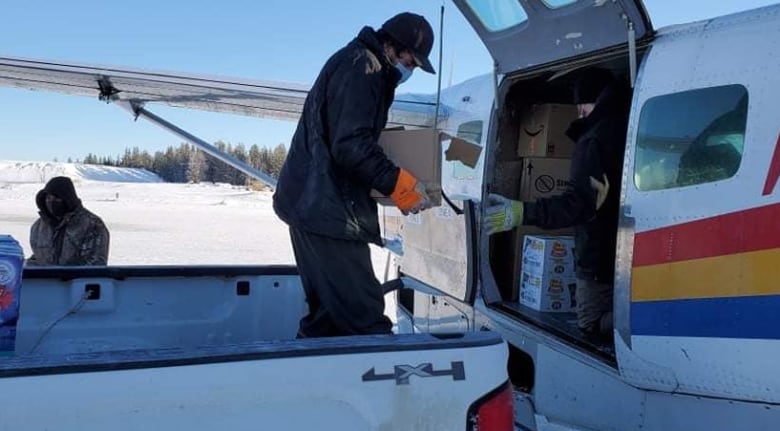 Four members of the Canadian Armed Forces have arrived at Bearskin Lake, a First Nation in northern Ontario where more than half of the population is infected with COVID-19.

Blair’s office said the Rangers will be in the community until at least Jan. 23, and more could be deployed in the coming days.

Roughly 460 people live in the remote community located 600 kilometres north of Thunder Bay, Ont. More than half have tested positive, and even more are in quarantine.

Chief Lefty Kamenawatamin said Sunday that as many as 60 households are isolating. Most homes are heated by wood stoves, he said. With temperatures sitting at about –30 C, firewood is an urgent need.

“We need a whole lot of supply of wood on a daily basis for each home,” said Kamenawatamin, who is isolating himself after someone in his household tested positive. With those temperatures, “it doesn’t take long for a house to be cold.”

The crisis has also taken an emotional toll, Kamenawatamin said.

Nearby First Nations have donated supplies, sending planes with items such as food, medicine and air purifiers.

Tania Cameron, a First Nations woman from Kenora, Ont., has raised about $26,000 for the Bearskin Lake effort. She said Sunday that she’s already sent about $19,000 worth of groceries and supplies.

Cameron said was motivated to help after her son tested positive for COVID-19. The federal government should have responded earlier to the outbreak in Bearskin Lake, she said.

“I don’t think this is going to be limited to Bearskin Lake,” Cameron said. “I understand leadership of all First Nations are doing their best to prepare for outbreaks in our communities.”

At Bearskin Lake, she said, “they’re running out of helpers.”

Sol Mamakwa, the MPP for Kiiwetinoong, said he believes that the federal government would have responded faster if it was another municipality in Ontario.

He travelled to Bearskin Lake during the outbreak, he said, and saw the lack of federal presence.

“When I went there, it was ghost town-like,” Mamakwa said. “It was kind of eerie where you see no children, no kids running around. I saw maybe 25 to 30 people my whole trip there. I was there about six, seven hours.

“The ones I was talking to, I know they were exhausted. They were tired, very emotional. I can see it in their eyes. I could hear it in their voices that they felt there was no end in sight.”

The province says it’s sent $40,000 “in COVID support” to the community and another $121,000 to help with the current outbreak. The Ministry of Health has also sent an additional 1,000 rapid testing devices.

The Ministry of Indigenous Affairs said in a statement on Sunday that it’s “providing support to address urgent gaps, such as the purchase of wood splitters to ensure community members who are in isolation have access to wood.

“Surge capacity funds are also being provided … to address transport of needed vehicles into the community, retrofitting of vehicles, rentals, charter fights for food and supplies, and/or supports for relief workers.”

Kamenawatamin said the community is about 80 per cent vaccinated, but he’s concerned about elders, infants and vulnerable people with chronic health conditions.

Cameron said she wanted to send the message that people care.