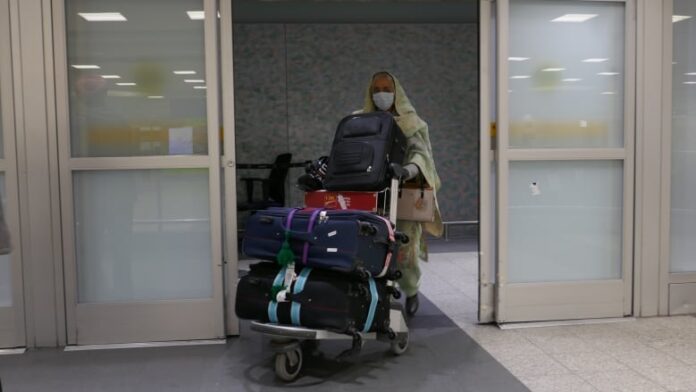 Canada has enlisted the help of nearly a dozen foreign airlines to bring home thousands of Canadians stranded abroad in remote mountain regions, on secluded islands and in locked-down countries that Canadian carriers can’t reach as the pandemic tightens its grip.

The federal government reports that after arranging transport home for about 25,000 people, it’s now addressing the last 20 per cent of outstanding cases of stranded travellers. But it still says it won’t be able to get everyone home before the pandemic itself ends.

“These last folks are going to be tough,” said Liberal MP Rob Oliphant, parliamentary secretary to the minister of foreign affairs.

“Most of them are small numbers of people, often in isolated or remote places. Some of them will be left there.”

Months-long effort to bring Canadians home from countries locked down because of the COVID-19 pandemic has entered final stages. 2:04

The repatriation effort is being spearheaded by Global Affairs Canada, which has completely retooled its operations to turn nearly every available employee into a full-time travel agent. Staffers who used to write ministerial briefing notes are now booking hotels, buses and flights.

The department, with the help of MPs, embassies and consular staff around the world, has returned more than 25,000 Canadians from 81 countries since the pandemic began.

International airlines were called in because, for a variety of logistical reasons, Canadian airlines couldn’t fly to some of the places where Canadians were stranded, such as the Philippines, India and some countries in Africa.

Some countries shut down their airspace. Others temporarily banned people from travelling to airports without government documentation.

While Canadian airlines — including Air Canada, Air Transat, WestJet and Sunwing — were involved in repatriation efforts, more than half of the Canadians brought home to date flew on foreign airlines, said Oliphant.

“I’ve never seen anything like this before,” he said. “It’s actually an overwhelming diplomatic success … The international airlines have been incredible. We would have not been able to bring tens of thousands home without their help.”

One of the problems facing Canadian airlines was a lack of landing rights in certain African countries. Ethiopian Airlines offered to criss-cross the continent collecting small numbers of Canadians stuck in ten countries, including Guinea, Cameroon and Sudan, said Global Affairs.

In the Philippines, where the government has temporarily forbidden travel between the islands to curb the spread of COVID-19, Philippine Airlines ran “sweeper flights” that stopped on various islands and gathered up Canadians.

In India, Qatar Airways is collecting the largest number of Canadians being repatriated from a single country. So far, 21 chartered Qatar Airways flights carrying more than 4,000 people have touched down in Toronto, Vancouver and Montreal.

Global Affairs said international airlines were key to getting access to countries where cross-border flights are dwindling and local travel restrictions remain in place.

“For effectiveness and efficiency, the government has in some cases worked with companies that already had an existing route and relationships on the ground,” said department spokesperson Katherine Cyr in a statement to CBC News.

Before the pandemic, for example, Air Canada had no problems with flying regularly to India — but on March 22, when India shut down its airspace, it became a logistical nightmare.

“Every country has isolation requirements,” said Oliphant. “The airlines and the unions have rest requirements and it became very difficult.”

As repatriation flights continue to land in Canada, the government is facing complaints about poor communication, hefty ticket prices and a lack of physical distancing onboard flights.

It cost Canadian Lokesh Puri’s family of four $12,000 to fly home from Mumbai in early April.

“The Canadian government could have done a better job,” said Puri. “If they really want to help, they could reduce the prices of these flights. It’s putting people in debt. I have to break one of my savings bonds to pay for this flight.”

Kanwer Taggar said he expected to see passengers spread out on his Qatar Airways flight from India on Tuesday.

“Three thousand dollars per person for a one-way ticket and no social distancing on the plane,” said Taggar. “It was fully loaded.”

‘Some of them will be left there’

The federal government says it’s offering $5,000 loans to help Canadians cover the costs of coming home from abroad. But these commercial flights are particularly expensive because they’re flying empty before they pick up their passengers, and because there are no first-class fees or last-minute bookings to subsidize the seats.

Global Affairs says it has paid over $147,000 to Canadian airlines to backstop the cost by paying for empty seats on planes. The department is doing the same for foreign airlines but says it does not know how much it has spent on them yet.

NDP foreign affairs critic Jack Harris said the repatriation effort hasn’t been as generous as it should be. He said the government should be subsidizing the cost of tickets for those experiencing extreme hardship and it’s making people jump through too many hoops to secure the loans.

“I don’t think there was enough flexibility,” said Harris. “People applying are finding it very difficult to get their loan approved.”

In some cases, he said, families are staying abroad until the price of flights drops.

Conservative transport critic Todd Doherty said he wants to know what the whole repatriation program will cost in the end. He said the aviation industry is hurting right now and he understands the daunting challenges involved in trying to get Canadians out of countries with travel restrictions in place.

“This is a difficult one,” he said. “The stories we’re hearing in some of these countries where people are seen as foreigners — they are fearing for their life because they are being seen as carriers of the virus.”

Thousands of Canadians in small groups are still stuck in different parts of the world. The federal government says that number isn’t large enough to justify sending chartered planes, so Canada is asking other countries if they have empty seats on flights and is offering in return to help repatriate their own citizens.

“Its always right at the end of the game you have some of the most challenging cases,” said Oliphant. “It’s like a marathon at times.”

Since the beginning of the crisis, Foreign Affairs Minister François-Philippe Champagne has said some Canadians will remain stranded for the pandemic’s duration — and that message hasn’t changed.

“Unfortunately, despite our very best efforts, it will most likely not be possible to ensure the return of all Canadians who wish to come home,” he said on April 2.

The government says it will help those stranded people shelter in place with consular support until the pandemic passes.