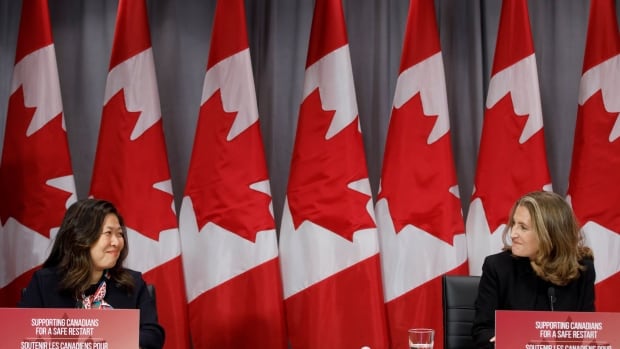 Deputy Prime Minister Chrystia Freeland has written to top U.S. senators threatening to suspend parts of the USMCA trade agreement and impose tariffs on American goods unless U.S. officials back away from a proposed tax credit for American-built electric vehicles.

“We are deeply concerned that certain provisions of the electric vehicle tax credits as proposed in the Build Back Better Act violate the United States’ obligations under the United States-Mexico-Canada Agreement,” Freeland and International Trade Minister Mary Ng say in the letter.

“The proposal is equivalent to a 34 per cent tariff on Canadian-assembled electric vehicles,” the letter says. “The proposal is a significant threat to the Canadian automotive industry and is a de facto abrogation of the USMCA.”

Congress is proposing sizeable tax credits worth up to $12,500 US to buyers of new electric vehicles — as long as those cars are manufactured by union workers in the U.S.

Experts agree the tax measure would deal a major blow to the Canadian automotive sector, which is trying to attract new investment as the industry transitions away from internal combustion engines.

In the letter addressed to Senate Majority Leader Charles Schumer and Senate Minority Leader Mitch McConnell — along with six other senators who sit on key Senate committees — Freeland and Ng point to the integrated nature of the North American automotive industry.

“We have been building cars together for over 50 years,” the letter says. “Canadian-assembled vehicles … contain approximately 50 per cent U.S. content and Canada imports over $22 billion worth of automotive parts from the U.S. annually.”

Reviving the threat of tariffs

The letter asks senators “not to discriminate against” Canada and to work together to build electric cars in a way that does not undermine the integrated continental carmaking industry.

“We want to be clear that if there is no satisfactory resolution to this matter, Canada will defend its national interests, as we did when we were faced with unjustified tariffs on Canadian steel and aluminum,” the letter says.

In 2019, the U.S. Department of Commerce slapped tariffs of 25 per cent on imports of steel and 10 per cent on aluminum, citing national security interests. Canada, Mexico and a number of other countries were affected.

Canada retaliated with its own tariffs of 25 per cent on steel and 10 per cent on aluminum, and also imposed a 10 per cent tariff on multiple consumer items, targeting U.S. politicians in states where those products are made.

That product list included Kentucky bourbon, lawn mowers, ketchup, maple syrup, appliances, boats and many other items. The federal government said it was targeting goods that Canadians could otherwise buy from domestic suppliers.

‘We do not wish to go down a path of confrontation’

The letter threatens “tariffs on American exports in a manner that will impact American workers in the auto sector” and tariffs on U.S. consumer items.

“In the coming days, we are preparing to publish a list of U.S. products that may face Canadian tariffs if there is no satisfactory resolution of this issue,” the letter said.

“To be clear, we do not wish to go down a path of confrontation,” the letter says. “That has not been the history of the relationship between our two countries – nor should it be the future.