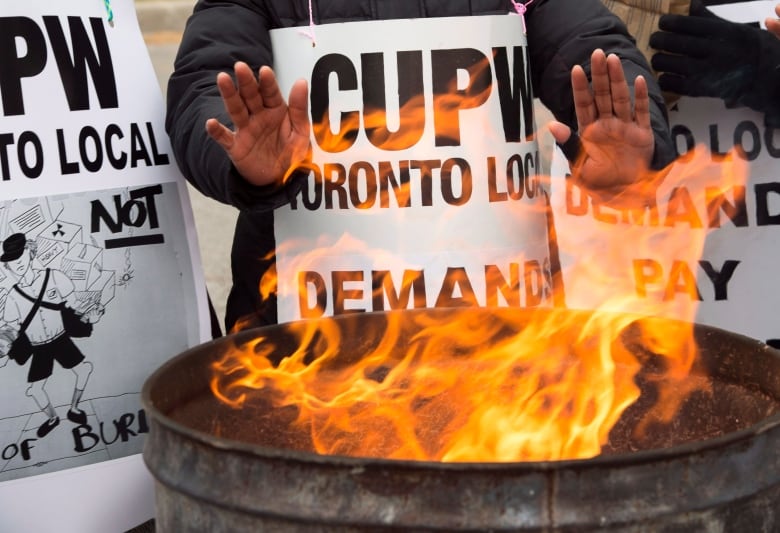 The Canada Post of today that finds itself struggling through rotating strikes is a very different organization from the postal service that last saw labour disruptions.

Back in 2011, as the company faced a labour dispute that led to its first loss in 17 years, then-CEO Deepak Chopra unveiled a plan to restructure the centuries-old institution to adapt to major structural changes brought on by the internet, including both a plunge in letter mail and a rise in packages.

“Starting in 2007, letter volumes started to collapse like a stone,” said Ian Lee, an associate professor at Carleton University’s Sprott School of Business in Ottawa, who has studied the Crown corporation.

By 2011 the Canada Post Group of Companies, which includes subsidiary Purolator Holdings Ltd., and others, was handling about 10 billion pieces of mail a year for a 1.8-billion drop from 2007. 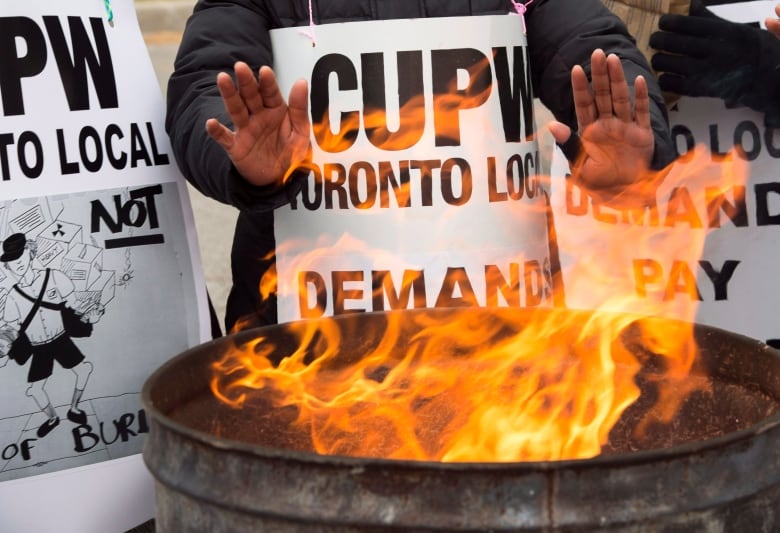 Striking Canada Post workers keep their hands warm as they picket at a Toronto sorting facility Nov. 13. A mediator has been appointed by the federal labour minister to settle the dispute. (Frank Gunn/Canadian Press)

Last year, total volume came in at 8.4 billion as the service has sustained a steady drop in its core business of transaction mail made of up letters, bills, statements, invoices and other paperwork that’s now gone digital.

In response, the company switched emphasis to its parcel service, which for years had stood at a fairly stable level.

‘There is no monopoly’

But the transition hasn’t been easy, said Lee, since unlike letter mail, parcel services have stiff competition from major international players like UPS and Fed Ex.

“People say, OK, well great, you lost one product line, you get another product line. It’s not that simple … this is a very competitive space; there is no monopoly.”

Still, a rapid rise in overall parcels being sent out to consumers has helped Canada Post record significant gains in the space.

Parcel volume has climbed from about 143 million packages in 2011 to 242 million last year for an almost 70 per cent increase, as the service has also looked to increase convenience of the service with delivery lockers, self-service drop-offs, and same day delivery in Toronto and Montreal.

Many of those parcels are awaiting delivery in a reported 600 parked trailers of undelivered mail, a backlog created by rotating strikes that began one month ago.

Federal Labour Minister Patricia Hadju said Tuesday her office was reappointing a special mediator and that the government would consider legislating postal employees back to work if a solution isn’t reach in a few days.

In a 2016 annual report, Canada Post said it delivered nearly two-thirds of online orders by Canadians.

Canada Post, which for over 200 years was a protected monopoly of the state, is dying before our eyes, but the culture hasn’t caught up.– Ian Lee, business prof, Carleton University

Lee said the service has been competitive, offering somewhat cheaper rates than private operators, but it’s been saddled with labour costs, a large pension obligation, and a culture slow to change.

“Canada Post, which for over 200 years was a protected monopoly of the state, is dying before our eyes, but the culture hasn’t caught up,” he said. 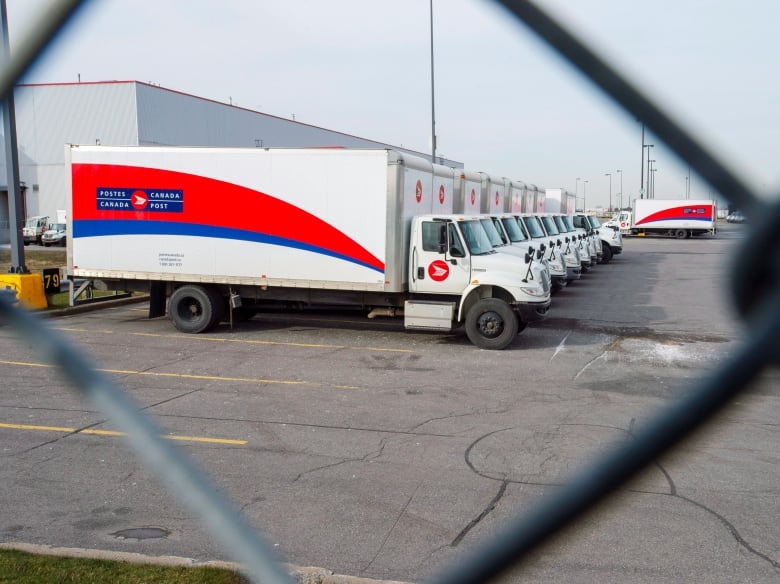 Pivoting has been hampered by difficult labour relations, pension obligations, as well as the structure of the service itself, said Malcolm Bird, associate professor of political science at the University of Winnipeg.

“They’ve got difficult labour relations, political interference in their operations, they’ve got to deliver mail to everywhere regardless of the cost, so there may be a few little advantages, but I suspect they would be far outweighed by their public service role.”

A government discussion paper noted that labour costs are about 41 per cent higher than comparable businesses in the private sector.

Canada Post has to deliver to every address in Canada, but the number of addresses are increasing while each customer is using the service less. Parcel deliveries is a way to offset some of its costly obligations, said Bird.

“Canada post, in raw political terms, it provides mail and package delivery services to rural and small town Canada, and the North, places where private companies provide limited service, if at all…. This universal service obligation is at the absolute core of its political mandate.”

The requirements of delivery are what pushed the service into the community mailbox program and away from door-to-door delivery, a move that was expected to save about $400 million a year before the Trudeau government shelved the plan.

Despite steady declines of between four and eight per cent per year, letter mail still provides the bulk of Canada Post’s revenues. Last year, transactional mail pulled in $2.9 billion to make up 45 per cent of revenue, down from $3.2 billion or 54 per cent in 2011. Advertising, or direct marketing mail, makes up the other main segment for the service at $1.1 billion in revenue last year. 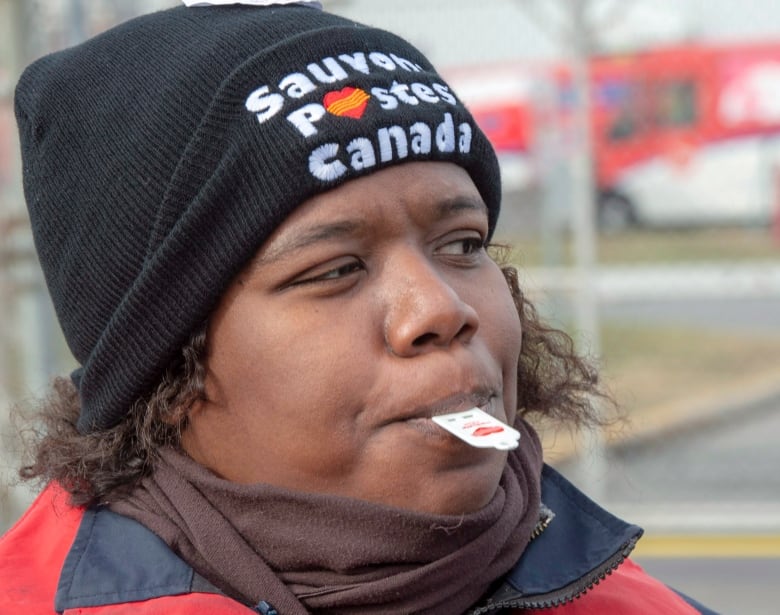 A striking Canada Post worker walks the picket line in front of the Saint-Laurent facility, on Nov. 15. Companies have been using the strikes to encourage customers to switch to online billing. (Ryan Remiorz/Canadian Press)

The strike, however, threatens its core business further, since companies have been using it to encourage more people to switch to digital, said Bird.

“Every single company that still provides paper letters, paper bills to people, is trying to use these rotating strikes to make even more people go on to electronic bills and get rid of paper.”

The rotating strike has also shown the waning necessity of the postal service, said Lee.

“They had enormous leverage in the 1960s, ’70s, ’80s, ’90s because the strike would cripple, literally cripple, the economy because it brought the payment system to its knees.”

Today it is an inconvenience for small businesses and customers ordering online, but hardly critical, he said.

“It’s a bit of an inconvenience, but it’s not the end of the world like it once was.”