Canada might have too much party discipline, but that’s at least better than too little 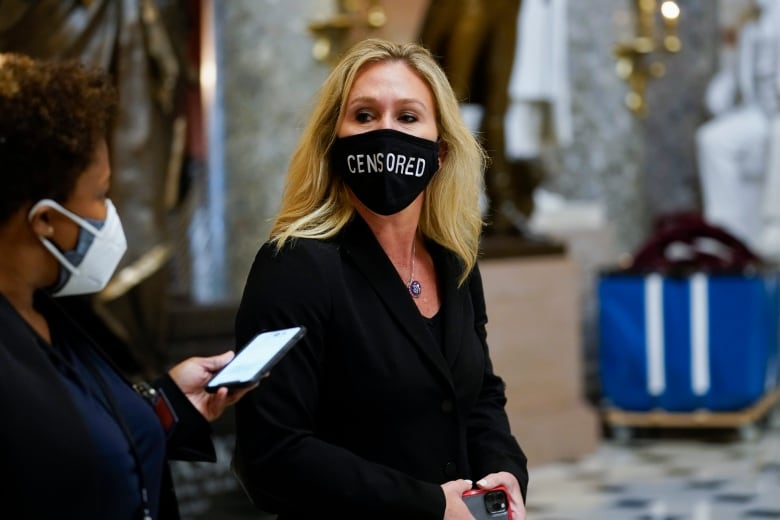 O’Toole quickly moved to have Sloan removed from the Conservative caucus and, after a vote of Conservative MPs, Sloan was stripped of his party affiliation and left to sit as an independent MP. Unless he is readmitted to the party, Sloan will be unable to run as a Conservative in the next election. And unless Sloan does catch on with a major party, his chances of being re-elected are vanishingly slim.

While the Conservaitve party tries to move on from Sloan, the Republican Party in the United States is struggling to manage its own troublesome representative. Taylor Greene has espoused wild conspiracy theories and endorsed violent threats against Democratic politicians. Republican Senate leader Mitch McConnell suggested that her views were a “cancer” within his party. But Republican leaders in the House of Representatives have been reluctant to sanction her, presumably because doing so might anger some crucial segment of their party’s supporters.

That is a significant difference. In Canada, a major political party has to worry that being associated with a candidate who has extreme or objectionable views will cost them a significant number of votes. In the United States, at this moment, a major political party has to decide whether punishing a representative with extreme or objectionable views will actually hurt them more than it helps them.

Different facets of the Canadian political system might promote moderation, including an electoral map and system that seem to require parties to appeal across a broad swath of demographics and geography to win power.

Candidates get pulled to the extremes by primary voters and then attempt to mainstream those extremist views to make it easier for their party to win the general election.– Ian Shapiro

But it’s also plausible that a candidate like Taylor Greene never would have been able to run for a major political party in Canada in the first place. In Canada, the process for selecting candidates in each riding is strictly overseen by the political parties and her inflammatory history likely would have been noticed during the vetting process that all major parties conduct before allowing anyone to run for a nomination.

In the United States, candidates are nominated through open primaries: Taylor Greene won a primary for the Republican nomination in Georgia’s 14th congressional district last June. Leaders and senior figures in a party can still endorse a particular candidate or attempt to exert their influence in other ways, but ultimately it is up to people who vote in primaries.

Those intra-party races, it has been argued, tend to reward candidates who are politically extreme. “The basic problem with them today is they are usually marked by very low turnout and the people on the fringes of the parties vote disproportionately in them,” Ian Shapiro, a Yale professor of political science explained in an interview last year. Successful candidates then push and pull the party and its supporters to match those extreme views.

“Candidates get pulled to the extremes by primary voters and then attempt to mainstream those extremist views to make it easier for their party to win the general election,” Shapiro said.

Shapiro and Frances McCall Rosenbluth, co-authors of Responsible Parties: Saving Democracy from Itself, have argued that part of the problem in American democracy is that it’s political parties are actually too weak; a party’s establishment figures have less ability to control the direction of the party or weed out undesirable members. In How Democracies Die, Steven Levitsky and Daniel Ziblatt similarly argue that parties are supposed to act as “gatekeepers” that keep extremists out.

The weakness of American parties is not all bad: someone like Alexandria Ocasio-Cortez, now one of the most influential politicians in the United States, might not have come to the fore if the Democratic party’s establishment had more control over the nomination process. But a strong and properly functioning Republican party probably would not have allowed Donald Trump to win its presidential nomination. And after allowing the extremists in, the Republican party now seems unwilling or unable to tell them to leave.

In the abstract, it might seem more democratic to call for total openness. But it might be understood that political parties can play an important role in keeping a country’s political debate on the tracks by shunning the most extreme views and aiming to appeal to the broadest swath of voters.

In Canada, party leadership races might have a similar vulnerability. Though not quite as wide open as presidential primaries, leaders are still chosen by national votes of party supporters in a manner that can’t be easily controlled by MPs or senior party figures. But at the riding level, the gates are strongly enforced. Parties scramble to revoke the nominations of candidates who cause controversy during election campaigns and troublesome MPs are regularly ejected from party caucuses in between elections.

For the most part, that control is a source of frustration; and not without good reason. Overbearing party discipline can reduce MPs and candidates to robotic spokespeople and foot soldiers for their parties and leaders. For decades, Canada’s political parties have been thought to be far too strong (last year, political scientist Alex Marland published a thorough exploration of that phenomenon, appropriately entitled Whipped).

Ideally, there might be a few more MPs like Nathaniel Erskine-Smith, a Liberal backbencher who has established himself as an independent voice while still supporting his party.

But the case of Derek Sloan is actually also a reminder of the last concerted attempt to reduce the control exerted by federal parties in Canada. His ejection was only possible after a formal vote of the Conservative caucus, a mechanism that was introduced by the Reform Act, a private member’s bill that was put forward in 2013 by Conservative MP Michael Chong. Before Chong’s bill, Sloan could have been ejected from caucus at O’Toole’s sole discretion.

In its original form, the Reform Act would have gone much further. Most dramatically, it would have put the authority for selecting candidates at the riding level. Back then it was a lot easier to admire the American political system and its open primaries and independent legislators. But concerns were raised about the sort of candidates who might end up on the ballot if a party was unable to exert significant control and Chong abandoned the change.

Chong’s basic concern, that Canadian parties and leaders exert too much power and control over individual MPs and candidates, remains relevant. And the choice is not simply between strong Canadian-style parties and weak American-style parties. (In the middle of those two would be something like the more loosely whipped British parties.)

But a democracy might be better off with too much party control rather than too little.