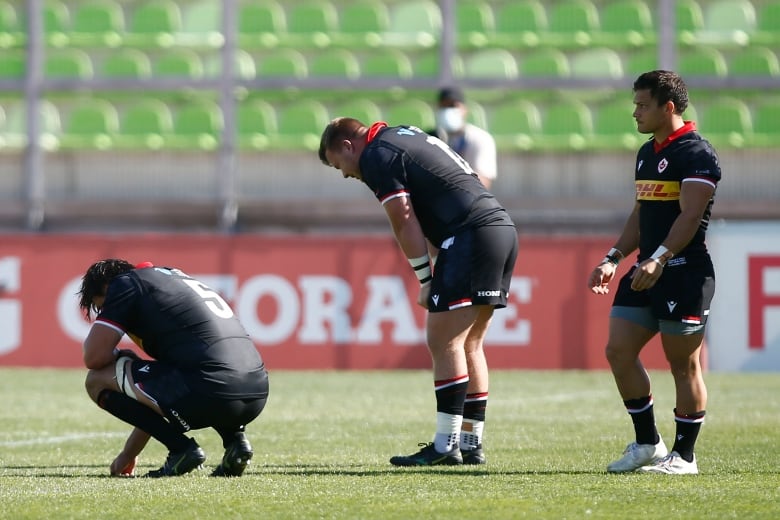 The Canadian men will watch the 2023 Rugby World Cup from afar, denied a trip to the sport’s showcase for the first time ever after a 33-24 defeat to Chile on Saturday that gave the South Americans a 54-46 aggregate victory in the two-legged qualifying series.

The 21st-ranked Canadian men held a slim lead over No. 28 Chile after their 22-21 opening-leg win last Saturday in Langford, B.C., with Robbie Povey’s late penalty giving Canada the edge.

Little went right for Canada after taking an early 3-0 lead in Saturday’s rematch, however. Chile reeled off 16 straight points to lead 16-3 on the day and 12 points on aggregate at halftime. And when Canada tried to cut the gap in the second half, the Chileans kept answering.

“It’s tough right now,” Canada coach Kingsley Jones said after the match. “The changing room is not a pleasant place. A lot of the boys are really upset, of course. It’s tough. I feel for them.

“We lost the game today. Chile were better than us today. They took their opportunities.”

Also Saturday, Uruguay defeated the U.S. Eagles 34-15 in Montevideo for a 50-34 aggregate victory that qualifies Los Teros for France 2023 as Americas 1 alongside No. 2 New Zealand, No. 6 France, No. 14 Italy and Africa 1 in Pool A. It will mark Uruguay’s fifth trip to the World Cup.

Chile, looking to qualify for the first time, will now meet the U.S. to decide who qualifies as Americas 2 alongside No. 4 England, No. 8 Argentina, No. 10 Japan and No. 13 Samoa in Pool D.

The loser of that Americas 2 playoff still has a chance to qualify via the World Cup repechage — the route Canada had to take last time out to get to the 2019 tournament in Japan.

No. 23 in world rankings

The Canadians, who were coming off a 59-50 aggregate loss to the U.S in their first qualifying attempt, can only watch and wonder what went wrong.

Saturday’s loss will drop Canada to No. 23 in the world rankings, with Hong Kong and Russia moving up, while Chile will climb to No. 26, its highest ranking since February 2018.

The 16th-ranked U.S. Eagles defeated No. 17 Uruguay 19-16 to open their two-legged playoff in Glendale, Colo. The second leg was later Saturday at Estadio Charrua in Montevideo.

Missed contention another blow in string of setbacks

The Canadian men had qualified for all nine previous editions of the World Cup, stretching back to 1987.

“None of us wanted to be part of the first team not to qualify for Rugby World Cup,” said Jones.

Failing to qualify will significantly impact Rugby Canada’s bottom line, given World Cup qualification carries with it a financial boost from World Rugby. It represents another setback, coming after the women’s seven team — bronze medallists at the 2016 Rio Olympics — finished ninth this summer in Tokyo.

And it is another body blow to a governing body that made headlines for all the wrong reasons earlier this year when past and present members of that women’s sevens team launched a formal complaint under Rugby Canada’s bullying and harassment policy.

The pandemic meant Jones had few opportunities to test his team ahead of qualifying series against the U.S. — Canada lost 59-50 in that aggregate series — and Chile. Canada had played just twice since the 2019 World Cup prior to starting qualification for the 2023 tournament.

Jones, the former Wales captain opted for a young squad, one that bodes well for the future but had little time playing together in the cauldron of test rugby.

“There’s a lot of good young players. It’s keeping these guys together now and also growing players around them and beneath them to make sure our depth keeps going,” he said.

Whether Jones, who took over the team in September 2017, remains is also in question. Rugby Canada has parted ways with coaches in the past after disappointing showings. But Jones’ focus on youth and developing talent may win his employer over.

The Welshman was given additional duties in August 2019 when he was named director of men’s performance rugby.

On Saturday the performance came from Chile, which put Canada under pressure and took advantage.

“We’re getting caught up,” he added. “I’ve made that point before and I don’t think anyone can deny that when you watch the way Chile played. The competition for World Cup spots has become very very competitive and we’ve missed out.”

Chile had lost all seven previous meetings with Canada, outscored 267-83. The South Americans have never qualified for the World Cup, positing a 14-15-0 career record in qualifying prior to Saturday.

Chile showed early purpose, driving at the Canadians. But the visitors scored first.

Back-to-back early penalties against Chile moved Canada five metres from the Chilean try line. A third penalty allowed Nelson to kick for the posts and a 3-0 lead on the day after just five minutes.

Chile won the restart — something that happened all too often on the day — and then a penalty at the breakdown. Two Videla penalties put Chile ahead 6-3 after 17 minutes.

Chile pulled further ahead in the 24th minute on a converted try by Fernandez, a magnificent solo effort that saw the fly half soar high in the air to pull down a Ross Braude box kick and then run through the Canadian defence to score under the posts for a 13-3 lead.

Canada roared straight back but lost the ball near the Chile try-line when the Chileans stalled a driving maul.

Another Fernandez run, this time after a blocked kick, opened up the Canadian defence and the Chilean forwards laid siege on the Canadian try-line. But the Canadians held firm and won a turnover to end the threat.

Another penalty against Canada — for a lineout infraction — and Videla’s boot gave Chile a 16-3 lead in the 34th minute.

Argentine referee Nehuen Jauri Rivero warned Chile early in the second half for repeated infringements. And minutes later, hooker Augusto Bohme was sent to the sin-bin for taking out the man in a lineout.

Howard scored off a maul from the ensuing lineout near the Chile try-line to cut the lead, with Nelson’s conversion, to 16-10 in the 46th minute.

An error on the ensuing restart typified Canada’s day. And another penalty prompted the referee to warn Canadian captain Lucas Rumball to stop the infractions or else.

With the hooker still in the sin-bin, Chile took a tap-and-go penalty from in-close and eventually bulled over for another try via Dittus. The conversion extended Chile’s lead to 23-10.

Canada prop Djustice Sears-Duru was sent to the sin-bin in the 60th minute after another Canadian penalty. Videla kicked the penalty for a 26-10 lead.

A Chile penalty gave Canada a lineout at the five-metre line and Quattrin went over at the back of the driving maul in the 66th minute. Nelson’s conversion cut the lead to 26-17.

A slashing Fernandez run opened up the Canadian defence yet again and the elusive fly half passed to Videla to score in the corner in the 70th minute. The conversion upped the lead to 33-17.

Substitute Chile prop Salvador Lues was sin-binned in the 74th minute, paying the price for repeated Chilean infractions. Canada pressed at the end but knocked the ball on at the try-line. Lloyd scored a consolation converted try in the 80th minute to make it 33-24.

Jones made two changes to his starting lineup for Saturday’s rematch.

Former captain Tyler Ardron, back from his Castres Olympique team in France, came in for Matt Heaton at flanker while Patrick Parfrey slotted in for Cooper Coats. Prop Matt Tierney and wing/centre Quinn Ngawati joined the Canadian replacements, replacing Jake Ilnicki and Parfrey.

Heaton and Coats did not make the 10,400-kilometre trip to Chile.

Canada’s starting 15 featured seven members of the Toronto Arrows, with another three among the replacements.

The Canadians were coming off a 59-50 aggregate loss to the U.S. that moved the Americans into the playoff with Uruguay, with the winner qualifying for France 2023 as Americas 1 alongside No. 1 New Zealand, No. 6 France, No. 14 Italy and Africa 1 in Pool A.

Argentina qualified automatically from the Americas by virtue of its performance at the 2019 World Cup in Japan. Uruguay became the top qualifying seed in South America by winning a three-team tournament that also included Chile and Brazil.

The Chileans moved into the Americas 2 playoff on the strength of their second-place finish at that competition.