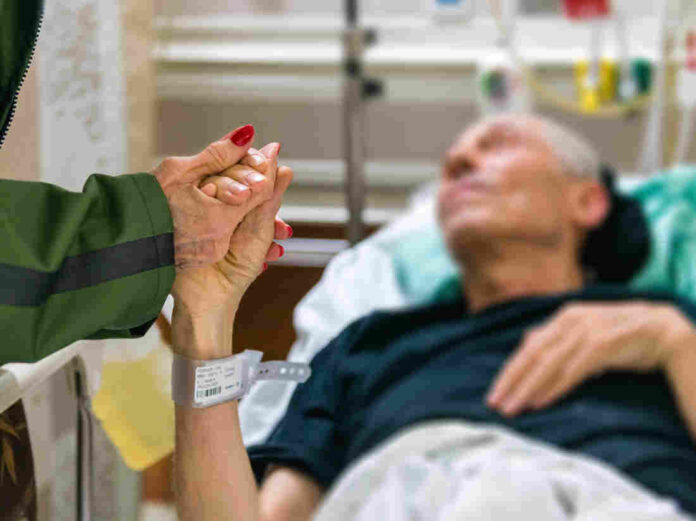 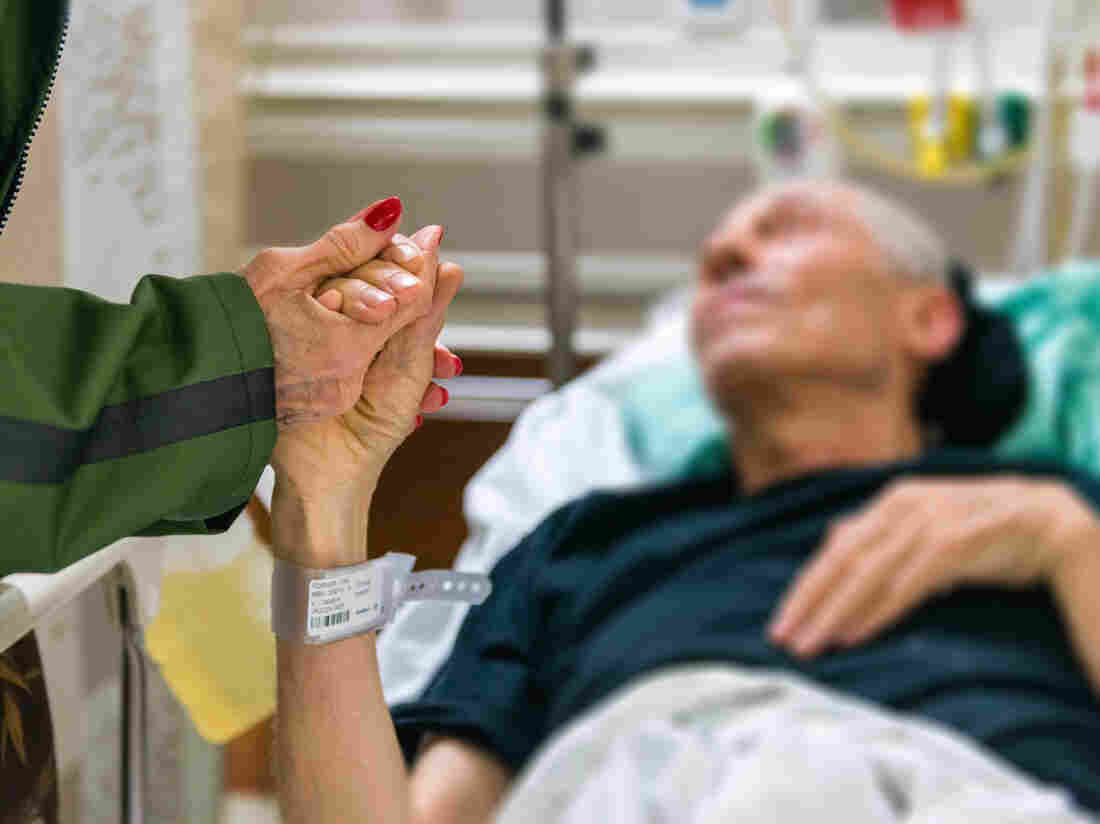 As baby boomers age, more older Americans are visiting the emergency room, which can be an overcrowded, disorienting and even traumatic place. Heidi de Marco/Kaiser Health News hide caption

As baby boomers age, more older Americans are visiting the emergency room, which can be an overcrowded, disorienting and even traumatic place.

A man sobbed in a New York emergency room. His elderly wife, who suffered from advanced dementia, had just had a breathing tube stuck down her throat. He knew she never would have wanted that. Now he had to decide whether to reverse the life-sustaining treatment that medics had begun.

When Dr. Kei Ouchi faced this family as a young resident at Long Island Jewish Medical Center, he had no idea what to say. The husband, who had cared for his wife for the past 10 years, knew her condition had declined so much that she wouldn’t want to be rescued. But when Ouchi offered to take out the tube, the man cried more: “She’s breathing. How can we stop that?”

Ouchi had pursued emergency medicine to rescue victims of gunshot wounds and car crashes. He was unprepared, he says, for what he encountered: a stream of older patients with serious illnesses like dementia, cancer and heart disease — patients for whom the life-saving techniques he was trained to perform often only prolonged the suffering.

As baby boomers age, more of them are visiting the emergency room, which can be an overcrowded, disorienting and even traumatic place. Adults 65 and older made 20.8 million emergency room visits in 2013, up from 16.2 million in 2000, according to the most recent hospital survey by the Centers for Disease Control and Prevention. The survey found 1 in 6 visits to the ER were made by an older patient, a proportion that’s expected to rise.

Half of adults in this age group visit the ER in their last month of life, according to a study in the journal Health Affairs. Of those, half die in the hospital, even though most people say they’d prefer to die at home.

Some states on board

The influx is prompting more clinicians to rethink what happens in the fast-paced emergency room, where the default is to do everything possible to extend life. Hospitals across the country — including in Ohio, Texas, Virginia and New Jersey — are bringing palliative care, which focuses on improving quality of life for patients with advanced illness, into the emergency department.

Interest is growing among doctors: 149 emergency physicians have become certified in palliative care since that option became available just over a decade ago, and others are working closely with palliative care teams. But efforts to transform the ER face significant challenges, including a lack of time, staffing and expertise, not to mention a culture clash.

Researchers who interviewed emergency room staff at two Boston hospitals, for instance, found resistance to palliative care. ER doctors questioned how they could handle delicate end-of-life conversations for patients they barely knew. Others argued that the ER, with its “cold, simple rooms” and drunken patients screaming, is not an appropriate place to provide palliative care, which tends to physical, psychological and spiritual needs.

Ouchi saw some of these challenges during his residency in New York, when he visited the homes of older patients who frequently visited the emergency room. He saw how obstacles like transportation, frailty and poor vision made it difficult for them to leave the house to see a doctor.

When these patients arrive at the emergency room, doctors treat their acute symptoms, but not their underlying needs, Ouchi says. In more severe cases, when the patient can’t talk and doesn’t have an advanced directive or a medical decision-maker available, doctors pursue the most aggressive care possible to keep them alive: CPR, intravenous fluids, breathing tubes.

“Our default in the ER is pedal to the metal,” says Dr. Corita Grudzen, an emergency physician at NYU Langone Medical Center who studies palliative care in the ER. But when doctors learn after the fact that the patient would not have wanted that, the emergency rescue forces families to choose whether to remove life support.

When older adults are very ill — if they need an IV drip to maintain blood pressure, a ventilator to breathe, or medication to restart the heart — they are most likely to end up in an intensive care unit, where the risk of developing hospital-acquired infections and delirium is increased, Grudzen says. Meanwhile, it’s not clear whether these aggressive interventions really extend their lives, she adds.

Some have sought to address these problems by creating separate, quieter emergency rooms for older patients. Others say bringing palliative care consultations into regular emergency rooms could reduce hospitalization, drive down costs and even extend life.

There’s no hard evidence that this approach will live up to its promise. The only major randomized controlled trial, which Grudzen led at Mount Sinai Hospital in New York City, found that palliative care consultations in the emergency room improved quality of life for cancer patients. It did not find statistically significant evidence that the consultations improved rates of survival, depression, ICU admission or discharge to hospice.

But frontline doctors say they’re seeing how palliative care in the ER can avert suffering. For instance, Ouchi recalls one patient — a man, in his late 60s — who showed up at the emergency room for the fifth time in six months with fever and back pain. Previous visits hadn’t addressed the underlying problem: The man was dying of cancer.

This time, a nurse and social worker called in a palliative care team, who talked to the patient about his goals.

“All he wanted was to be comfortable at home,” Ouchi says. The man enrolled in hospice, a form of palliative care for terminally ill patients. He died about six months later, at home.

Now Ouchi and others are trying to come up with systematic ways to identify which patients could benefit from palliative care.

One such screening tool, dubbed P-CaRES, developed at Brown University in Providence, R.I., gives ER doctors a list of questions. Does the patient have life-limiting conditions such as advanced dementia or sepsis? How often does the patient visit the ER? Would the doctor be surprised if the patient died within 12 months?

Doctors are using the tool to refer patients at the University of California-San Francisco Medical Center at Parnassus to palliative care doctors, says Dr. Kalie Dove-Maguire, a clinical instructor there. The questions pop up automatically on the electronic medical record for every ER patient who is about to be admitted to the hospital.

Dove-Maguire says UCSF hasn’t published results, but the tool has helped individual patients, including a middle-aged man with widespread cancer who showed up at the ER with low blood pressure. The man “would have been admitted to the ICU with lines and tubes and invasive procedures,” she says, but staff talked to his family, learned his wishes and sent him to home hospice.

“Having that conversation in the ER, which is the entry point to the hospital, is vital,” Dove-Maguire says.

But time is scarce in ERs. Doctors’ performance is measured in minutes, Grudzen notes, and the longer they stop to make calls to refer one patient to hospice, the more patients line up waiting for a bed.

Finding someone to have conversations about a patient’s goals of care can be difficult, too. Ouchi enlisted ER doctors to use the screening tool for 207 older ER patients at Brigham and Women’s Hospital in Boston, where he now works as an emergency physician. They found a third of the patients would have benefited from a palliative care consultation. But there aren’t nearly enough palliative care doctors to provide that level of care, Ouchi says.

“The workforce for specialty palliative care is tiny, and the need is growing,” says Grudzen.

Palliative care is a relatively new specialty, and there’s a national shortfall of as many as 18,000 palliative care doctors, according to one estimate.

“We’ve got to teach cardiologists, intensivists, emergency physicians, how to do palliative care,” she said. “We really have to teach ourselves the skills.”

Kaiser Health News is an editorially independent part of the Kaiser Family Foundation.